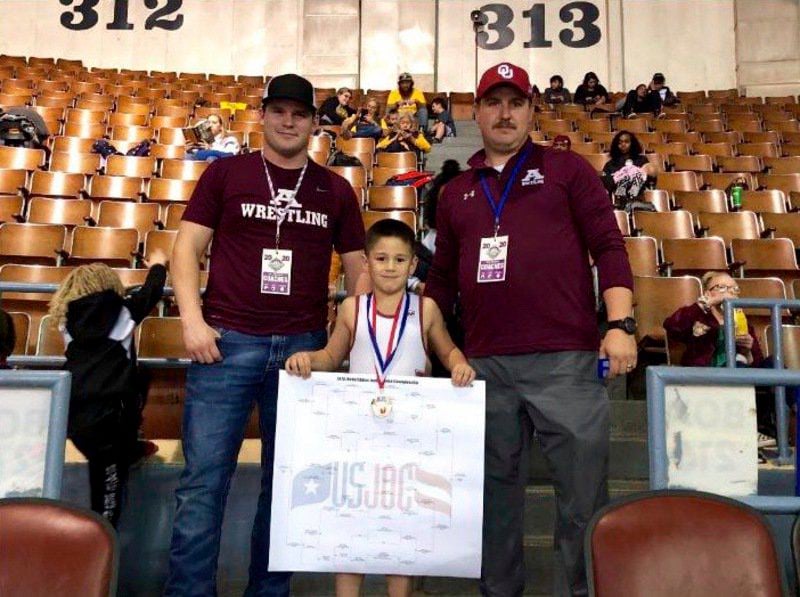 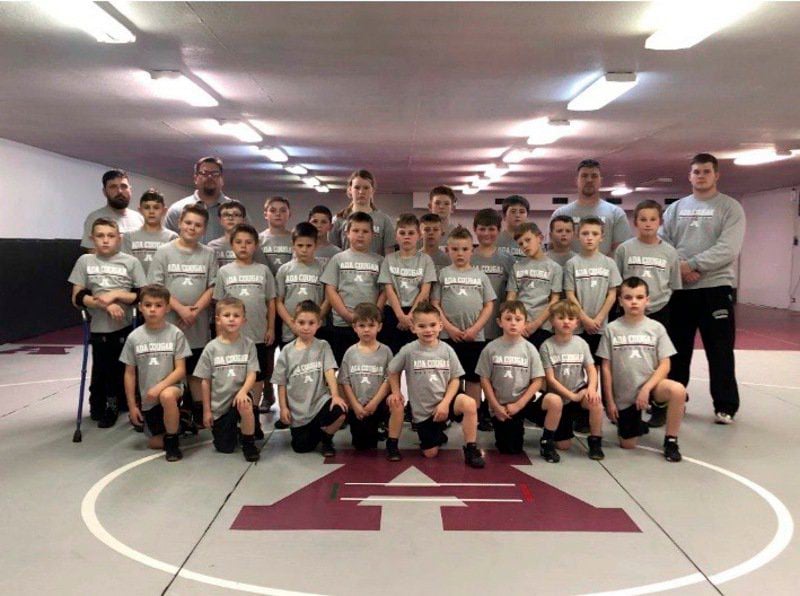 Ada Youth WrestlingMembers of the Ada Youth Wrestling program and their coaches gather for a team photo near the end of their 2019-20 season. The group competed in a total of 611 matches and brought home 130 medals from 11 different tournaments.

Ada Youth WrestlingMembers of the Ada Youth Wrestling program and their coaches gather for a team photo near the end of their 2019-20 season. The group competed in a total of 611 matches and brought home 130 medals from 11 different tournaments.

The Ada Youth Wrestling program is taking off.

Coaches Colton Lancaster (the head coach), Ken Forshay, Billy Price and Jason Howell have had as many as 40 local athletes — ranging from 5 years old to 15 and under — at a given practice session during the 2019-20 wrestling season.

Almost 20 wrestlers represented the local group at tournaments all across the state this season, which began in late November and ended with the OKUSA YWL State Tournament, held Jan. 31-Feb. 1 at the Jim Norick Arena in Oklahoma City.

Lancaster, a 2015 graduate of Ada High, said participation in Ada Youth Wrestling has more than doubled in recent years.

“In 2013, we had nothing but a couple of parents who took their kids on the weekends to maybe three tournaments a year,” Lancaster said.

Back then, the youth wrestling program was part of the Ada Boys & Girls Club. Now, Ada Youth Wrestling falls under the umbrella and is an independent affiliate program of OKUSA Wrestling.

“This is my second season to be independent from the Boys and Girls club and Ada High School,” Lancaster said.

Ada High Wrestling coach Kyle Bohannon previously ran the Ada Youth Wrestling program, but it became too taxing to lead both programs, and he handed the reins to Lancaster.

“Coach Bohannon was overworked and never got to see his family due to coaching youth on his only nights available when he wasn’t with the high school,” Lancaster explained. “He asked me to come help out one night with the youth, and I was hooked from that day on. Each year, he slowly gave me a little bit more freedom to do as I see fit with the program.”

Now, Lancaster has put together a strong group of coaches.

“Our coaching staff has grown tremendously. Ken Forshay and Jason Howell have been two huge additions to our program. Because of them, practice doesn’t have to get canceled if I’m sick or have a scheduling conflict, whereas in years previous if I wasn’t available, we weren’t going to practice or attend a tournament,” Lancaster said. “Billy Price also helped out this season, and next season we are excited to have Luke Johnston back on staff.”

The results for this year’s young wrestlers speak for themselves. Athletes representing Ada Youth Wrestling competed in 611 matches throughout the 2019-20 season and ended with a record of 340 wins and 270 losses. The local wrestlers competed in 11 tournaments overall and brought home 130 medals — 29 for first place, 31 for second, 34 for third, 28 for fourth, four for fifth and three for sixth.

“Hard work and consistency have gotten us where we are today,” Lancaster said.

In the much tougher Open Division, Makenna Howell placed third (in the girls bracket) and Slayden Hunt finished fifth at state.

“We are a very competitive in the novice division and growing our open program tremendously,” Lancaster said. “We had many novice placers and many kids that won first place nearly every weekend. We have far too many accomplished wrestlers to list them by name.”

Hunt — one of the top local youth wrestlers in the program — also captured a novice USJOC championship and a novice Tulsa Nationals runner-up finish before competing in the Open Division at state.

Lancaster said it’s time for some of his novice wrestlers to start competing in the Open Division.

“This year on average, we would take about 15 novice kids and three open kids to each tournament. Next year, we have about five kids that will be bumped up to the open division due to winning too many medals in novice these last two seasons,” he said. “It will take something special to transition from a tough novice program to a tough open program. 8-year-old Open Division wrestlers compete at a higher level of competition than the vast majority of high school wrestlers.”

“Girls wrestling is growing at a rate unseen in any sport before. Girls’ participation this year is probably 10 times greater than two years ago,” he said. “These girls are tougher than the boys in most cases. A huge goal of ours going into next season is the developments of our girls program.”

“There will be a flood of college scholarships available to these girls in the next decade as more college programs start girls wrestling,” he said.

Lancaster hopes to bring in guest speakers to perform mini-clinics with his bunch in the coming seasons. Shane Cristelli, a former Ada High standout, is at the top of his list.

Lancaster is probably a bit biased, but he believes wrestlers are among the best athletes of any sport.

“No other sport produces better athletes than wrestling. An athlete who has a wrestling background is tough, quick, strong, balanced and flexible. Most importantly, they have a natural grit about them that cannot be taught in other sports,” he said.

Any parents who would like to get their children involved in the Ada Youth Wrestling program can contact Lancaster at (580) 235-7333.

“Ada Youth Wrestling doesn’t need 20 Open champions. Ada wrestling needs 50 new kids each year who learn what hard work, respect, perseverance and determination look like,” he said. “These young men and women are going to be not so young someday and before they get there, we would like to help teach them some life and biblical principles seen within many great leaders through our community and country today.”