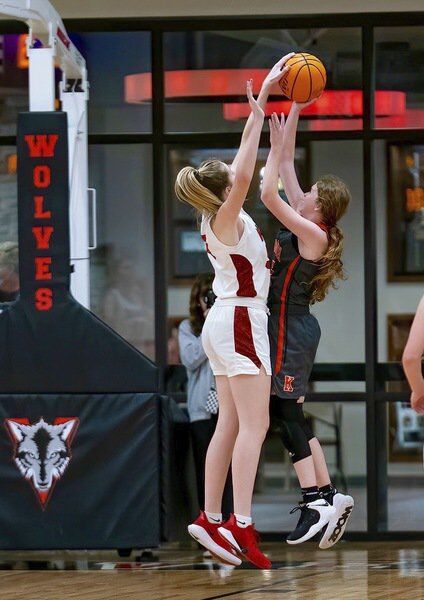 Emrie Ellis of Vanoss blocks a shot attempt by Konawa’s Sarah Gee during their contest Tuesday night inside the Vanoss Activity Center. 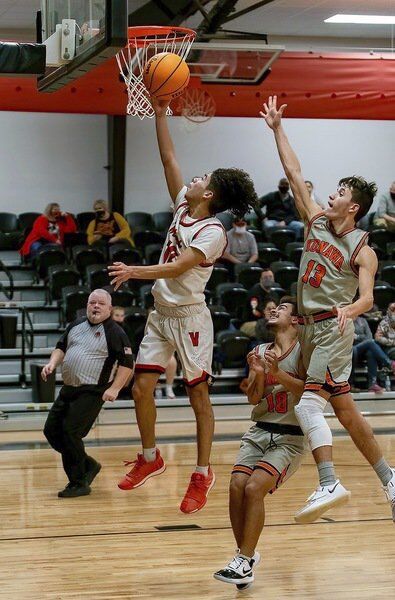 Emrie Ellis of Vanoss blocks a shot attempt by Konawa’s Sarah Gee during their contest Tuesday night inside the Vanoss Activity Center.

VANOSS — The Vanoss Lady Wolves hit five 3-pointers in the first quarter to get off to a hot start and coasted past Konawa 85-28 Tuesday night inside the Kenneth D. Smith Memorial Fieldhouse.

In the boys contest, Hurt — who coaches both VHS team — wasn’t around after being ejected from a contest last week at a tournament in Earlsboro. It turns out, he didn’t miss much as the Wolves rolled past Konawa 68-29.

After the dust had settled, Vanoss had sunk a whopping 13 3-pointers, all throughout the first three quarters.

Konawa got 14 points from Jaylyn Isaacs, who sank four 3-pointers.

Perry hit five 3-pointers that figured into his point total, while Deatherage sank a pair of triples.

No other Vanoss player scored more than five.

The Wolves led just 9-4 after the first quarter but had extended their lead to 28-8 by halftime. Vanoss carried a 50-21 advantage into the fourth period.

Both Vanoss clubs host Asher on Friday and travel to Allen on Saturday.

Konawa is at home against Latta tonight and hosts Earlsboro on Friday.