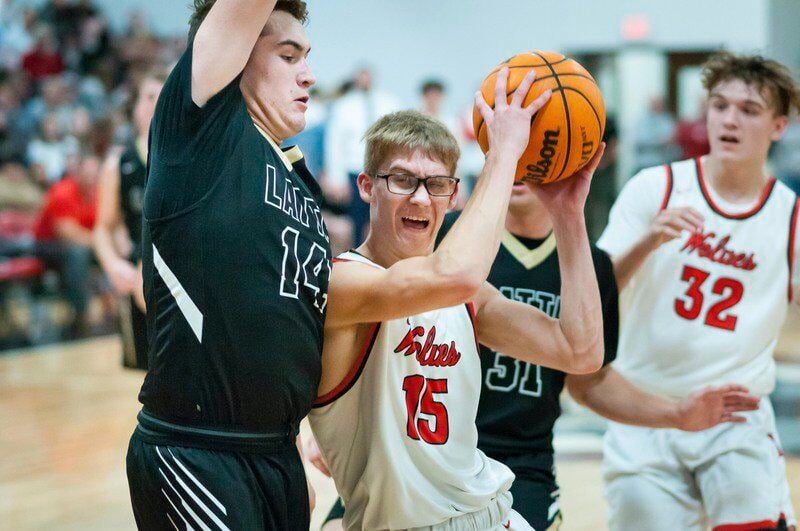 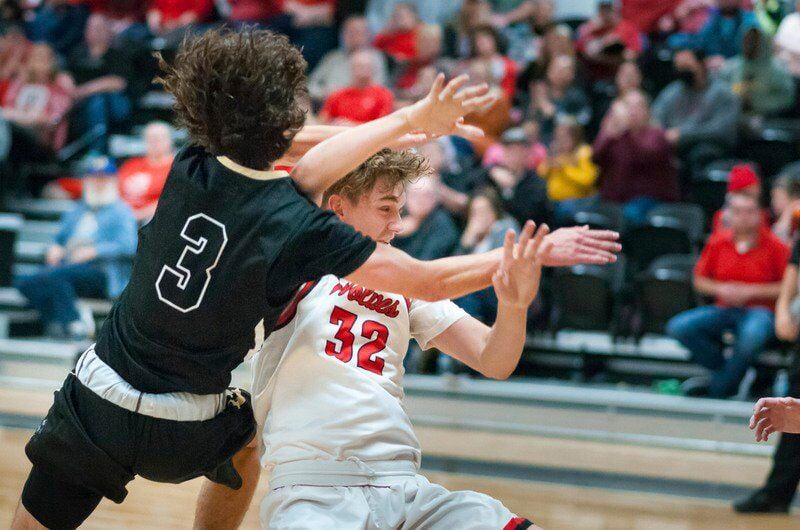 Lincoln Estes (3) of Latta and Logan Hulbatta (32) of Vanoss collide on the court during a contest between the two local teams Friday night in Vanoss. Both teams are now off until after Thanksgiving break.

Lincoln Estes (3) of Latta and Logan Hulbatta (32) of Vanoss collide on the court during a contest between the two local teams Friday night in Vanoss. Both teams are now off until after Thanksgiving break.

VANOSS — Latta senior Tyler Ireland tossed a 3-pointer toward the basket from the top of the key some 28-feet away that clanged off the back of the rim as time was running out and the Vanoss Wolves hung on for a tense 33-31 win Friday night inside the Vanoss Activity Center.

Reece Jordan grabbed the rebound for the Panthers and went back up as the buzzer sounded and was bumped as he missed the putback. It was clear by Jordan’s facial expression that he thought there might have been a Vanoss foul on the shot as the game ended.

“I knew coming into the game they were extremely well-coached. We knew they were going to play their butts off and it was going to be a game between two pretty good defensive teams,” he said. “I think we just had a few more shots fall than they did. If we played them tomorrow, it might go the other way.”

Cooper Coulsen scored on a strong move to the basket with 28 seconds left in the game to get Latta within 33-31.

After a missed free throw with 18 ticks left, Latta was whistled for an “over and back” and was forced to send a Vanoss player to the charity stripe again.

The Wolves failed to convert again with 9.6 seconds left to set up the frenzied finish.

Vanoss held — what seemed to be at the time — a commanding 28-21 lead after Erik Hatton converted an old-fashioned three-point play to end the third quarter.

However, the Panthers limited the usually-explosive Vanoss offense to just four fourth-quarter points and nearly completed a comeback.

Jordan scored on a nice feed from Ireland with just over two minutes left in the second quarter to get Latta within 16-15. But Vanoss ended the first half on a 7-0 spurt to extend its lead to 23-15 at the break.

Vanoss went scoreless over the first five-plus minutes of the third quarter and after Coulsen maneuvered his way inside the paint for a Latta basket, the Panthers had pulled to within 23-21 at the 3:24 mark of the third frame.

Carter Perry paced the Vanoss offense with 11 points and also had three steals before fouling out with just over a minute to play in the game. Logan Hulbatta was next with seven points to go with seven rebounds. Layne Thrower and Brayden Cannon each had six points for the home team. Thrower’s came on a pair of 3-pointers, while Cannon went a perfect 6-of-6 from the free-throw line.

Coulsen and Hamilton paced the LHS offense with 10 points each. Turner added five points and six rebounds off the bench for Latta.

The Panthers missed all four of their free-throw attempts.

Vanoss is at Stratford (Dec. 3) after the Thanksgiving break, while Latta heads to Dale on Nov. 30.