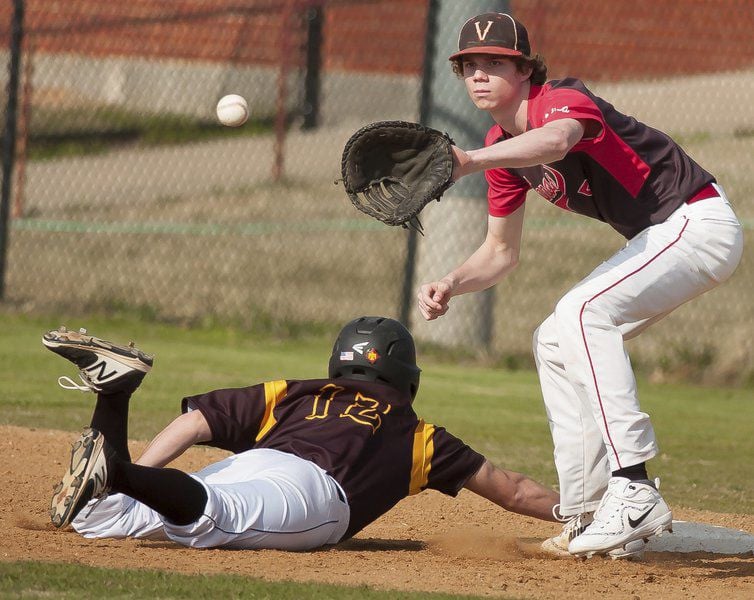 Latta’s Jace Williams (12) dives back to the bag while Vanoss first baseman Colten Bird awaits a throw during a matchup Thursday in Vanoss. The Panthers pounced n Vanoss early in a 15-0 win. 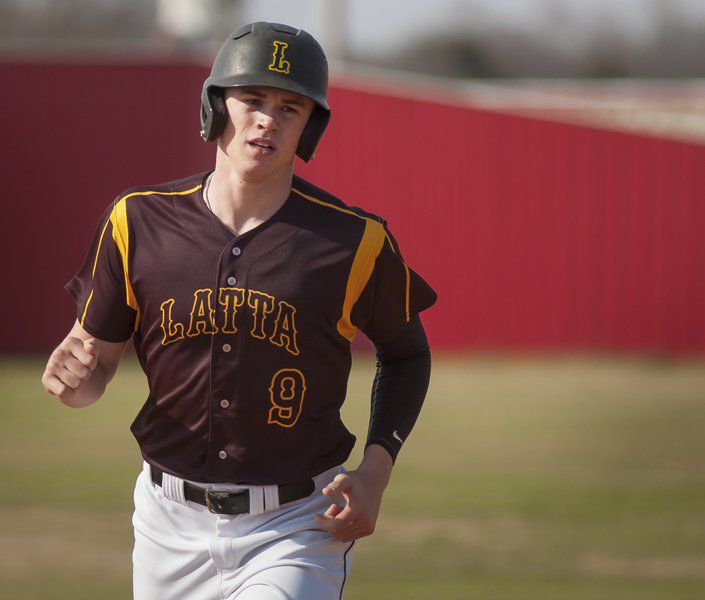 Latta’s Tyler Dean circles the base paths after clubbing one of his two three-run homers in the Panthers’ 15-0 victory over the host Vanoss Wolves Thursday evening.

Latta’s Jace Williams (12) dives back to the bag while Vanoss first baseman Colten Bird awaits a throw during a matchup Thursday in Vanoss. The Panthers pounced n Vanoss early in a 15-0 win.

Latta’s Tyler Dean circles the base paths after clubbing one of his two three-run homers in the Panthers’ 15-0 victory over the host Vanoss Wolves Thursday evening.

The Latta High School baseball team is off to an impressive start to the 2018 spring season.

The Panthers are off to a 3-0 start and have recorded three straight shutout victories. Tyler Dean pitched five shutout innings in Latta’s 9-0 win over Asher and Jacob Savages blanked Prague for six innings in the Panthers’ 8-0 victory over the Red Devils.

The three starting LHS hurlers have combined for three walks and 23 strikeouts in 15 innings of work.

“If we’ll just keep throwing it over on a consistent basis, we’ll have a chance to win. But everybody has a chance to win early,” said Latta head coach Eddie Collins.

Oddly enough, Savage and Dean threw 65 pitches apiece in their mound wins, and Rogers threw 64 in the victory over the Wolves.

Rogers struck out six and walked two in his strong pitching performance.

“He had pretty good stuff, but the only problem was he probably threw too many pitches. He missed with some pitches that he normally doesn’t. But that’s his first start of the year,” Collins said.

The Panthers got an RBI double by Savage and an RBI hit by Dawson Dansby to push across a pair of runs in the top of the first inning against Vanoss and grab a quick 2-0 lead.

Latta then erupted for 15 runs in the top of the third inning. Tyler Dean clubbed a pair of three-run homers in the outburst and finished 2-for-3 with six RBIs. Savage hit a solo home run and a double in the inning and went 3-for-3 with three runs scored.

Jace Williams drove in a pair of runs with an RBI double and a sacrifice fly, while Kyle Rogers and DaeJon Jordan each had RBI singles in the decisive inning.

Jeron Johnston finished 1-for-1 with a double, and was hit by a pitch and scored twice.

A bright spot for the Wolves — who fell to 4-3 — came in the form of freshman pitcher Riley Vasquez, who relieved starter Nathan Stone. Vasquez struck out all four batters he faced.

Latta was scheduled to host Bowlegs in a varsity doubleheader Thursday, but those contests were canceled. The Panthers are now off until they host Class B No. 8 Kiowa at 4:30 p.m. Monday. The Panthers will then head to the Tuttle Tournament later that week.

“It will be a whole new can of worms next week. We play a real good Kiowa team on Monday, and then we go to the Tuttle Tournament. We’ll see a lot of things we have to get better at,” Collins said.

Vanoss was scheduled to host Coalgate (No. 11 in 2A) and Wright City (No. 1 in Class A) in a festival today. The Wolves then head to the Central High Spring Break Festival next Thursday and Friday in Marlow.