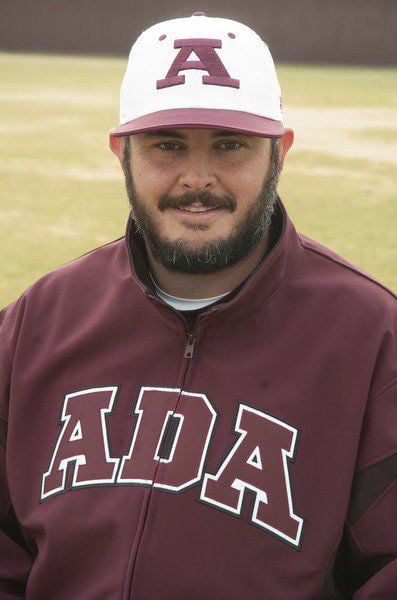 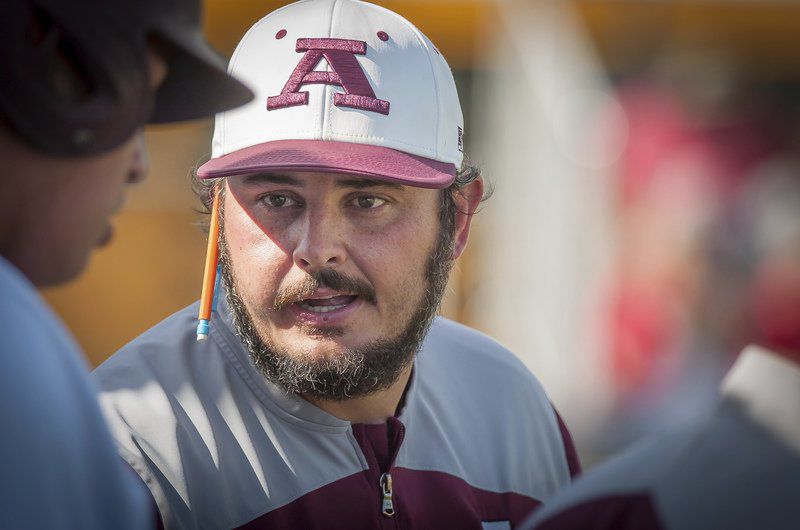 Richard R. Barron/The Ada NewsAustin Jarvis has resigned as the Ada High School baseball coach after receiving letters attacking him and his children shortly following the 2018 spring season, in which the Cougars won 23 games. 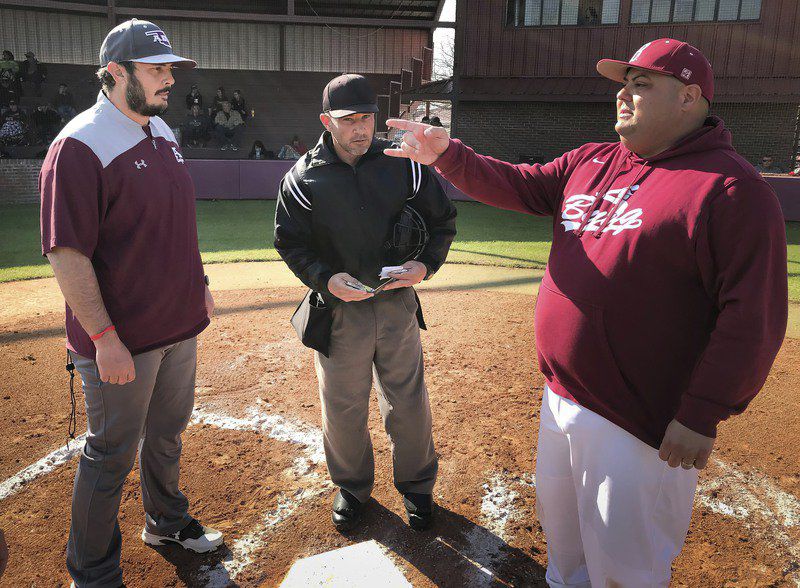 Richard R. Barron/The Ada NewsAda head coach Austin Jarvis, left, and Byng head coach Bubba Tamez visit with an umpire before the two teams played at Stokes Field. After he and his children were attacked in anonymous letters following the season, Jarvis decided to resign his position Friday morning.

Richard R. Barron/The Ada NewsAustin Jarvis has resigned as the Ada High School baseball coach after receiving letters attacking him and his children shortly following the 2018 spring season, in which the Cougars won 23 games.

Richard R. Barron/The Ada NewsAda head coach Austin Jarvis, left, and Byng head coach Bubba Tamez visit with an umpire before the two teams played at Stokes Field. After he and his children were attacked in anonymous letters following the season, Jarvis decided to resign his position Friday morning.

After leading the Ada High baseball team to one of its most successful seasons in recent history, head coach Austin Jarvis announced his resignation Friday morning.

Jarvis took over a Cougar baseball program that had managed just 14 wins combined over its past two seasons. This spring, Ada finished 23-14, won its first-ever Bi-District championship and defeated a 29-win Kingfisher club in the first round of a Class 4A Regional Tournament at Heritage Hall High School.

However, after being eliminated in regional play the following day, Jarvis returned to the Ada High baseball facility and found a couple of nasty, anonymous letters from parents taped to the locker room door.

After some soul-searching with his family over the past couple of weeks, he decided the situation merited that he move on and turn in his resignation.

“First of all, I don’t even have another job to go to. You may call me crazy for that,” Jarvis told The Ada News Friday morning.

Jarvis revealed the content of the letters that were waiting on him after he and the team made it back to Ada the night of May 4.

“This is basically what it said. ‘You’re obviously a good coach, but you’re not a good fit for Ada and you need to find somewhere else to go. It also said, ‘Your kids have brought down the school and are bad influences and have negatively affected the team and school.’ Both my daughter and my son were named. That was our welcome home after the regional tournament,” he recalled.

“They also attacked my faith and my Christianity and basically accused me of not being a Christian. From that and some other emails sent along those same lines, we decided maybe we should take that advice and find somewhere else to go.”

Jarvis said he and his wife, Jamie, made the gut-wrenching decision to leave Ada City Schools — and the baseball program — Thursday evening.

“My wife’s comment to me last night was, ‘We just left a school we were really happy with in Victory Christian and when we left, the parents were hugging us and crying and not wanting us to leave. Then we come here and people are posting letters telling us to get out of town after a good season,’” Jarvis said. “We don’t need to put up with that. It’s just the best thing for our family at this point to move on and go somewhere where the community supports us and wants us here.”

Jarvis said he and his coaching staff had problems with parents at different times this spring, and the letters were not an isolated incident.

“(Finding the notes) wasn’t a surprise. It was kind of the icing on the cake,” he said. “We had some issues all throughout the season. Mostly playing-time things where parents don’t see reality. They’ve tried to go over my head to the administration and talk about us negatively as a coaching staff. But I think our record proves we did something right. The administration never entertained anything that was said from those complaints.”

In fact, Jarvis said athletic director Bryan Harwell and the rest of the Ada administration have shown him nothing but support since his arrival last June.

“I want to make sure everyone knows the administration has been absolutely phenomenal. I’ve had no issues at all from them. They’ve all been 100 percent supportive. They’ve backed me through this stuff,” he said. “I want to make sure that it’s clear that in no way they are forcing me out. As a matter of fact, they’ve tried to get me to stay, to be honest.”

Harwell spoke highly of Jarvis and his efforts with the baseball program.

“The Ada City Schools Administration is very appreciative of the time, effort and results that coach Jarvis brought to the Ada High baseball program. He had a positive impact on our athletes, our baseball program and our entire athletic program. We wish he and his family the very best,” Harwell said in a statement.

Jarvis said one of the most hurtful things about the entire situation was bringing his children into the situation.

“It’s sad that these are parents. If they would just stay out of it, it would be much better for everybody. Me as a coach, I can handle it. I don’t think it’s justified or warranted, but I can handle it,” he said. “But to attack my kids is crossing a line. They’re no different than their kids. They’re still kids. To attack them by name is just not right, just plain and simple.”

Jarvis said just one parent approached him after the game and congratulated him on the team’s successful run to the regional tournament.

“That was an indicator to us that we weren’t really supported by the parents. I’m not going to lump them all together, because there were some good parents that did have our back and supported us. Unfortunately, there were several that wanted to use their voice in a negative way and did some things, in my opinion, that are kind of crossing the line,” Jarvis said.

Jarvis said his players made great strides since those first workouts last summer.

Jarvis used freshman Zac Carroll as a prime example of Ada’s improvement throughout the course of the spring.

“When he pitched against Byng (in Ada’s fifth game of the season), the moment was a little too big for him and he struggled. Fast forward to the regional tournament, and he starts Game 1 and that was the biggest stage he’s ever pitched on, and he threw lights out. He looked like a senior out there with his poise and the way he controlled himself,” he said.

Many onlookers thought it might take a while for Jarvis and the team to turn things around. That certainly wasn’t the case.

“I don’t think many people thought we would be in that position at the end. I knew that we had the pieces there and that was possible,” Jarvis said.

“I knew it would take a complete buy-in by them and a complete culture change and expectation change if we were going to get there. They were so accustomed to not winning and almost being OK with it, and we had to flush that thinking before anything was going to happen. That was the big question mark — how quickly could we flush that negative mentality that they had,” he explained.

The Cougars would end up winning nine of their 12 games heading to the regional tournament.

“I told them they could go and compete with anyone in the state, and they truly believed it. So when we went out there at the regional tournament, we had freshmen and sophomores who weren’t intimidated, and they fully expected to win games,” Jarvis said.

Jarvis believes a good foundation has been laid for the next coach of the Ada Cougars.

“The athletes were here. They needed structure and a little bit of guidance. But they put in the work, and they’re the ones who decided to make it a great season,” he continued. “It’s really on them. It was their year, and they did it. Again, I couldn’t be more proud of them.”