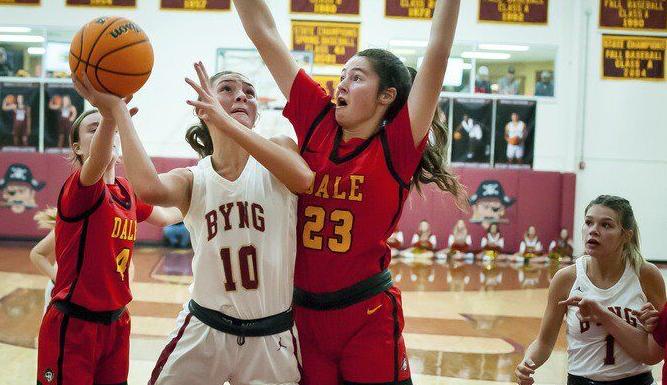 Byng junior Cadence Carlos (10) puts up a shot between Dale defenders Ava Bell (4) and Libby Johnson (24) during their Tuesday night matchup inside the Bill Koller Fieldhouse. Watching the action from behind is Byng junior Brylee Baird (1). 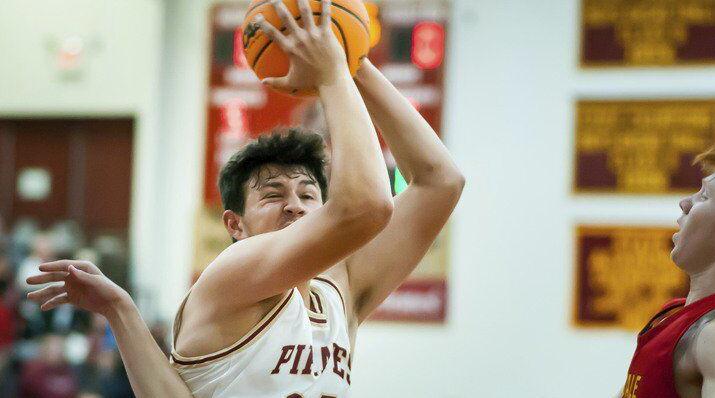 Byng junior Bo Boatwright (24) puts up a shot in the paint during a season-opening matchup with Dale Tuesday night inside the Bill Koller Fieldhouse.

Byng junior Cadence Carlos (10) puts up a shot between Dale defenders Ava Bell (4) and Libby Johnson (24) during their Tuesday night matchup inside the Bill Koller Fieldhouse. Watching the action from behind is Byng junior Brylee Baird (1).

Byng junior Bo Boatwright (24) puts up a shot in the paint during a season-opening matchup with Dale Tuesday night inside the Bill Koller Fieldhouse.

BYNG — The Dale Lady Pirates got a game-high 32 points from Brook Rutland and defeated the Byng Lady Pirates 62-31 Tuesday night inside the Bill Koller Fieldhouse.

It was a rough season-opener for the Lady Pirates against a talented Dale group. Dale is now 1-1 after dropping a 44-37 decision at Preston to open its 2022 campaign.

“We faced an extremely tough opponent to open the season and that is what you want for an opener. The final score looks pretty lopsided, but we competed really well,” said Byng head coach Luke Clark. “This will be a learning moment for our team because Dale plays a very unique style of basketball, especially at the defensive end. We’ll grow a lot from this experience and now we have two weeks off to hopefully go do so.”

Byng won’t return to action until Lone Grove comes to town on Nov. 29.

Dale led just 12-8 after the first quarter but had extended its lead to 31-21 by halftime. The Lady Pirates trailed by 12 after three periods before the visitors finished the game on a 13-5 run.

In the boys contest, Dale held off Byng 58-44. No information from that game was available at press time.

BYNG — The Byng High School boys basketball team jumped on Class 2A juggernaut Dale early but couldn’t hold off the talented Pirates at the end of a tough 58-54 loss Tuesday night inside the Bill Koller Fieldhouse.

Dale, the defending Class 2A state champs, improved to 2-0 on the year. It was the season-opener for the host Pirates.

“I was extremely proud of the team tonight. They played with phenomenal effort throughout the game and executed at a high level, especially on the defensive end,” said Byng head coach Zack Samaha.

“These are the types of games that you love as a player and a coach. Dale is one of the best teams in the state regardless of classification, and to lead the majority of the game and come up just short absolutely hurts, but it shows that we can compete with the best around.”

Byng led 15-9 after the first quarter and carried a 31-25 lead into the halftime locker room. Dale trimmed its deficit to 40-38 heading into the fourth period before completing the comeback with a 20-14 run to end the game.

Byng junior Malachi Schilreff exploded for a game-high 29 points to pace the host Pirates. He knocked down three 3-point baskets. Camby Poorbuffalo was next for the locals with seven points, including one triple.

“Our response to this game will be pivotal in how our season plays out. I am looking forward to another journey with a great group of ballplayers and kids,” Samaha said.

The Byng boys are back at home on Nov. 29, hosting Lone Grove.