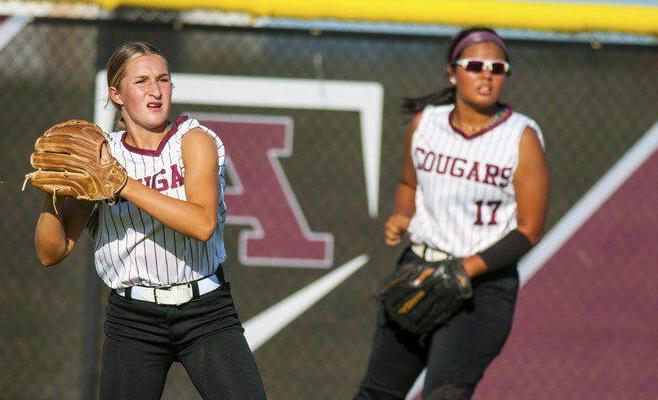 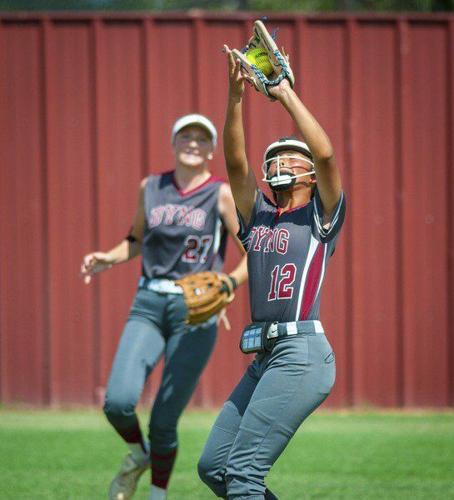 Byng freshman Hailey Alexander finished 3-for-3 in the Lady Pirates’ tough 6-1 loss to Tecumseh in a Monday night road game.

Byng freshman Hailey Alexander finished 3-for-3 in the Lady Pirates’ tough 6-1 loss to Tecumseh in a Monday night road game.

Tishomingo scored five runs in the top of the seventh inning to snap a 3-3 tie and turn back Ada 8-4 Monday at the Ada High Softball Complex.

Coach Jeremy Strong’s club now has back-to-back District 4A-2 contests. Ada was at Perkins-Tryon on Tuesday and host Classen SAS at noon today.

Ada trailed 3-2 heading into the bottom of the sixth inning. However, Trenity Duvall hit a one-out single and scored all the way from first on a double to left field by Karsyn Woods that tied the game at 3-3.

The Lady Indians followed an Ada error with four consecutive singles in their five-run volley in the seventh inning.

Ada got base hits by Abbey Strong, Bradi Odom and Jakobi Williams — who knocked in a run) in the bottom of the seventh but couldn’t finish a rally attempt.

Woods led a 10-hit Ada offense, going 2-for-3 with two doubles and two RBIs. Rylynn Truett went 2-for-4 with a double, an RBI and a run scored for Ada, while Williams also had two hits.

Keaton Slover was the winning pitcher for the Lady Indians. She struck out seven, walked one and allowed three earned runs in a solid complete-game outing. Woods absorbed the loss for Ada. She struck out one and walked one in seven innings.

TECUMSEH — The Byng Lady Pirates scored a run in the top of the first inning but didn’t find a way to score again in a 6-1 district road loss to Tecumseh Monday evening.

Alona Cooper-Rochovitz got Byng started by leading off the game with a double. Hailey Alexander followed with a run-scoring single to right field and just like that, the Lady Pirates quickly grabbed a 1-0 lead.

Alexander stole second, but after Tecumseh ace Serenity Jacoway struck the next two batters out, the Byng runner was thrown out trying to steal third to end the inning.

Jacoway was pretty much in control after that, shutting out Byng over the final six innings. She finished with seven strikeouts, one walk and allowed just the lone run in the complete-game outing.

With the game tied at 1-1, Cooper-Rochovitz ripped a one-out double to right field in the top of the third inning. Alexander followed with an infield single, putting runners at the corners.

McKenzie Alford then bunted the ball down the first base line but Cooper-Rochivitz was unable to score on the play, leaving runners at second and third with two outs. Jacoway got out of that jam by forcing a pop-up to first base.

Alexander finished 3-for-3 to lead a seven-hit Byng offense. Torri Gustin went 2-for-2 with a walk for visitors.

Zariyah Masquas finished 2-for-2 with a double, a walk and a run scored in Tecumseh’s 11-hit offense. Katie Overstreet went 2-for-3 and scored twice for the hosts, while Vivian Hayes and Jessi Hull also had two hits each.

The Lady Pirates are at the Madill Festival on Thursday. Byng meets host Madill at 4:30 p.m. and will face Ardmore at 6 p.m.