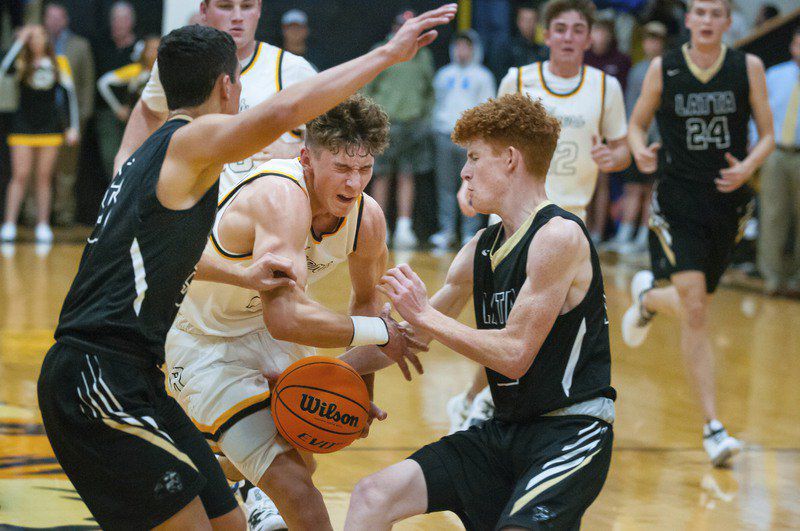 Roff’s Trayson Miller (20) is the victim of a double team by Latta players Bryce Ireland, left, and Lane Garrett during a boys basketball contest Tuesday night in Roff. 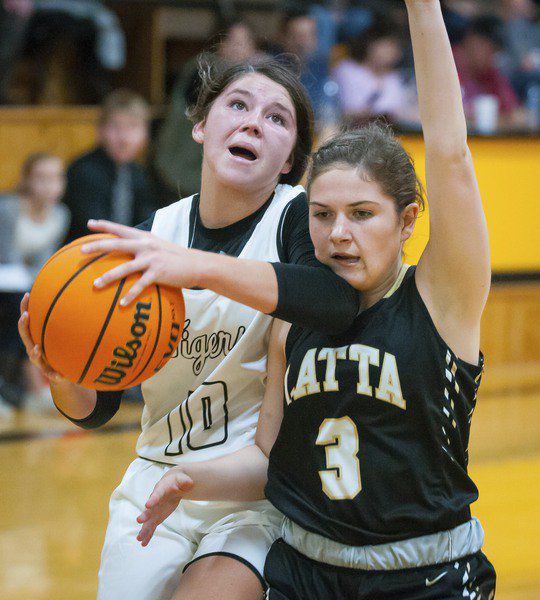 Roff’s Payton Owens (10) drives to the basket against Latta’s Alehsa Traylor during their contest Tuesday night inside the Roff gymnasium.

Roff’s Trayson Miller (20) is the victim of a double team by Latta players Bryce Ireland, left, and Lane Garrett during a boys basketball contest Tuesday night in Roff.

Roff’s Payton Owens (10) drives to the basket against Latta’s Alehsa Traylor during their contest Tuesday night inside the Roff gymnasium.

The Roff Tigers got hot early in the third quarter and turned back Latta 65-54 before a packed house in the Roff gymnasium Tuesday night.

Roff improved to 3-1 on the season. It was the opener for Latta.

“I was proud of our guys. Any time at Roff if we can beat Latta, that’s a big win,” said Roff head coach Larry Johnston.

In the girls game, the Lady Panthers overpowered Roff 64-24. The Lady Tigers fell to 1-3, while Latta starts off at 1-0.

Roff hosts Calvin on Friday. Latta is off until a Nov. 19 home date against Dale.

The Panthers led 28-25 at halftime, and Ethan Elliott opened the third period by draining a 3-pointer to put the visitors on top by six.

“It was huge. I thought, even going back to the second quarter ... we had Trayson and Wil on the bench the whole time, and our guys got it to within a one-possession game (by halftime). I thought that was a key too,” Johnston said.

“We made some tiny adjustments at halftime and our guys did a great job of taking good shots and we have a bunch of dudes that can score,” he continued.

Jairus Smith had a pair of 3-pointers during the RHS hot stretch and Wil Joplin also connected from long range. Trayson Miller scored on back-to-back drives down the lane for the other four Roff points in the run.

“It was the difference in the game. We talk about coming out and having a good start to the third quarter and we didn’t do that. But it was our first game and Roff’s fourth game. I think we’ll be all right,” Kilby said.

The Panthers got within seven on a pull-up jumper by Elliott early in the fourth quarter but could get no closer.

Latta put together an impressive volley of its own in the first quarter. After Roff scored the first six points of the game — and had chances to start off even stronger but couldn’t get shots to fall early — Latta responded with a 13-0 run that put the visitors ahead 13-6.

“Our guys did a good job of defending. Latta’s hard to guard,” Johnston said. “Latta has a lot of guys that can dribble and shoot. They almost always have four guys that can hit a three out there if not five.”

Miller and Smith led a balanced Roff attack with 15 points each, while Benedict added 13 and Joplin contributed 10.

The Lady Panthers carried a 34-11 lead into halftime.

Carson Dean was the only Latta player to reach double figures with 13 points to go with five rebounds and a steal. However, Latta saw 11 different players reach the scoring column.

Alesha Traylor and Jaylee Willis both scored eight points off the bench for Latta. Traylor sank a 3-pointer and was 3-of-4 from the free-throw line and Willis connected on two 3-point tries.

Triniti Cotanny scored six points, all in the first half, and grabbed a team-best eight rebounds. Taryn Batterton added four points and six rebounds off the bench and Abbi Atkinson hit a pair of 3-pointers for the Lady Panthers as a reserve.

Freshman Breana Britt scored 11 points — all from the charity stripe — to pace the Lady Tigers. She hit 11-of-14 free shots and also had five rebounds. Payton Owens added eight points for Roff, while Sidney Wright pulled down six rebounds.