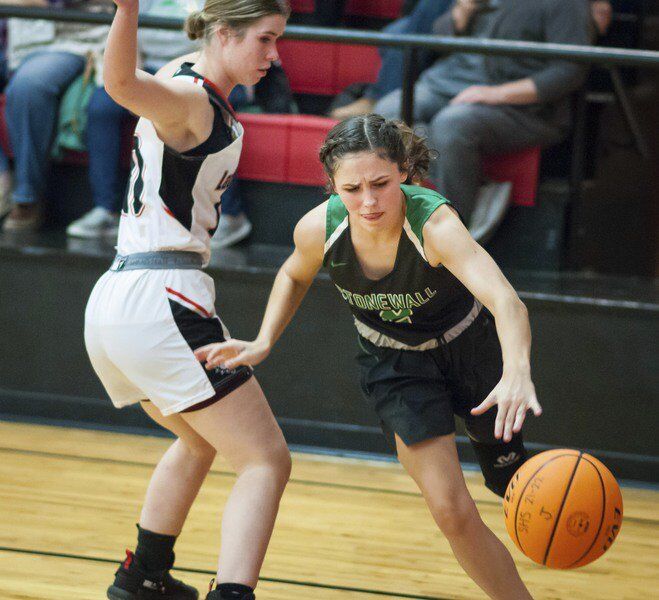 Stonewall sophomore Faith Ross scored 13 points in her team’s 57-38 loss to Class B No. 3 Pittsburg in a Tuesday night home game. 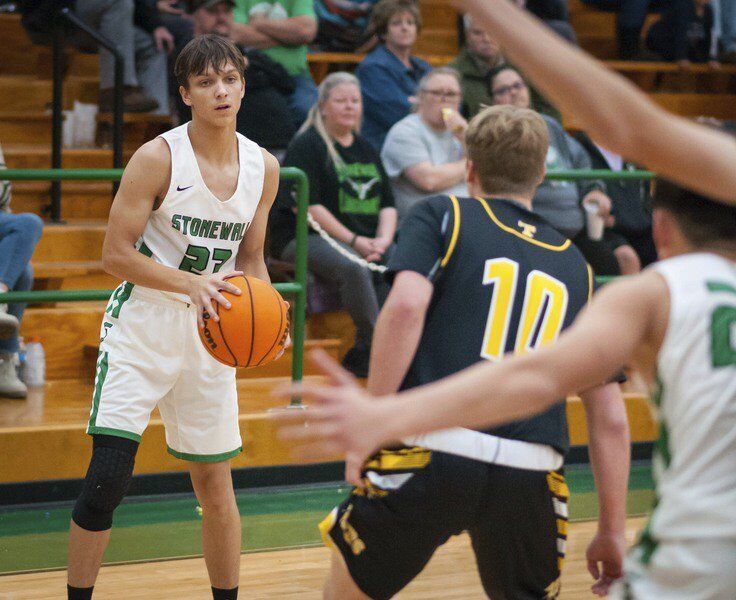 Stonewall junior Caleb Gibson (23) hit his team’s only 3-point basket during a matchup with Class B No. 3 Pittsburgh Tuesday night inside the Murphy-Roberts Gymnasium.

Stonewall sophomore Faith Ross scored 13 points in her team’s 57-38 loss to Class B No. 3 Pittsburg in a Tuesday night home game.

Stonewall junior Caleb Gibson (23) hit his team’s only 3-point basket during a matchup with Class B No. 3 Pittsburgh Tuesday night inside the Murphy-Roberts Gymnasium.

STONEWALL — The Stonewall girls basketball team went toe-to-toe with high-powered Pittsburg in the first half of their matchup Tuesday inside the Murphy-Roberts Gymnasium.

The Lady Longhorns led 11-10 after the first period before the Lady Panthers used an 11-7 run to grab a slim 21-18 lead at halftime.

But Pittsburg picked up the pace in the second half and eventually pulled away for a 57-38 win.

The boys contest almost followed the same recipe as the Longhorns hung tough early before Pittsburg sped past host Stonewall 52-28.

The Lady Panthers, under the direction of former Coalgate head coach Jim Jenson, stayed unbeaten at 15-0 on the year, while Stonewall slipped to 8-9.

“This was the best defense we have played for a half this season,” said SHS head coach Jeff Parnell. “And we shot it well in the first half. I felt like we got a little tired with only having seven girls and only playing five. But I’m proud of the effort we had on both ends of the ball. It was our gritty kids against a highly-ranked team.”

Pittsburg outscored the Lady Longhorns 20-12 in the third quarter to forge a 41-30 advantage before ending the contest with a 16-8 volley.

Caitlyn Graham got hot from the outside for Pittsburg, knocking down five 3-pointers on her way to a game-high 17 points. Tori Kilborn followed with 15 points and Trinity Wiseman hit a trio of triples and scored 11.

Due to COVID-19 protocols, the Stonewall teams are not scheduled to play again until Jan. 18 at Coalgate.

The Longhorns trailed just 11-7 after the first quarter and had clawed to within 22-20 by halftime.

However, coach Wes Mooreland’s team could muster just eight total points in the second half and were victim to a 17-2 Pittsburg run to end the game.

Garrett Wood led a balanced Pittsburg offense with 15 points, including five 3-pointers. Parker Horton was next with 12 points. Cole Allen and Matthew Rice each hit double figures with 10 points apiece.