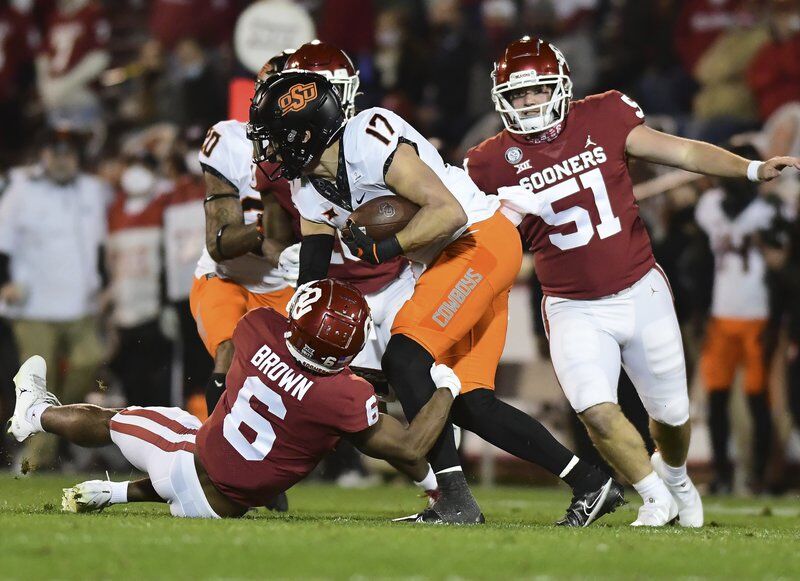 OU's Tre Brown pulls down OSU's Dillon Stoner as he runs with the ball during the Bedlam, Saturday, Nov. 21, 2020, at Oklahoma Memorial Stadium. 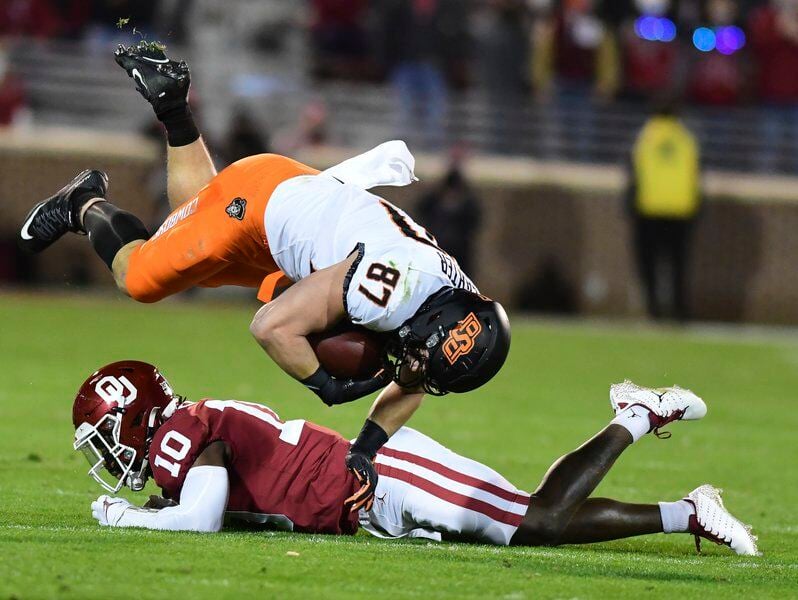 OU's Pat Fields tackles OSU's Logan Carter as he runs with the ball during the Bedlam, Saturday, Nov. 21, 2020, at Oklahoma Memorial Stadium. 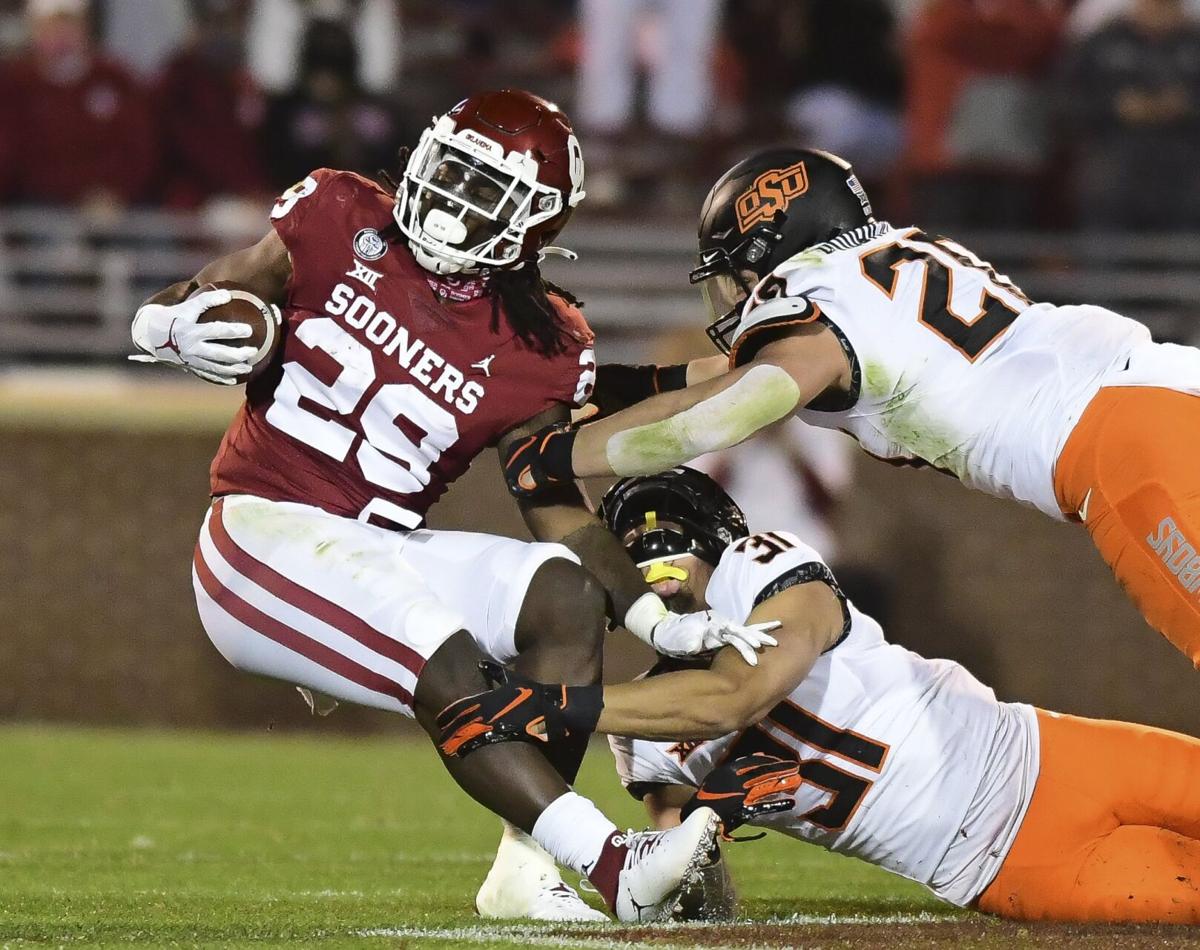 OU's Rhamondre Stevenson runs with the ball during the Bedlam, Saturday, Nov. 21, 2020, at Oklahoma Memorial Stadium. 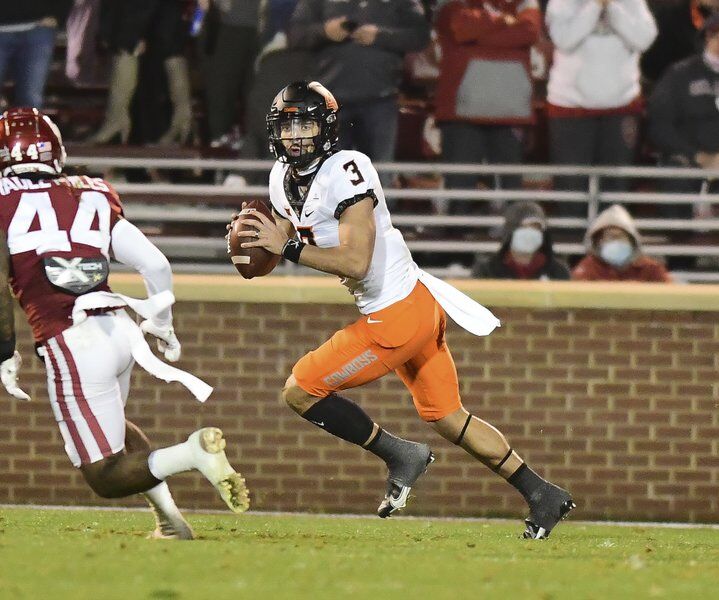 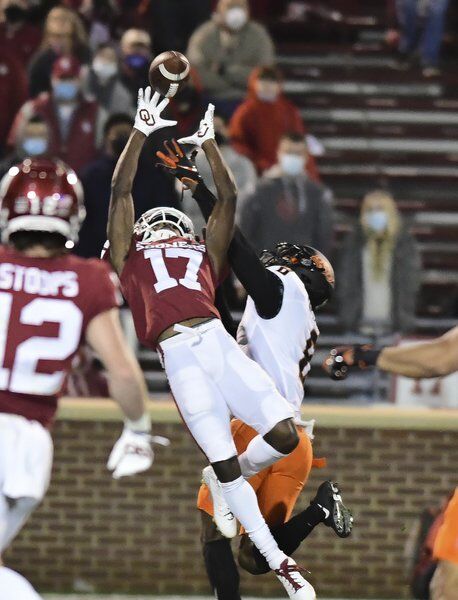 OU's Marvin Mims pulls in a pass during the Bedlam, Saturday, Nov. 21, 2020, at Oklahoma Memorial Stadium.

OU's Tre Brown pulls down OSU's Dillon Stoner as he runs with the ball during the Bedlam, Saturday, Nov. 21, 2020, at Oklahoma Memorial Stadium.

OU's Pat Fields tackles OSU's Logan Carter as he runs with the ball during the Bedlam, Saturday, Nov. 21, 2020, at Oklahoma Memorial Stadium.

OU's Rhamondre Stevenson runs with the ball during the Bedlam, Saturday, Nov. 21, 2020, at Oklahoma Memorial Stadium.

OU's Marvin Mims pulls in a pass during the Bedlam, Saturday, Nov. 21, 2020, at Oklahoma Memorial Stadium.

Imagine what the final score might have been had the Sooners not taken the second and third quarters off.

Imagine what the final score might have been had the Sooners been able to run for more than 1.8 yards per carry the length of the first half.

It was pretty good.

But it was pretty good.

The offensive wizard that is Sooner coach Lincoln Riley simply found soft spots in the Poke defense that didn’t require OU to run the ball.

The Sooners’ second offensive snap — the one after Rhamondre Stevenson went nowhere after being handed the ball — Spencer Rattler tossed a screen to Stevenson in the right flat, after which he galloped for 45 yards.

That led to OU’s first touchdown.

The Sooners' second score was a 20-yard toss to fullback Mikey Henderson.

Leave it to Riley to find ways for his backs to run roughshod over a defense even when they’re not “running” anywhere.

The Sooner coach tried building up his team’s Bedlam rival in the week leading up to the game, suggesting he might need extra defenders on the field to keep up with playmakers the likes of quarterback Spencer Sanders, receiver Tylan Wallace and running back Chuba Hubbard.

Yet, Hubbard managed the grand sums of eight carries and 44 yards, seven of them for 15 and one for 29; Sanders played but half the game after getting his bell rung when slung to the turf by Ronnie Perkins, a rag-doll sack if there ever was one, and his back-up, Shane Illingworth, completed just 5 of 21 throws before Sanders oddly returned; Wallace, meanwhile, was pretty good, making four catches and gaining 68 yards.

Of course, one one pretty good playmaker isn’t going to beat this Sooner defense.

Do you realize, over the last four games, OU’s defense has allowed eight touchdowns total, which is actually quite good, yet just four through the first three quarters of those four games, a figure that, were it constant and repeated, the Sooners, given their offense, would simply never lose?

While Poke coach Mike Gundy, when the camera found him, did not appear lost in his own world the way he was so many years ago at Troy, the contest that led to him giving up coordinator duties, there was a moment he appeared similarly helpless and hapless.

OSU trailed by 21 points facing fourth-and-8 from the OU 39-yard-line with about 12 minutes remaining.

Can you imagine living and dying with OSU football and watching your coach make a non-competitive decision like that?

In the past, Gundy has proclaimed Twitter to be a platform populated by “people that are sitting at home drawing an unemployment check” and the greater ease with which athletes may now transfer schools akin to “liberalism,” telling people “I can do what I want and I don’t really have to be tough and fight through it.”

Given the offense he’s taken at those he perceives to not be trying, down 21 points with almost an entire quarter to play, you might have though he would have, you know, tried.

The punt was downed at the 1 and nine plays and 99 yards later, Theo Wease was in the end zone catching Rattler’s fourth touchdown pass of the game, forging the final score.

Really, everything worked out as it was supposed to.

OU’s been playing like one of the best team’s in the nation and did so again and remains the master of its own destiny, at least where the Big 12 championship is concerned.

You can see something else brewing, too, something perhaps not as positive.

By the end of this season it may be abundantly clear OU’s one of the nation’s best four teams, yet losses that occurred before the Sooners became one of them are bound to crush their opportunity to prove they might be even better than one of the best four.

OU can only do what it can do and Saturday night, even taking bad penalties, running poorly early and removing its foot from the gas in the middle two quarters, it did plenty.

What was the final score again?

HOLDENVILLE [ndash] Sandra Lynn Carlin, 52, of Holdenville, Oklahoma passed away Sunday, Jan. 10, 2021, in Ada, Oklahoma. A funeral service will be held at 2 p.m., Thursday, Jan. 14, 2021, at the Estes-Phillips Funeral Home Chapel in Ada. For up-to-date service information, please follow us …