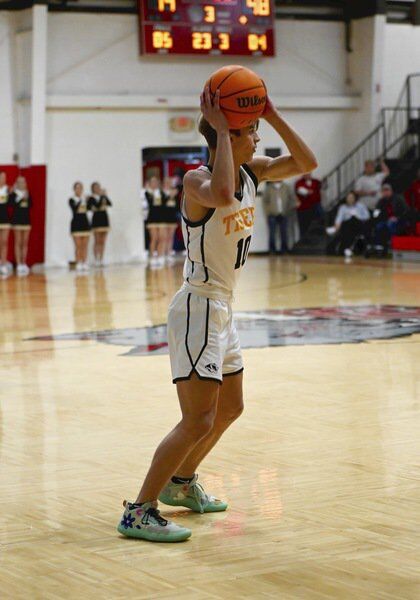 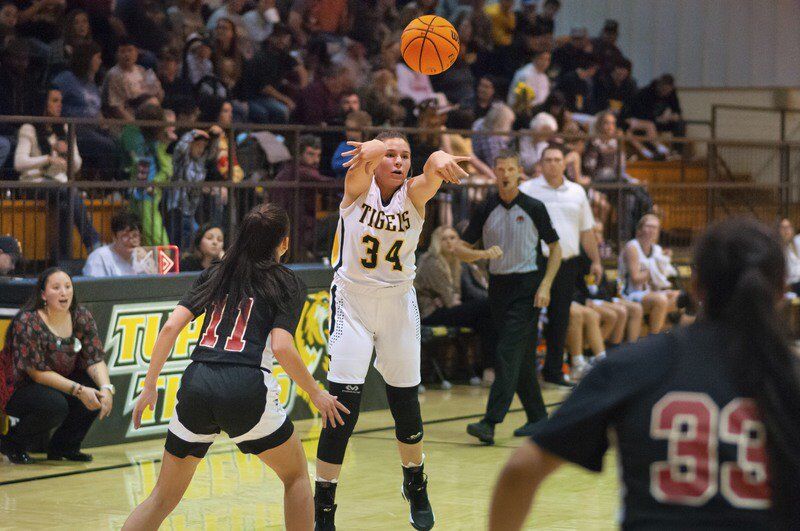 Ava Sliger (34) of Tupelo scored 10 points against Roff in a matchup of the local Pontotoc Conference foes at home Tuesday night. Roff won 54-40.

Ava Sliger (34) of Tupelo scored 10 points against Roff in a matchup of the local Pontotoc Conference foes at home Tuesday night. Roff won 54-40.

The visiting Tigers took control early and pounced on the host Tigers 66-36.

Coach Larry Johnston’s team ran its record to a perfect 14-0 mark heading into a Friday road trip to Stonewall, COVID-19 permitting. Tupelo dropped to 5-7 and is scheduled to be at Wapanucka Friday night.

In the girls opener, Roff took control in the middle two quarters and flew past Tupelo 54-40.

The visiting Lady Tigers made their way back to the .500 mark at 7-7, while Tupelo fell to

Senior Brighton Gregory led the RHS charge with 16 points and he was closely followed by Tallen Bagwell with 14. Dylan Reed scored 11 points for the RSH club, while Drew Sheppard also reached double figures with 10.

Tupelo got 14 points from Cody Airington and 13 more from Harley Davidson. Peyton Bills was next with six. Airington nailed three 3-pointers, while Davidson struck twice from beyond the arc.

Roff led just 11-7 after one quarter but used a 19-9 surge in the second to build a 30-16 halftime lead. The visitors stretched their advantage to 44-22 after three frames.

Tupelo junior Kylee Watson led all scorers with 22 points and Ava Sliger was next with 10. Sliger hit a pair of 3-pointers.