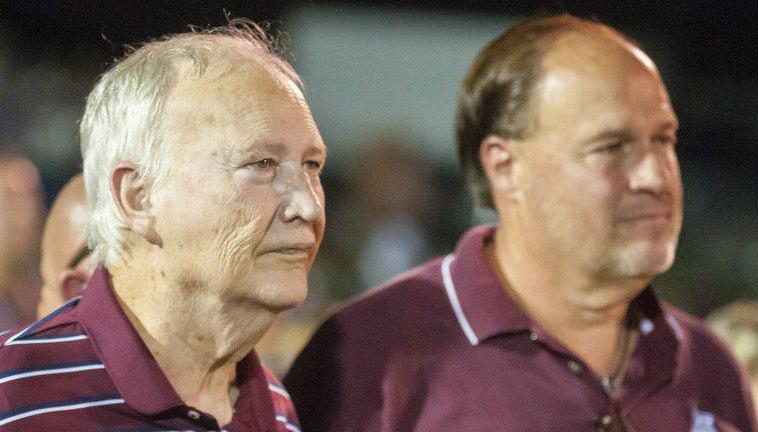 Veteran radio announcer Mick “Voice of the Cougars” Cowan stands beside longtime radio partner Russ Allen during Mick Cowan Appreciation Night at Norris Field earlier this fall. Cowan, who passed away Sunday, was the play-by-play broadcaster for Ada Cougar athletics from 1985 until he retired due to illness just before this football season. 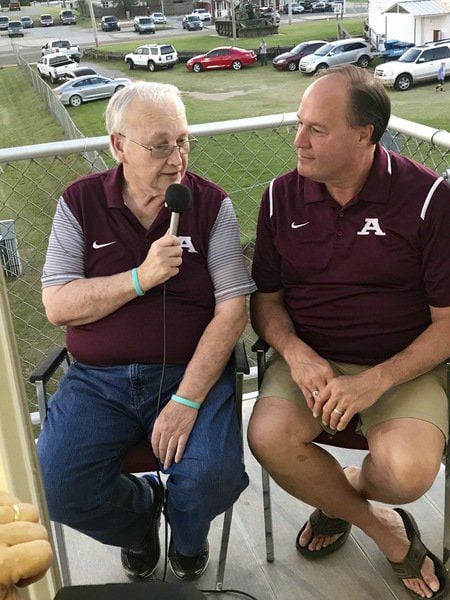 Mick Cowan and Russ Allen are shown during an Ada High football radio broadcast in this Ada News file photo.

Veteran radio announcer Mick “Voice of the Cougars” Cowan stands beside longtime radio partner Russ Allen during Mick Cowan Appreciation Night at Norris Field earlier this fall. Cowan, who passed away Sunday, was the play-by-play broadcaster for Ada Cougar athletics from 1985 until he retired due to illness just before this football season.

Mick Cowan and Russ Allen are shown during an Ada High football radio broadcast in this Ada News file photo.

I can’t imagine the number of times I’ve leaned on Mick Cowan to aid with my coverage of Ada High School athletics.

He came to my rescue numerous times with the perfect statistic to add to one of my stories or even provided columns for publication in The Ada News’ sports section. And he was always glad to lend a helping hand, especially if it meant giving an Ada Cougar athlete or team a little more recognition.

Cowan passed away Sunday at a Norman hospital. I, like many Cougar fans across the nation, wasn’t ready for that somber news.

I’ve enjoyed countless times sitting near him at press rows or press boxes all across the state, where he was doing his job like no one else could as the Voice of the Ada Cougars. I remember the first few times I had the chance to hear him while we were covering the same Ada High athletic event, and he blew my socks off with how impressive he was behind the mic every single time.

I sometimes struggle to keep stats at high school basketball games to this day, and he would do live broadcasts and never miss an assist or a rebound. It was such an amazing feat for him to do it and give his listeners play by play of the action at the same time. (Sometimes he’d even make time to criticize a referee or two.) I’m sure most of those ever tasked with keeping such statistics would agree how difficult it is.

Cowan would know everything about every player he covered on the court or field, too — their family tree, their per-game averages and probably their favorite foods.

Cowan was a walking Ada High School sports encyclopedia, too. I have no idea how he retained all the information, numbers, stats and records of Ada athletes through the years. Maybe being one of the best accounting professors in the state helped out. Because he certainly was that, too.

His passion and love for all things Ada athletics were unmatched. It’s a void that won’t ever be completely filled.

Cowan started calling Cougar sports on the air in 1985. He started as the PA announcer during baseball season that year, when Larry McBroom — who would become a legendary, state-championship-winning football coach at Ada — was the skipper of the Cougar diamond squad.

Cowan would quickly get the gig as the Voice of the Ada Cougars and was behind the mic ever since, until illness forced him to step down before this football season kicked off.

My sympathies go out to his wife, Vauda, the rest of his great family and everyone else who calls themselves an Ada Cougar.

Mick will be sorely missed.

Funeral services for Cowan are at 10 a.m. today inside the Cougar Activity Center. Interment will follow at Velma Cemetery.