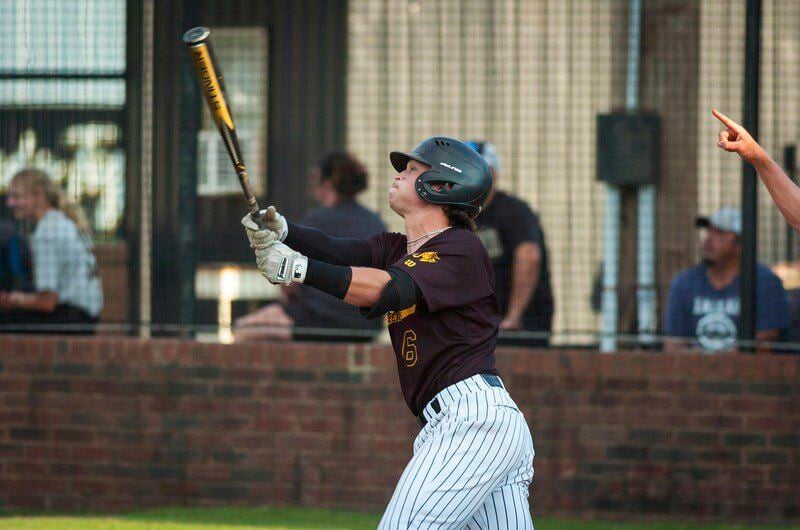 Latta junior Jackson Presley had the Panthers’ only two hits in an 8-0 loss to No. 2 Silo Thursday at the Silo Tournament. 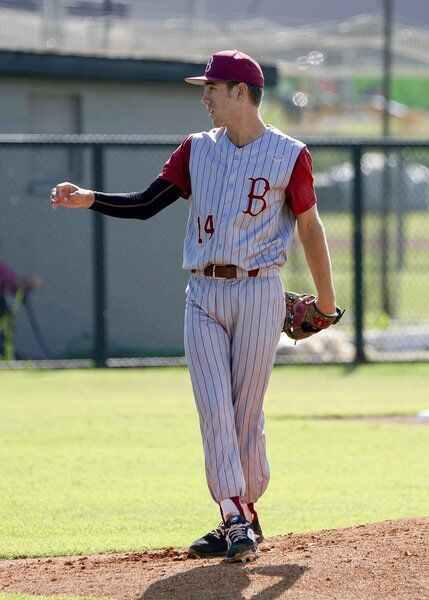 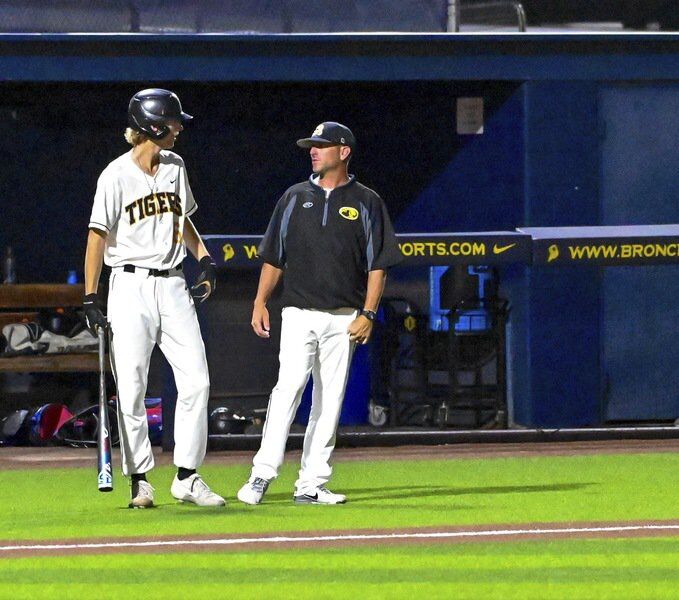 Roff’s Tallen Bagwell has a visit with head coach Danny Baldridge during action earlier this season. Bagwell hit a grand slam in the Tigers’ 15-0 win over Bennington Thursday at the Calera Tournament.

Latta junior Jackson Presley had the Panthers’ only two hits in an 8-0 loss to No. 2 Silo Thursday at the Silo Tournament.

Roff’s Tallen Bagwell has a visit with head coach Danny Baldridge during action earlier this season. Bagwell hit a grand slam in the Tigers’ 15-0 win over Bennington Thursday at the Calera Tournament.

Palmer struck out six, walked one and hit two batters in the five-inning gem.

Cooper McCage led Byng at the plate, going 2-for-3 with a walk and two runs scored. Mason Carter also went 2-for-3, drove in a run and scored a run, while Bo Boatwright notched the other Byng hit. Caden Azlin ended up with a walk, an RBI and scored two times.

No. 2 Silo shuts down Latta

SILO — The high-powered Silo Rebels stayed unbeaten with an 8-0 win over Latta Thursday night at the Silo Tournament.

Silo ace Delton Roberts overwhelmed Latta from the mound. He struck out 13, walked eight and allowed just two hits in five shutout innings. Charlie Gardner tossed the final frame and struck out three of the four batters he faced.

Easton Ford went 1-for-2 with two walks, an RBI and three runs scored, while Josh Trout finished 1-for-2 with a walk and two RBIs.

Both of Latta’s hits came from junior Jackson Presley.

SILO — Wright City scored two runs in the top of the seventh inning to get some breathing room and held off Tupelo 6-4 Thursday in the first round of the Silo Tournament.

The Tigers trailed 3-0 before scoring three runs in the bottom of the fifth inning to tie the game.

Tupelo got an RBI single by Brody McCollum with two outs in the bottom of the seventh inning and that brought the tying run to the plate, but the rally fell short.

Tupelo collected six hits — all singles — in the contest. McCollum drove in two runs, while Harley Davidson had one RBI. Luke Foreman, David Weller, Dalton O’Dell and Cody Airington had Tupelo’s other hits.

CALERA — Class B No. 1 Roff scored all of its runs in the bottom of the first inning in a 15-0 win over Bennington Thursday in the first round of the Calera Tournament.

Roff piled up 12 hits in the big first inning. Tallen Bagwell blasted a grand slam and went 1-for-1 with a walk, four RBIs and a run scored. Cade Baldridge hit a pair of doubles in a 2-for-2 outing that included two RBIs and two runs scored. Brand Wilson finished 2-for-2 with an RBI, while Beau Joplin and Easton Riddle also went 2-for-2 and each scored a run. Riddle also drove in a run.

Bill McCarter and Dylan Reed both finished 1-for-1 with a walk, two RBIs and two runs scored, while Kagen Huneycutt also went 1-for-1 and scored twice.

Huneycutt tossed three shutout innings for the Tigers. he struck out four, walked none and allowed one Bennington base hit.