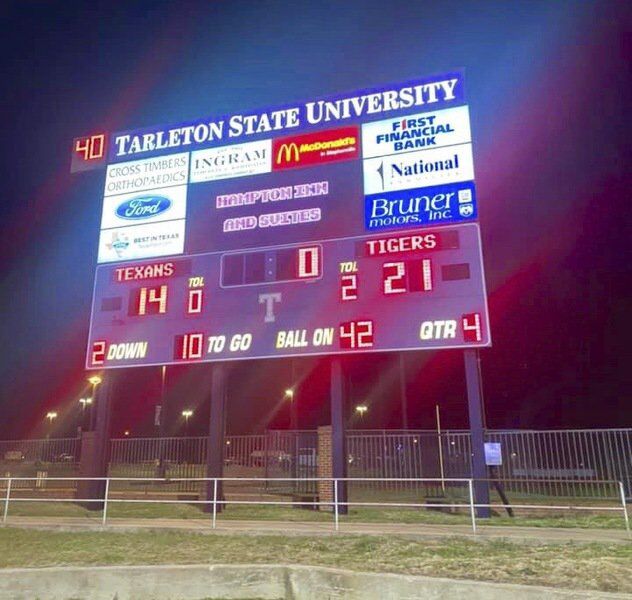 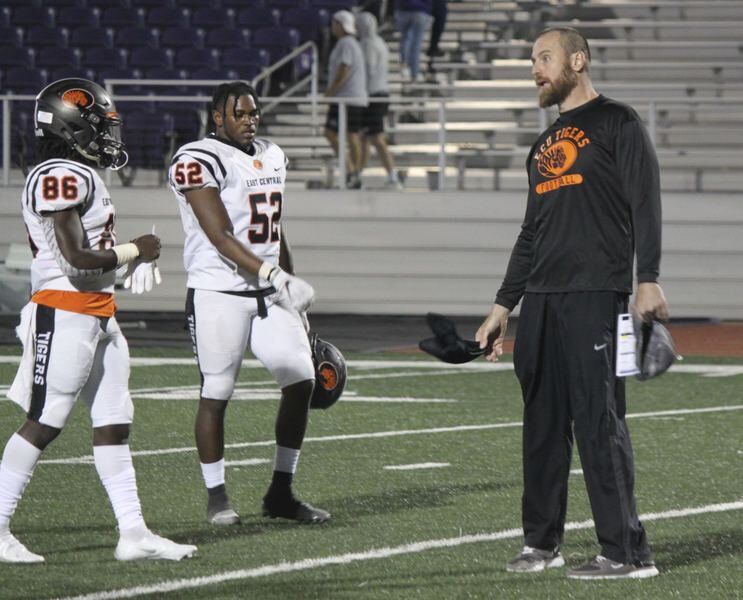 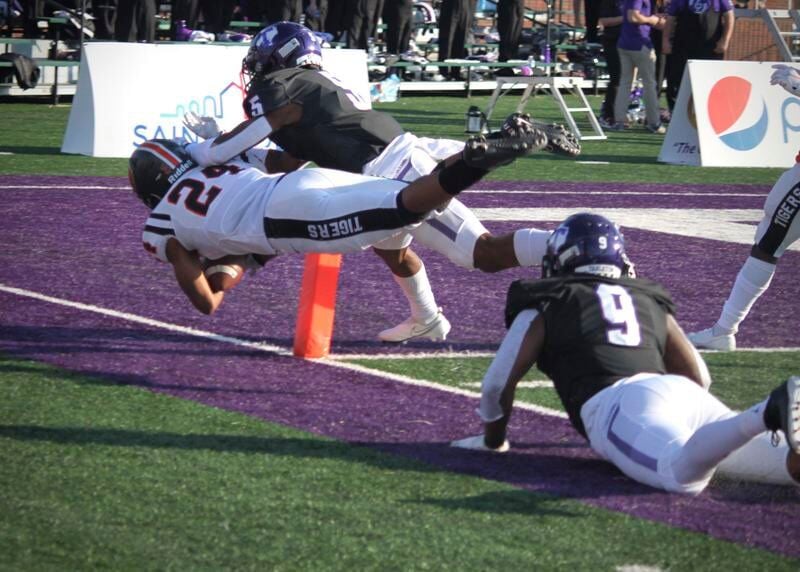 East Central running back Miles Davis, a sophomore from Lawton, dives for the end zone during the Tigers road matchup with Tarleton State Thursday night in Stephenville, Texas.

East Central running back Miles Davis, a sophomore from Lawton, dives for the end zone during the Tigers road matchup with Tarleton State Thursday night in Stephenville, Texas.

STEPHENVILLE, Texas – East Central sophomore Keonte Lusk came up with an interception near midfield with 13 seconds left in the game to seal the Tigers’ stunning 21-14 win over No. 21 Tarleton State 21-14 Thursday night at Memorial Stadium.

It was considered an exhibition game for the Tigers but they’ve now won both of their contests this spring. The Texans, who just became a Division I football school last July, finished its spring with a 5-3 mark. The Texans defeated Division I foes Dixie State (37-15) and FBS New Mexico State (43-17) earlier this spring.

“East Central came in here and they were certainly much more prepared. They really took it to us,” said Tarleton State head coach Todd Whitten following the game. “We really just got whipped.”

ECU head coach Al Johnson had a hint of things to come. He said the Tigers had been great in preparation leading up to Thursday’s contest.

“I am so proud of our players, they played a great game from start to finish,” he said. “They earned this victory by how they practiced leading up to Thursday’s game. We had two weeks of practice to prepare and at one point we had the best seven-day stretch since I have been at ECU.”

East Central’s defense was outstanding against the high-powered TSU offense, limiting the Texans to just 55 rushing yards, the team’s lowest output of the season.

Early, it looked like things mike go Tarleton State’s way when Benjie Franklin scooped up a blocked field goal attempt from ECU kicker Garrett Clark and returned it 68 yards for a touchdown. Christian Hernandez hit the PAT and the Texans led 7-0 at the 8:54 mark of the first period.

The Tigers answered with an impressive 13-play, 94-yard scoring drive that milked 6:13 off the clock. Sophomore running back Miles Davis got free for a 35-yard run before being tackled at the 1. He pounded it into the end zone on the next play and Clark’s knotted the score at 7-7 at the 2:41 mark of the opening period.

There was no more scoring in the first half.

The Texans drove to the ECU 6 yard line and couldn’t punch it in and the Tigers got another field goal attempt from Clark — this one from 34 yards out — blocked just before halftime.

Clark — a sophomore from Poteau High School — came up with a huge play to open the third period. He kicked off to Kaylon Horton of Tarleton State, who fumbled the ball. Clark recovered for the Tigers, setting up the offense at the TSU 36.

La’Quan Wells, a redshirt freshman wide receiver, rushed for 35 yards down to the 1 and ECU standout running back Ontario “Mookie” Douglas scored on the next play. Clark’s PAT was good, giving the Tigers a 14-7 lead with 14:21 remaining in the third period.

Later in the third, the Tigers put together another long scoring drive that covered 70 yards in 14 plays. Douglas chewed up 40 yards during the march and finally scored on a 2-yard TD run and another Clark PAT kick put the visitors on top 21-7 with 7:02 remaining in the period.

TSU quarterback Steven Duncan finally sparked the Texans’ offense with two big completions to receiver Tariq Bitson on his next possession. Bitson’s first catch was for 38 yards and later he hauled in a 26-yard TD catch that helped the home team slice ECU’s lead to 21-14 with 5:06 left in the third quarter.

There was no more scoring.

The Texans drove from their own 13 all the way down to the ECU 1 with just over eight minutes left in the fourth quarter but tight end Randy Clemons II dropped what looked like a sure touchdown pass on fourth down during East Central’s goal-line stand.

Minutes later, East Central had to dodge another red zone bullet. With 3:17 left, Lusk game up with his first big defensive play for the Tigers when he recovered a fumble in the end zone for a touchback.

“We had way too many errors. You can’t score one touchdown in college football and expect to beat anybody,” Whitten said. “We didn’t play very well and they certainly came in here and fired all their bullets. You have to give them credit.”

Douglas ended up with 105 yards rushing with the two TD runs. As a team, the Tigers piled up 218 yards on the ground.

“Their tailback is a really good player. I thought he was one of the differences in the game,” Whitten said.

Duncan finished the day with 276 passing yards with 139 of the yards going to Bitson, who hauled in six passes to lead TSU.

It was the first meeting between the two schools since Sept. 12, 2009, when they were Lone Star Conference foes. The Tigers now lead the overall series 13-10.

The Tigers will wrap up the 2021 spring season on April 10 when Lincoln University Blue Tigers — out of Jefferson City, Missouri, visit Norris Field. Kickoff is scheduled for 1 p.m.

“Our team has the potential to do great things when we practice and play our best,” Johnson said.

“We must continue to work. Enjoy the win, yes, but go back to work. I hope everyone will come out and watch us next Saturday for our first home game.”