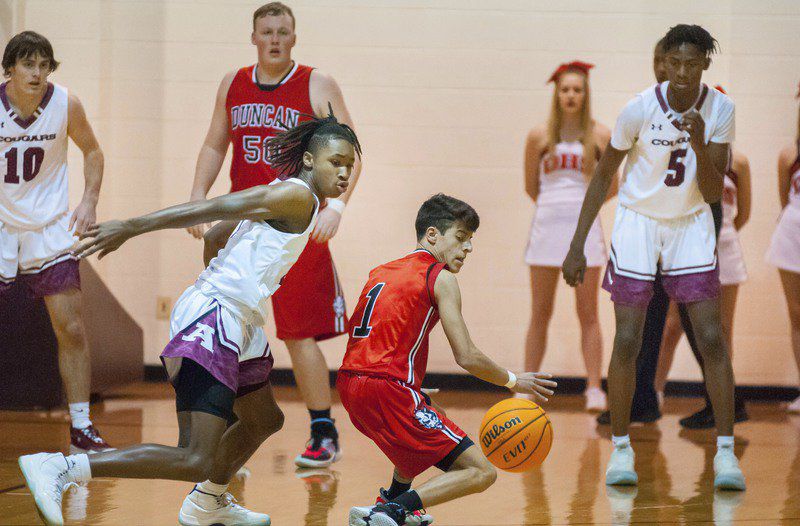 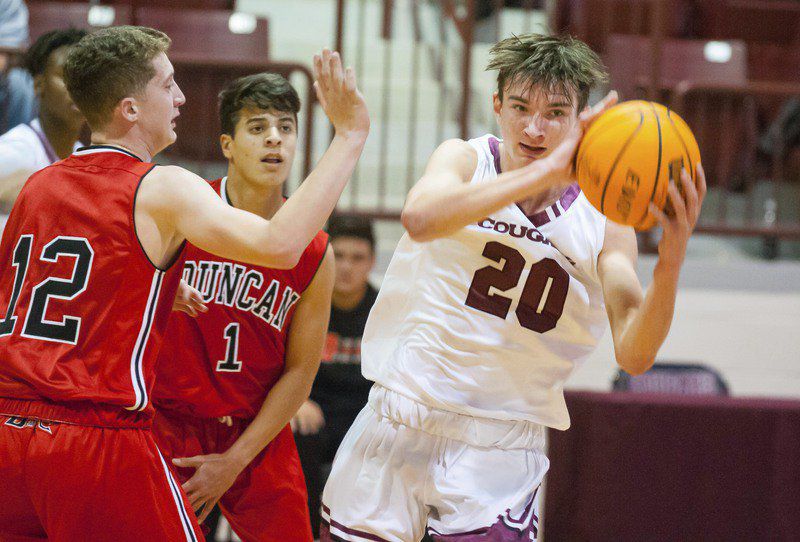 Ada’s David Johnson (20) is harassed by Duncan defenders Austin Pennypacker (12) and Nick Johnson during their matchup Tuesday night in the Cougars’ home-opener.

Ada’s David Johnson (20) is harassed by Duncan defenders Austin Pennypacker (12) and Nick Johnson during their matchup Tuesday night in the Cougars’ home-opener.

The Ada High School boys basketball team survived a 3-point shooting frenzy in the first half by Duncan twin brothers Ben Johnson and Nick Johnson and the Cougars made some big baskets of their own down the stretch to turn back the upset-minded Demons 54-48 Tuesday night in their home-opener.

The Cougars trailed by as many as nine in the second quarter and needed some clutch baskets in the fourth period to finally turn back the Demons.

“We were inconsistent executing. We struggled all night executing what we were trying to do,” said Ada head coach Garland Parks. “There were several times when we needed a basket we figured out what we needed to do and someone made a play. But I thought the opportunities were there all night. We just weren’t executing like we needed to.”

Ada led just 45-41 before Trey Havens buried back-to-back 3-pointer to put the Cougars up by 10 (51-41) and give his team some much-needed breathing room with just 1:33 to play. Havens finished with 13 points — 11 of those coming in the second half.

“It’s just about him maintaining confidence. He missed several early ... and I told him we were going to need him to make some shots because those shots are going to be there and he came through for us,” Parks said.

Nick Johnson converted a four-point play after being fouled on a 3-point shot and sank his fourth 3-pointer of the night with 42.3 seconds left to get Duncan within 52-48 but the Demons wouldn’t score again.

Duncan led 36-35 after a free throw by post player Preston Weaks at the 6:21 mark of the final period.

Ada sophomore Camryn Reed then sank a 3-pointer on Ada’s next trip down the court to put the Cougars on top for good at 38-36.

Jaxson Robinson, Ada’s junior playmaker, hit a triple and then outraced the Duncan defense for a two-handed slam that followed a Reed rebound and a nice outlet pass from Kaden Cooper that pushed the Cougars’ lead to 45-38 with just over four minutes left in the game. Robinson finished 7-of-8 from the field, hit a trio of 3-pointers had a pair of slams on the way to a team-high 18 points. He also had six rebounds and two steals.

Cooper added 11 points, including a two-handed jam of his own off a nice feed from Robinson to start the fourth quarter. Cooper also had five steals.

Reed contributed seven big points off the bench for Ada.

Ben Johnson put on a shooting clinic for the Demons in the first half. He buried six consecutive 3-pointers to start the game — including back-to-back triples in the second quarter that put the visitors on top 25-19 at the 5:48 mark. He finished with a game-high 22 points but missed the two 3-point tries he attempted in the second half thanks in part to a much stingier AHS defense.

Nick Johnson hit his first two 3-point attempts, finished with four and scored 15 points. The Johnson brothers finished a combined 10-of-18 from beyond the arc.

“We were kind of lackadaisical coming out. We weren’t up pressuring the basketball and not in the lanes where we needed to be. Those are areas we have to improve upon if we’re going to be successful,” Parks said. “That was our focus at halftime — to come out and make sure we were pressuring the basketball ... and contesting every shot. We were better at that in the second half.”

The Cougars are now off until Madill visits the Cougar Activity Center next Tuesday.