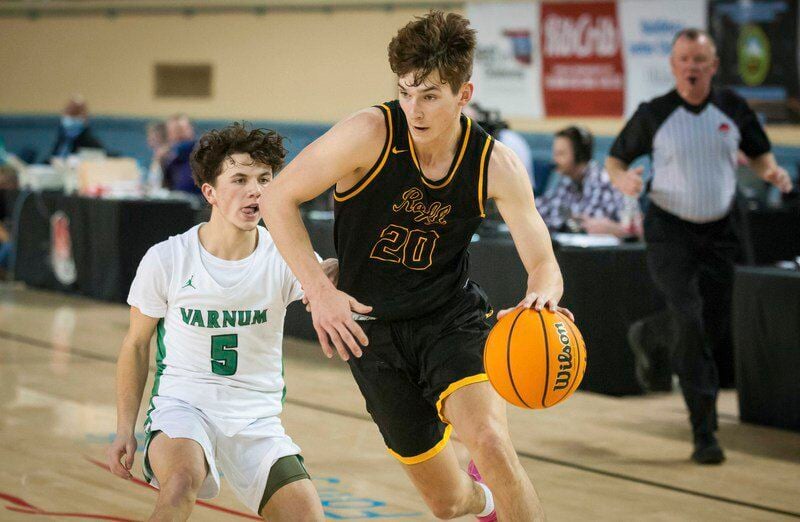 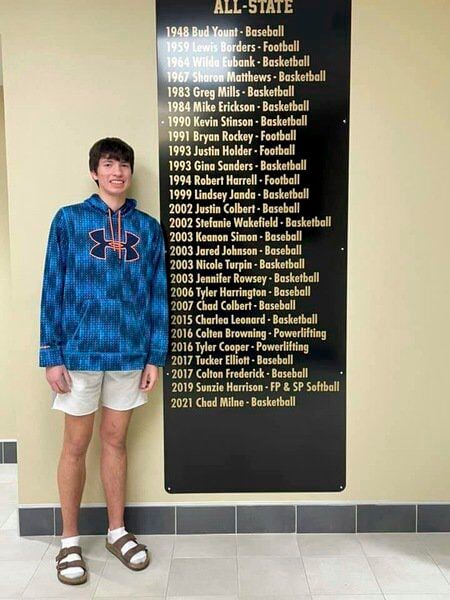 Allen All-Stater Chad Milne stands beside Allen’s full list of All-State athletes after his name was added to the bottom.

Allen All-Stater Chad Milne stands beside Allen’s full list of All-State athletes after his name was added to the bottom.

Trayson Miller of Roff and Chad Milne of Allen were both selected as part of the Small East team.

Miller averaged 14.5 points per game for a Roff team that advanced to the Class B State championship game before falling to No. 1 Varnum 61-56 in overtime. Thanks in part to Miller’s leadership, Roff finished the season with a 29-2 record.

“Trayson has had a great career and capped it off with a tremendous senior season. He worked hard to become a great playmaker, whether it meant scoring or creating for teammates,” said Roff head coach Larry Johnston. “Trayson played at a consistent high level all year long. Only 10 players from classes — B, A, 2A and 3A — make the All-State team, so it is a great honor to be selected.”

Milne did it all for an Allen basketball team that entered the playoffs unranked and was knocked out by a pair of losses to No. 10 Velma-Alma. The high-powered Comets edged Allen 41-39 in the Class A Area Tournament at Shawnee High School.

“It’s been a goal of his throughout his career to make All-State,” said Allen head coach Greg Mills. “I feel like he’s very deserving of the award. It’s a big honor. I think it speaks loudly of what other people think about him too.”

Milne averaged 22.2 points and 9.4 rebounds during his senior campaign. He is Allen’s first boys basketball All-Stater since Kevin Stinson won the honor in 1990.

Coaches for the Small East All-State team are Jon M. Hadley of Varnum and Jeff Fry of Braggs. Other All-State coaches include Roger Raper of Purcell and Matt Jones of Luther for the Small West, Brandon Maddux of Coweta and Todd Anderson of Collinsville for the Large East and Ryan Caldwell of Pauls Valley and Jeff Williamson of Woodward for the Large West.