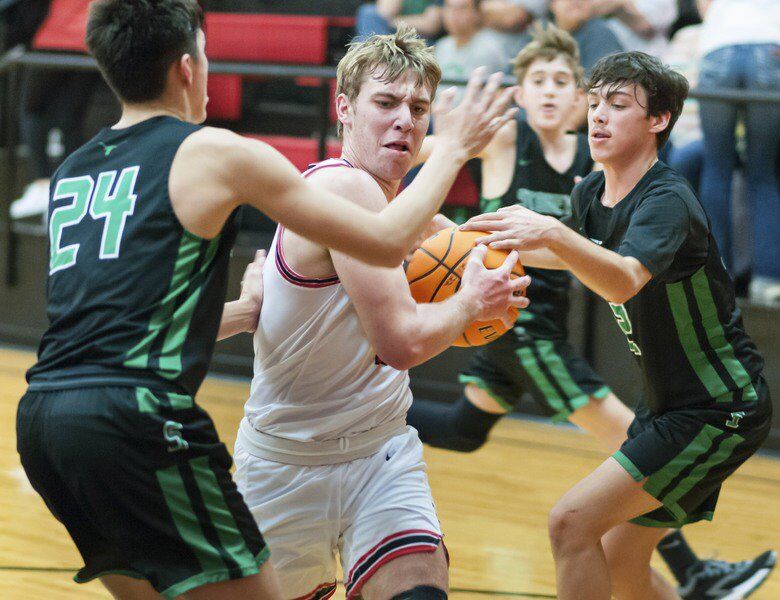 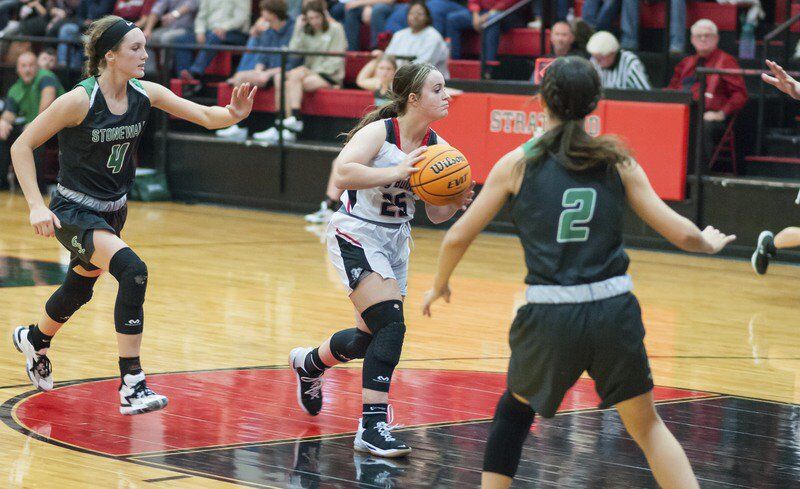 Stratford’s Lundyn Anderson and her Lady Bulldog teammates notched a 42-36 win over Dibble in a Tuesday night road game.

Stratford’s Lundyn Anderson and her Lady Bulldog teammates notched a 42-36 win over Dibble in a Tuesday night road game.

DIBBLE — Stratford junior Axel McKinney sank a 3-pointer at time expired to give the Bulldogs a thrilling 70-69 win over Dibble in overtime on the road Tuesday night.

Stratford inched above the .500 mark after the win, improving to 6-5 on the year, while the Demons dropped to 6-6.

In the girls game, Jaeden Getman looked to be back to her pre-injury ways, leading the Lady Bulldogs to a 42-36 victory.

Coach Mark Savage’s squad improved to 7-4, while Dibble fell to 6-6.

“Maybe it was not exactly the play we drew up, but a heads-up play to get the look,” Ardery said. “Tonight was one of those games you love to be a part of. Both teams played extremely hard. We had a lot of guys step up and play big minutes for us.”

Stratford looked like it was in control after building a 39-30 halftime lead and extending it to 56-46 after three quarters.

However, Stratford need a huge putback by junior Wanbli Whitehat with 12 seconds left to tie the game and had to make one last defensive stand to force overtime.

“We played really well, for the most part tonight, or at least the first three quarters. We lost our composure for a little stretch in the fourth, but we were able to battle back and find a way to send it to overtime.”

Walker Chandler led the way with 16 points, while both Canaan Weddle and Tucker Maxwell chipped in 13 points each. Chandler hit a pair of 3-pointers.

Getman finished with a double-double of 22 points and 10 rebounds for the Lady Bulldogs.

After a first-quarter tie, Stratford used a 14-8 second-quarter run to take a 25-19 halftime lead. Dibble trimmed the SHS advantage to 34-31 heading to the fourth period, but Stratford limited the Lady Demons to five points over the last eight minutes.

Kourtney Willingham hit a pair of big 3-pointers in the fourth quarter to help keep Dibble at bay. She finished with 13 points and four rebounds for the visitors.

No other SHS player scored more than three points.

Kaylei Clanton led the Dibble offense with 16 points, including four 3-point baskets. Meghan Faber was next with eight points.

Stratford finished 3-for-3 from the free-throw line - all by Getman — while Dibble sank 8-of-17 free shots.