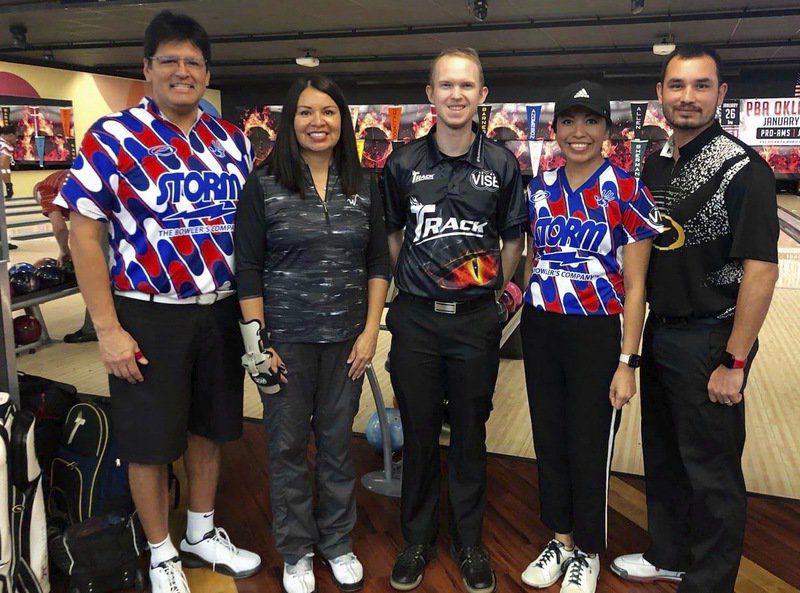 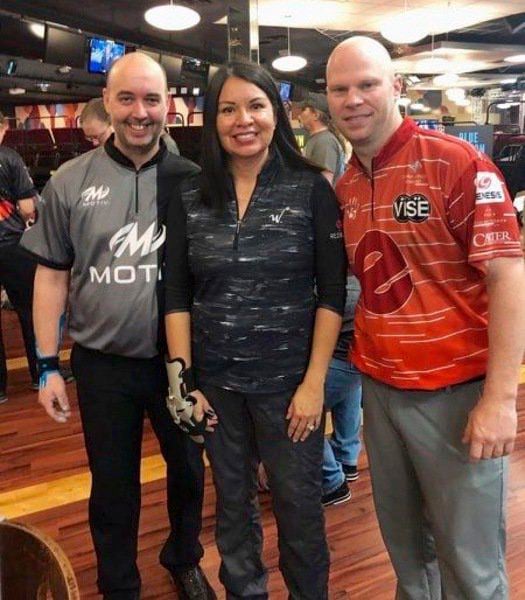 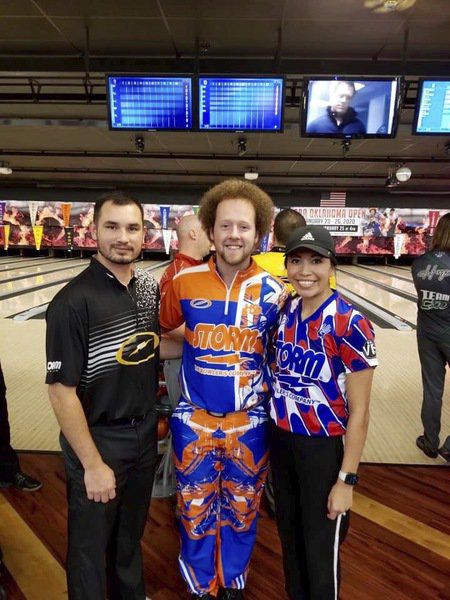 Local bowlers Bruce and Ashley Fish get a photo with PBA bowler Kyle Troup at a 9-Pin No Tap Pro-Am Tournament held last weekend at the Firelake Bowling Center in Shawnee.

Local bowlers Bruce and Ashley Fish get a photo with PBA bowler Kyle Troup at a 9-Pin No Tap Pro-Am Tournament held last weekend at the Firelake Bowling Center in Shawnee.

Lisa John, who bowls with Fish on the Native Strikers Monday Night Mixers team, said it wasn’t an option to her.

“I told him he could bowl the No Tap in OKC any month, but this was an opportunity of a lifetime to bowl with the pros,” she said.

It just so happened four slots were remaining, so Bruce, his wife, Ashley, and Lisa and her husband, Thomas, all bowled in the Oklahoma Open Pro-Am at Fire Lake Bowling Center in Shawnee.

John said it was an interesting format. A professional bowled the games with them as a fifth member of a five-person team. She noted the tournament was open to any amateur; one simply needed to pay the entry fee. Then she said they were assigned a different pro for each of the three games they bowled.

There were cash prizes for the top seven teams, and the youth that bowled received medals in lieu of cash. The local team was assigned the following pros: Dick Allen, Tommy Jones and Brian Robinson.

Bruce Fish admitted he is glad his team talked him into bowling in the Pro-Am.

“It was one of the best experiences I’ve had since I have been bowling for the past 10 years. I was able to bowl in a Pro-Am 9 Pin-No Tap Tournament with a few PBA bowlers,” he said. “I beat 2/3 of the professionals that bowled on my lane. I lost to newly inducted Hall of Famer Tommy Jones, but it was all for fun, so I’m not counting that or comparing myself to any of them.”

Ashley Fish also bowled well while hanging with the pros.

“Ashley had a good evening. She started the first game with a 5-7 split but picked that up and ended the day going home with a ball signed by pro Sean Rash,” Bruce Fish said. “But I’ll keep that for her, since Rash went on to win the Oklahoma Open Pro Tournament.”

I love reporting stories like this. I am very proud of these bowlers who represented LazerZone and Ada so well. Great job, fellow bowlers. You showed the professionals what Okies can do.

Finally, bowling friends, remember Valentine’s Day is just around the corner, but not before that rascally groundhog decides if we have six more weeks of winter! Good luck and great bowling to everyone this upcoming week.