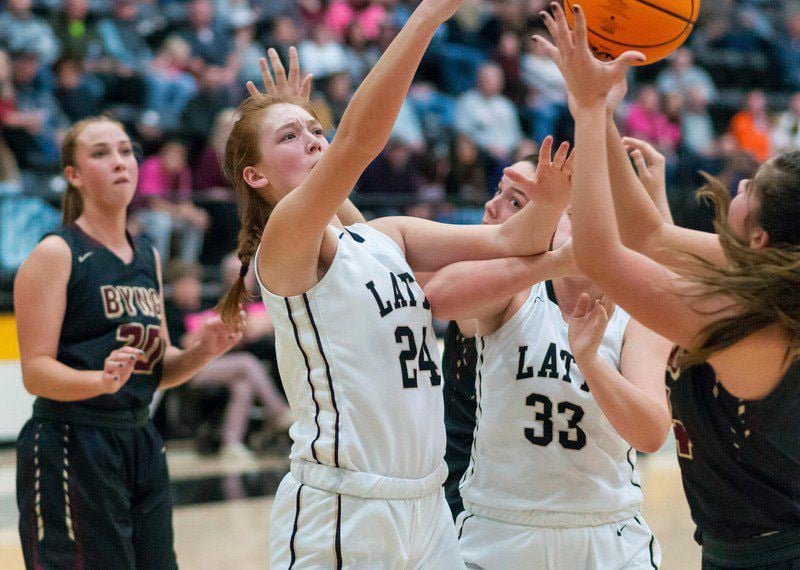 Trinity Cotanny (24) of Latta, Carson Dean (33) of Latta and Kennedy Large (24) of Byng all battle for a rebound during a matchup between the two local rivals Tuesday night in Latta. 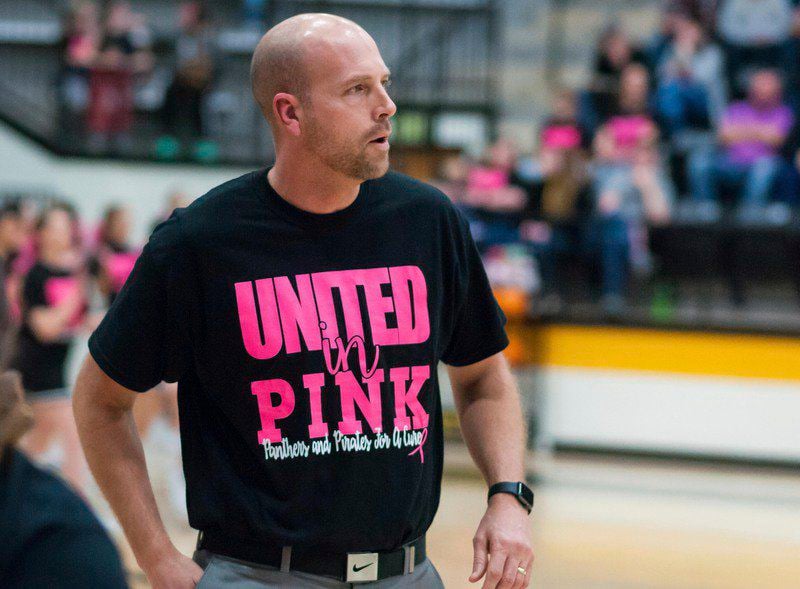 Byng girls coach Trent Miller watches from the sidelines during Pink Out Night against Latta Tuesday inside the Latta Panther Fieldhouse.

Trinity Cotanny (24) of Latta, Carson Dean (33) of Latta and Kennedy Large (24) of Byng all battle for a rebound during a matchup between the two local rivals Tuesday night in Latta.

Byng girls coach Trent Miller watches from the sidelines during Pink Out Night against Latta Tuesday inside the Latta Panther Fieldhouse.

Latta’s Carson Dean got into early foul trouble and was pretty quiet for the Lady Panthers through the first three quarters of their Pink Out matchup with local rival Byng Tuesday night inside the Latta Panther Fieldhouse.

Dean got loud in the fourth quarter.

The LHS junior scored all 10 of her points in the final period — including back-to-back 3-pointers — to help Latta finally shake free from Byng in a 36-29 victory.

The Lady Panthers, ranked No. 6 in Class 2A, have now won eight consecutive games to improve to 9-2 on the year, while the Lady Pirates dropped to 4-5.

“I told the kids this today. You can go all the way back to when coach (Carri) Storts played in that matchup and she’ll tell you war stories about Byng-Latta and it hasn’t changed. Thirty years has not changed anything. It’s just a battle every time you take the floor against each other,” said Latta head coach Bruce Plunk. “Trent’s (Byng coach Trent Miller) kids are prepared to play and they play hard. It was good to get the win.”

Byng senior Alexis Barnett opened the fourth quarter by draining a 3-pointer that got the Lady Pirates within 22-20.

Dean countered with back-to-back treys sandwiched around a basket by Byng’s Deesa Neely that gave Latta its biggest lead of the game (at that point) at 28-22 with 5:34 to play.

Dean’s basket inside with just over two minutes to go gave Latta another six-point lead at 30-24.

“Carson’s just a gamer. She was saddled early with foul trouble. We knew we were going to have to have her in the second half because she’s going to pull down rebounds and defend,” Plunk said. “Her 3-point shot is a work in progress. During the preseason when we had after-practice shooting, she spent a lot of time working on that shot and it’s paying off now.”

Single free throws by Chloe Brinlee and Tawni Wood — the latter with 47.8 seconds remaining that boosted the LSH advantage to 32-24 — helped put the game out of reach.

The game was tight from the start. Latta’s Triniti Cotanny hit a long jumper at the end of the first quarter to tie the game at 8-8 and Byng got two late free throws in the second quarter and a shot in the lane from Kennedy Large as time was running out to forge a 15-15 tie at halftime.

The two clubs combined to shoot 21.4% over the first two quarters. Byng finished 4-of-12 from the field while Latta went 6-of-26.

Byng went ice cold in the third quarter, finishing 0-for-8 and was limited to a pair of free throws by Carizma Nelson at the 2:37 mark to avoid the shutout. However, Latta led just 22-17 heading into the final frame.

“We have to keep improving. Hopefully, we’ll make a few more easy shots and take a little pressure off our defense. At halftime, we were poor offensively but held a team to 15 points. Our defense is still holding up and that’s who we are and who we’re going to be,” Plunk said. “I keep thinking one of these nights it’s going to all come together and we’re going to start rolling and it’s going to be a lot of fun to watch them play.”

No other Latta player reached double figures. The Lady Panthers got 12 points off the bench, including four from newcomer Caitlyn Bird who saw her first varsity action of the season for Latta.

Taryn Batterton and Hailey Baber both had eight rebounds apiece.

Britney Brooks-Teel was the only Byng player to hit double figures. She ended with 10 points, 11 rebounds and three blocked shots. Large, Byng’s other post player, had nine points and 13 rebounds.

Latta now heads to the 2020 Kingston New Years Classic where they’ll tangle with the host Lady Redskins (No. 18 in Class 3A) at 7 p.m. tonight in a first-round matchup. The tough field also includes Class 2A No. 2 Dale, Class 2A No. 3 Howe and Class 2A No. 4 Silo.

“You’re going to go down there with four of the top six teams in Class 2A. And we drew the host school, who is really good. We hope to fight through that. We would really like to get that first-day win and come back and get a shot at Dale in the semis,” Plunk said.

Meanwhile, the Lady Pirates will host the 7th Annual Byng Winter Classic and meet Douglass at 7 p.m. tonight in a first-round contest.