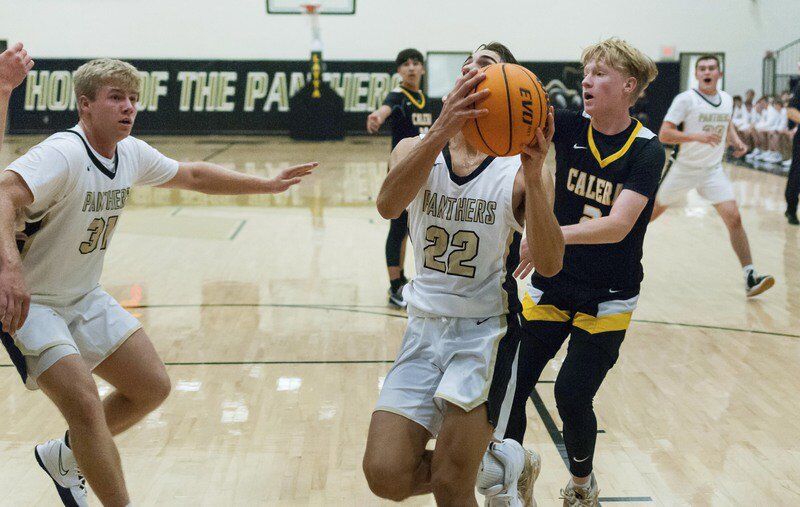 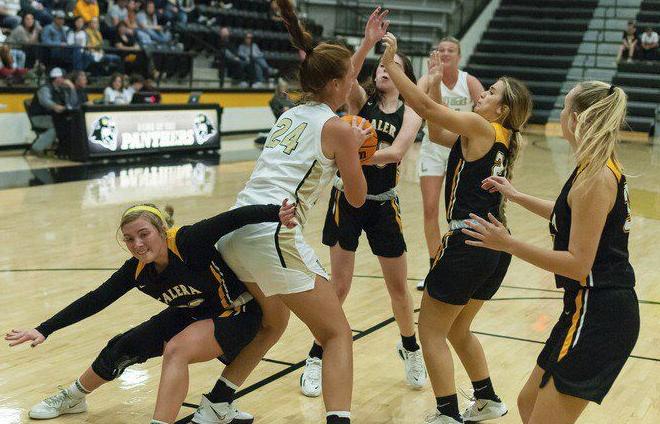 Latta senior Triniti Cotanny pulls down a rebound despite being surrounded by four Calera players during the Lady Panthers season-opener Tuesday inside the Latta Panther Field House. Cotanny had 11 points, 14 rebounds and three blocks in Latta’s 57-33 win.

Latta senior Triniti Cotanny pulls down a rebound despite being surrounded by four Calera players during the Lady Panthers season-opener Tuesday inside the Latta Panther Field House. Cotanny had 11 points, 14 rebounds and three blocks in Latta’s 57-33 win.

LATTA — The Latta High School girls basketball team scored the first 13 points of the game and never really looked back in a 57-33 win over a solid Calera club Tuesday night inside the Latta Panther Fieldhouse.

It was the season-opener for Latta, while Calera fell for the first time and left with a 3-1 mark.

In the boys game, Calera took advantage of a Latta second-quarter cold spell and eased past the Panthers 41-28.

Fellow post player Taryn Batterton also dominated the paint. She scored a game-high 17 points, including a 3-pointer, and had seven rebounds, two steals and a blocked shot.

“It was nice to finally get to play against somebody besides ourselves and see where we are,” said Latta head coach Bruce Plunk. “We needed our big girls to have somebody push them around and bang around on them and I thought they responded pretty well. But as you can see, there’s still a lot of work to be done.”

Latta led 18-3 after the first quarter before Calera — coached by veteran Vernon Johnson — began to finally settle in. The Lady Bulldogs got within 11 early in the second period before the Lady Panthers stretched their lead to 28-12 by halftime.

Latta buried Calera with a 21-7 run in the third quarter to carry a 49-19 lead into the final eight minutes.

The Lady Panthers now turn their focus to a tough road trip to Vanoss on Friday. Despite losing five starters that led the Lady Wolves to the Class A State championship game last year, Vanoss is off to a 4-0 start.

Plunk still believes the Vanoss girls will be a tough out despite losing five talented starters to graduation.

“Now we have a couple of days to get ready for a good Vanoss club. They’re very different, but I think they’ll be a lot better than most people expect. You don’t practice against one of the best teams in the state for three years and not be pretty good,” Plunk said.

Latta led 10-9 after the first quarter and after Konner Turner scored on a fast break with just over six minutes left in the second quarter, the game was tied at 12-12.

However, head coach Matt Bryant watched his team go scoreless over the final six minutes of the period and Calera took advantage. The Bulldogs outscored Latta 9-0 to end the period and take a 21-12 halftime lead.

The Panthers went 0-of-8 from the field with a couple of turnovers during the game-changing drought. It didn’t help that Latta finished 8-of-17 (47.1%) from the free-throw line during the contest. The Panthers also finished 1-of-15 from 3-point territory.

Calera playmaker Nakni Anna scored a game-high 16 points to go with five rebounds and two steals. Devin Brown hit 4-of-4 field goals and 4-of-4 free shots to finish with 12 points for the Bulldogs. He also had eight rebounds.