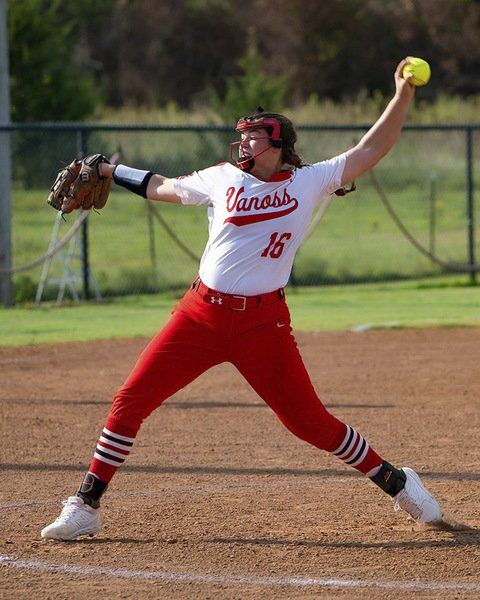 Riley Reed of Vanoss pitched four innings of scoreless relief for Vanoss against Lookeba-Sickles Saturday in the finals of the New Lima Tournament. She struck out four and walked none in the Lady Wolves’ 8-0 victory. Reed also finished 2-for-2 from the plate with a home run and two runs scored.

Riley Reed of Vanoss pitched four innings of scoreless relief for Vanoss against Lookeba-Sickles Saturday in the finals of the New Lima Tournament. She struck out four and walked none in the Lady Wolves’ 8-0 victory. Reed also finished 2-for-2 from the plate with a home run and two runs scored.

NEW LIMA – Riley Reed fired a one-hit shutout and launched a home run Saturday and the Vanoss Lady Wolves thumped Lookeba-Sickles 8-0 in five innings to capture the championship of the New Lima Tournament.

Vanoss, which improved to 17-4 on the season, made a perfect 5-0 run through the tournament. The Lady Wolves beat Asher, 7-1, earlier Saturday after defeating Stuart, 5-2, on Friday.

Lookeba-Sickles is now 14-6 after going 6-2 in tournament play.

“It was a great weekend for our team. The tournament provided a good environment with some really solid teams,” said Vanoss head coach Jonathon Hurt. “We had a lot of different kids step up in different situations. We will continue to get better the more experience we gain. This team has a high ceiling and I think people are starting to realize that.”

Reed, who entered the circle in relief, struck out four and allowed no walks through the final four innings while going 2-for-2 from the plate with one RBI, two runs scored and a walk.

Abbi Snow also helped out the Lady Wolves’ offense by going 2-for-3 with one RBI and scored once.

Emrie Ellis, who doubled, and Brinn Brassfield were each 1-for-3 and drove home two runs apiece. Jadyn Dalton (1-for-1) and Kara Carlson (1-for-2) each knocked in one run. Addison Dalton ended up 1-for-2 and scored a run.

Addison Dalton drove in four runs in a 2-for-2 outing from the plate, and Riley Reed tossed a one-hitter as the Lady Wolves clipped Asher in a three-inning contest.

Reed recorded a pair of strikeouts and walked just one. The lone Lady Indian run was unearned.

Joining Addison Dalton with a 2-for-2 effort was Brinn Brassfield, who drove in a run, scored twice and walked once.

Emrie Ellis also picked up one RBI and scored once while going 1-for-3.

Jordan Odell suffered the pitching loss and had Asher’s only hit in going 1-for-2 and scoring the run. Odell gave up eight hits and four walks while striking out three.

Reed hit a grand slam and pitched a three-hitter Friday as the Lady Wolves rallied to knock off Stuart.

Reed’s blast was the highlight of a five-run fifth and final frame. She struck out nine, allowed no walks and surrendered two unearned runs.

Kara Carlson (2-for-2 with a walk) and Jacee Underwood (2-for-3 with a run scored) had multiple hits for Vanoss, which pounded out eight for the game.

Brian Johnson contributed to this report.

AFTON [ndash] Services for Lana Mayer Wyche, 74, of Afton and formerly of Ada are at 11 a.m. Wednesday at the Criswell Funeral Home Chapel. The Rev. Larry Hawkins will officiate. The family will receive friends from 6-8 p.m. today at Criswell Funeral Home. Mrs. Wyche passed away Saturday, Fe…