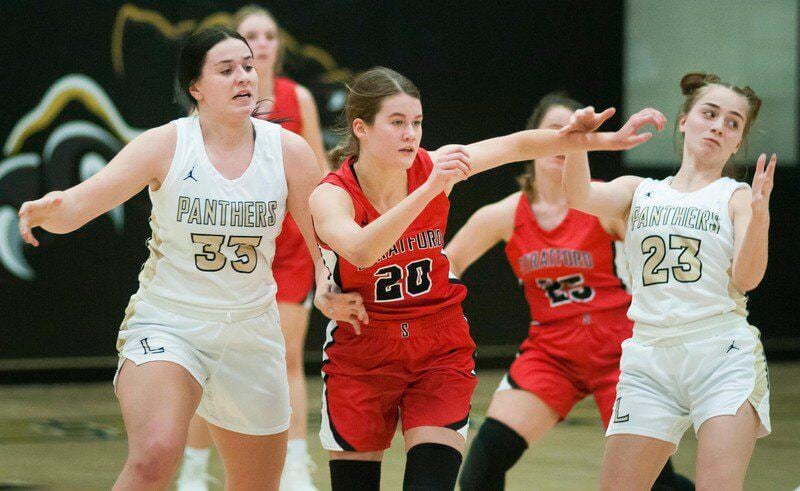 Latta’s Carson Dean (33) and Caitlyn Byrd (23) get tangled up with Kourtney Willingham (20) of Stratford during their local matchup Tuesday night inside the Latta Panther Fieldhouse. 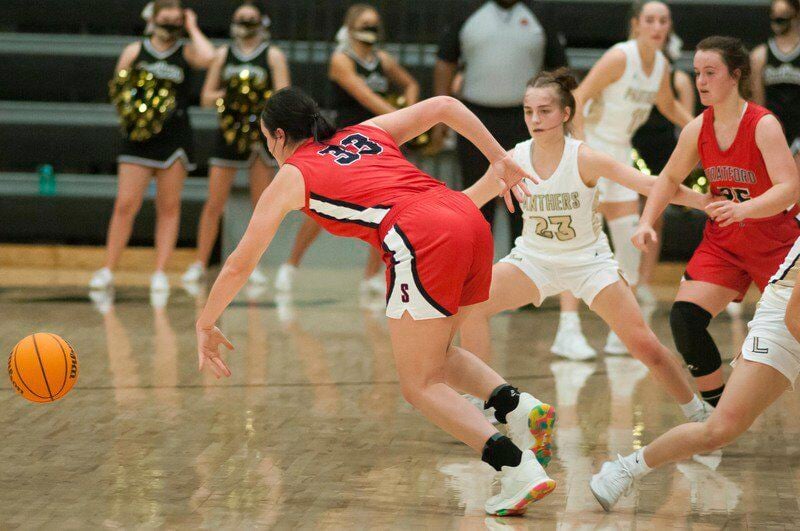 Stratford junior Jaedyn Getman (33) chases down a loose ball against Latta during Tuesday night’s matchup between two of the top teams in Class 2A. Latta won 42-34.

Latta’s Carson Dean (33) and Caitlyn Byrd (23) get tangled up with Kourtney Willingham (20) of Stratford during their local matchup Tuesday night inside the Latta Panther Fieldhouse.

Stratford junior Jaedyn Getman (33) chases down a loose ball against Latta during Tuesday night’s matchup between two of the top teams in Class 2A. Latta won 42-34.

Stratford star junior Jaedyn Getman and her Lady Bulldogs teammates tried to go toe-to-toe with Latta Tuesday night inside the Latta Panther Gymnasium. But in the end, Stratford simply couldn’t quite keep up with the array of weapons Latta head coach Bruce Plunk has at his disposal.

Stratford stayed within striking distance for the most of three quarters before Latta began to pull away for a 42-34 victory in a battle of two of the top teams in Class 2A.

No. 3 Latta improved to 9-2 on the year, while the ninth-ranked Lady Bulldogs dropped to 9-2.

“We expected Stratford to come in and play well and play hard and they did,” Plunk said. “They gave us a run for our money. We’re happy with the win and trying to stay on the course and move forward. We’re playing pretty good.”

However, by the time another Stratford player got into the scoring column — Abbi Phelps got free inside for a point-blank basket — Latta head extended its lead to 22-12.

The Lady Panthers led 24-14 at halftime.

Stratford scored five straight points in the third quarter — on a bank shot by Getman, two Getman free throws and a free throw by Phelps — that cut the SHS deficit to 27-20 at the 3:01 mark.

However, Latta put the game away with an 11-4 run capped by a nice drive to the basket by Carson Dean that gave the home team a 38-24 early in the fourth quarter. Caitlyn Byrd swished a 3-pointer and had a steal that led to a drive down the lane for a buck during that LHS flurry. Chloe Miller also had back-to-back baskets early in the pivotal Latta run.

Getman finished with a game-high 20 points on 7-of-17 shooting from the field and a perfect 4-of-4 effort from the free-throw line. She also had nine rebounds, two steals and a blocked shot. Phelps also hit double digits with 10 points — eight in the first half. Both SHS players hit two 3-pointers each.

Latta got 10 points from Byrd and eight points from both Dean and post player Taryn Batterton.

Jaylee Willis provided a spark off the bench with a team-best seven first-half points on 3-of-3 shooting that included a 3-pointer and a pair of steals that led to layups.

Stratford outrebounded Latta 30-21 but the Lady Bulldogs finished with 16 turnovers compared to just 11 for the Lady Panthers.

Byrd also had five of Latta’s 12 steals in the contest.

Latta is now off to The Wampus Cat Classic today and will meet Idabel at 4:20 p.m. today in a first-round contest.

The Lady Bulldogs are set to compete in the 2021 Byng Winter Classic and face Dickson at 4 p.m. today in a first-round game.