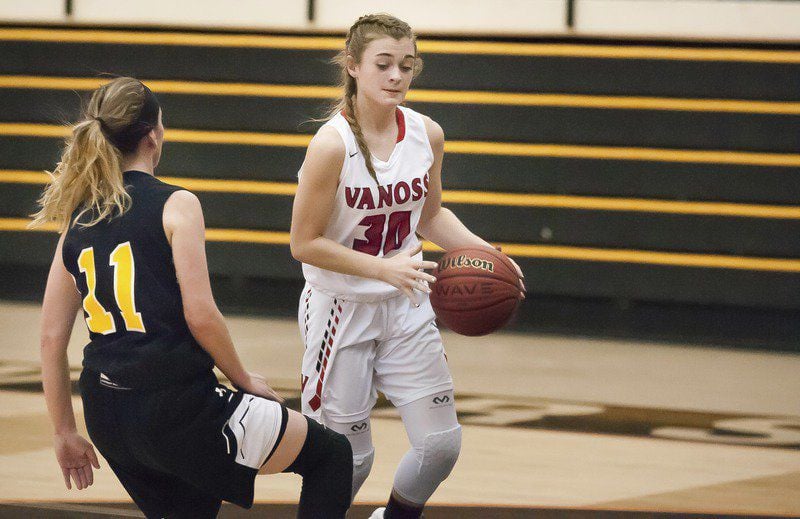 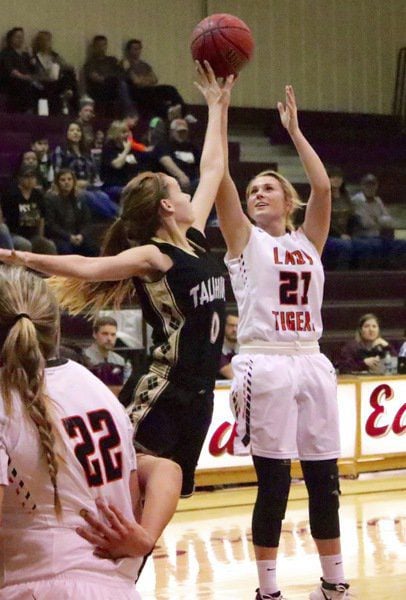 Konawa’s Kayden King puts up a shot against Talihina during a Class 2A Regional Tournament consolation championship game Monday afternoon in Warner. King had 10 points and six rebounds in Konawa’s 63-52 win.

Konawa’s Kayden King puts up a shot against Talihina during a Class 2A Regional Tournament consolation championship game Monday afternoon in Warner. King had 10 points and six rebounds in Konawa’s 63-52 win.

Soar, who had 14 of her points in the second half, also collected two blocked shots and one assist. Gentry followed with 14 points to go with two assists, two steals and a pair of rebounds. King nailed her team’s only 3-point basket in totaling 10 points, six boards and two assists.

“We are very proud of how the girls competed during regionals. We had a lot of foul trouble during regionals but had players step at big times,” said Konawa head coach Ray Ardery. “Today, Kayla Hill stepped up for us in the first half, when we had three starters with two fouls each. Kayla scored eight of her nine points in the first half when we needed it. Frankie Soar had a huge second half with 14 points and controlled the defensive boards.”

Konawa will face Tushka at 6:30 p.m. Thursday in the area tournament at Wilburton.

“Heading into the area tournament, we need to do a better job of staying out of foul trouble and protecting the ball,” Ardery said.

BOONE-APACHE – Top-ranked and unbeaten Christian Heritage Academy raced out to an 18-6 advantage after one quarter and claimed a 59-43 decision over the ninth-ranked Vanoss Lady Wolves on Monday night in a Class 2A girls regional championship clash.

Rileigh Rush paced Vanoss with 14 points Lizzy Simpson followed with 13, Emrie Ellis added 10 and Caitlyn Byrd chipped in six to round out the scoring for Vanoss, which fell to 22-6 on the year. Rush had all three of Vanoss’ 3-pointers.

The Lady Wolves sank 10-of-13 free throws in the contest while Christian Heritage was 16-of-23.

Vanoss will face Latta at 6:30 p.m. Thursday in a Class 2A area elimination game at Chickasha.

ADA [ndash] Sidney Harmon Green, 84, of Ada passed away Monday, April 6, 2020, in Ada. Private family graveside services will be at 2 p.m. Thursday at Memorial Park Cemetery in Ada. Services will be live-streamed via Facebook at Estes Phillips Funeral Home.