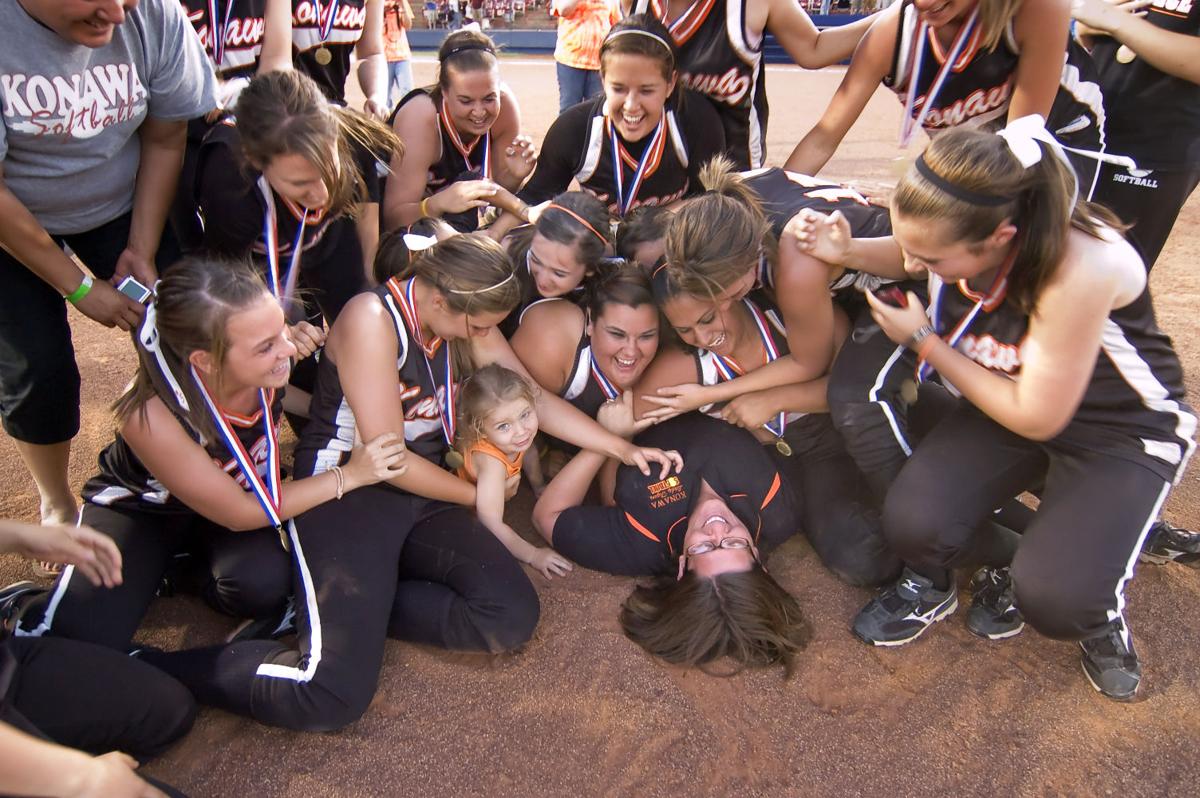 Konawa coach Jennifer Matthews is at the bottom of a celebratory dogpile on the field at Hall of Fame Stadium after the Lady Tigers thrashed top-ranked Colbert, 14-4, in Tuesday’s Class 4A slowpitch state championship game. 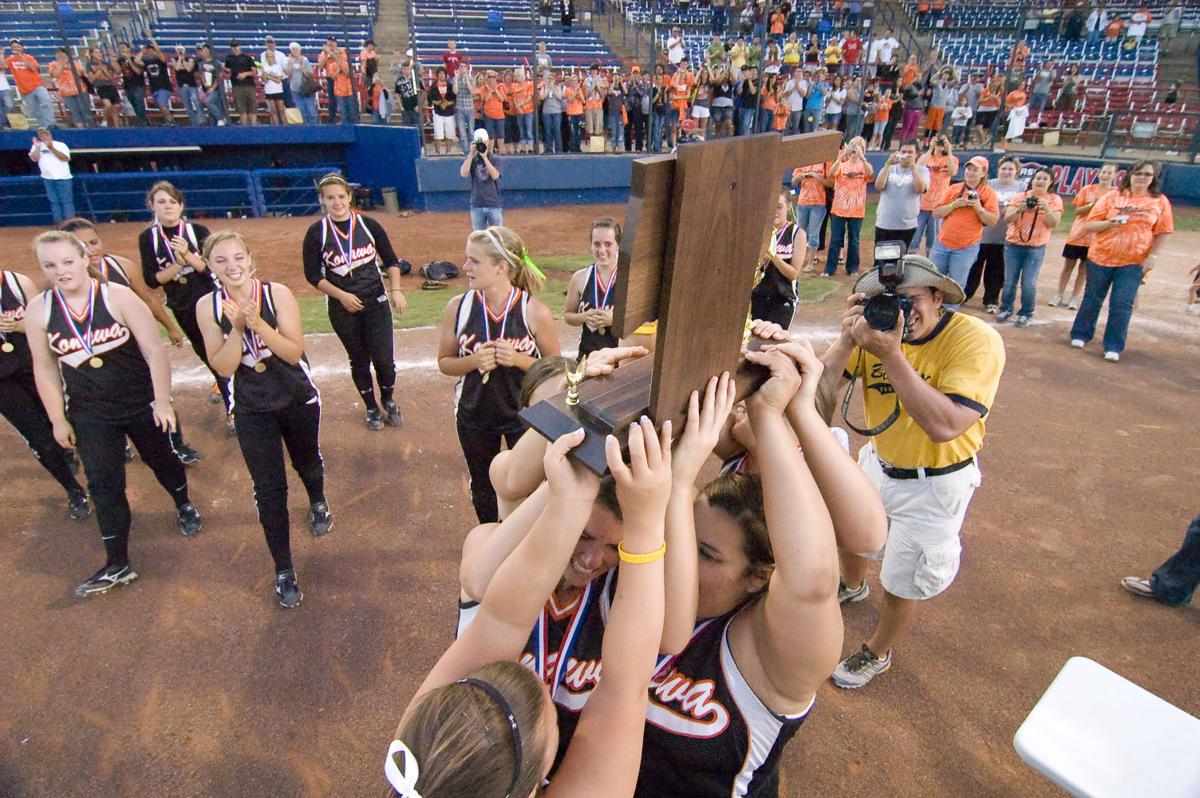 Konawa’s seniors—who were also part of the Lady Tigers’ 2007 Class 2A fast-pitch state championship squad -- hoist the championship gold while the rest of the team looks on.

Konawa coach Jennifer Matthews is at the bottom of a celebratory dogpile on the field at Hall of Fame Stadium after the Lady Tigers thrashed top-ranked Colbert, 14-4, in Tuesday’s Class 4A slowpitch state championship game.

Konawa’s seniors—who were also part of the Lady Tigers’ 2007 Class 2A fast-pitch state championship squad -- hoist the championship gold while the rest of the team looks on.

Konawa’s Lady Tigers picked a great day to have their best day of the season.

On the heels of a breeze through Class 4A’s toughest regional tournament five days earlier, the second-ranked Lady Tigers didn’t just beat their competition Tuesday at the state tournament — they beat them up. Konawa followed an opening-round 16-0, three-inning thrashing of No. 8 Pocola with run-rule victories over two of 4A’s hottest teams — No. 4 Dale, 17-5, in the semifinals and No. 1 (and previously unbeaten) Colbert, 14-4, in the championship game to claim the school’s first slowpitch state title since 2003.

“The girls wanted this one really bad,” said Konawa coach Jennifer Matthews, whose program also claimed a fast-pitch championship in 2007 with a team made up of most of the players who were on the field Tuesday. “They were disappointed with the way the fall ended up (with a 2-1 loss in the Class 2A semifinals).”

Konawa’s run-rule trifecta was a fitting highlight of a 4A state tournament dominated by blowouts. The top four seeds — Colbert, Konawa, Dale and defending champion Washington — all posted first-round run-rule victories, and Colbert’s 15-10 semifinal win over Washington was the only game all day that went the full seven innings.

Matthews rolled the dice against Dale and Colbert, sending No. 1 pitcher Sydney Stoup to right-center in the Lady Tigers’ outfield alignment and putting junior Chelsey Patterson in the pitching circle in a state tournament game for the first time since 2008 against two of the state’s highest-scoring teams in any class. Patterson responded with back-to-back gems, working in and out of trouble against a Dale squad that had run-ruled Konawa, 14-4, at Dale on April 12 and had manhandled No. 3 Mangum, 21-10, in the first round Tuesday, then scattering 10 hits in beating a Colbert club that entered the season finale with a perfect 38-0 record.

“Chelsey pitched in the state tournament as a freshman,” Matthews said. “Dale and Colbert hit a lot of line drives and fly balls. We’re better defensively with Sydney in the outfield, and I knew Chelsey would throw strikes.”

Patterson, who was 3-for-4 with two runs scored and an RBI in the championship game and was 6-for-10 in Konawa’s three state tournament games, said she didn’t find out she was pitching until just before the Dale game.

“I was kind of excited but not really nervous,” Patterson said. “I just tried to throw strikes. I knew I had a good defense behind me.”

Konawa’s offense — which banged out 22 hits in just four at-bats in the Dale win and 48 in the team’s first nine state tournament innings — scored early once again to take the pressure off Patterson. The Lady Tigers (who finished the season 28-8 after playing one of the state’s toughest schedules) sent 14 batters to the plate and scored 10 first-inning runs, and after surrendering four runs and eight hits in the first three innings, Patterson held the Lady Leopards to two hits (both with two outs) and no runs in their final three at-bats.

Two-run singles by Stoup (who doubled and scored in her first at-bat in the inning), Courtney Capps and Melanie Gladden (also her second hit) were the big blows in Konawa’s first-inning explosion. The rally began with consecutive hits by Christina Gladden, Melanie Gladden, Stoup, Capps and Ciara Kuestersteffen, it also included an RBI single by Patterson, and it was extended by two of Colbert’s four errors in the game.

The Lady Leopards responded to the Lady Tigers’ opening salvo with two runs in the bottom of the first on a triple by Savannah Harmon, a double by Jacee Bennett and a single by Morgan Wright — all with two outs — and answered a two-out RBI single by Elda Isaacs in the top of the second with another two-out rally capped by Ashley Gray’s RBI single in the bottom of that inning.

Konawa failed to score in the third, fourth or fifth, but Patterson didn’t allow a run after the third, and her offense finally came alive with three runs in the sixth to ultimately end the game on the run rule.

Kuestersteffen started the sixth-inning rally with her third hit of the game and eighth in 10 at-bats on the day. Patterson also singled with one out, both runners scored on Brooklyn Akerman’s triple to left-center, and Akerman scored the game’s final run on a throwing error. Patterson then worked around a bloop double by losing pitcher Logan Swindell to shut out Colbert in the bottom of the inning and seal the win.

The victory was even more emotional for the Lady Tigers because they were awarded their state championship medals by longtime Konawa assistant coach Jimmy Phillips, who is battling cancer.

“We were mostly just playing for Coach Phillips,” said first baseman Sara Reeves, who joined Stoup and Christina Gladden as four-year starters who played their final game in a Konawa uniform Tuesday. “We knew this would be our last time to play together.”

Stoup had a pair of doubles, scored a run and drove in three while joining Patterson and Kuestersteffen with three of Konawa’s 16 hits. Capps and Melanie Gladden added two hits apiece, and Reeves, Patterson, Melanie Gladden and Christina Gladden scored two runs apiece for the Lady Tigers, who got a hit or a run scored from every spot in the batting order.

Konawa led just 6-3 heading to the bottom of the second before blowing the game open with five runs each in the second and third innings.

Akerman’s two-run triple capped the Lady Tigers’ six-run first — a rally that began with a triple from Christina Gladden, Melanie Gladden’s RBI double and consecutive singles from Stoup, Capps and Kuestersteffen and also featured an RBI single from Reeves.

Melanie Gladden’s two-run double and Stoup’s RBI triple one pitch later were the big blows in the second, and Patterson’s single plated the final two runs in a five-run third that included Kuestersteffen’s third straight single and Melanie Gladden’s third run-producing hit in as many innings.

Patterson — who didn’t allow an extra-base hit in the game — stranded runners at second and third after Dale (33-5) scored two runs in the third, and after ending the top of the fourth with a nifty 6-4-3 double play started by Melanie Gladden and turned by Kuestersteffen, the Lady Tigers ended the game with a run in the bottom of that inning. Isaacs singled and Marcy Robertson doubled to start the rally, and after Christina Gladden was intentionally walked to load the bases, Melanie Gladden lined her fourth hit of the game — a long walkoff single to left-center — over the drawn-in Dale outfield.

In addition to Gladden’s four hits, Konawa (which outhit Dale 22-8) got three apiece from Kuestersteffen and Robertson, two hits apiece from Stoup and Isaacs and two RBIs each from Stoup, Robertson and Akerman in the win.

The Lady Tigers started the day with 10 runs on nine hits — four for extra bases — in the first inning. Capps’ single plated Konawa’s first two runs, Akerman tripled home two more, and after a single by Isaacs scored Akerman, Robertson tripled into the right-field corner to score Isaacs but was thrown out at the plate trying to stretch the hit into a home run. Christina Gladden followed with a triple and scored on an error, and Stoup doubled home Melanie Gladden with the final run in the inning.

Konawa scored six more runs in the third on six hits — including an RBI single from Christina Gladden and consecutive run-scoring hits from Capps, Kuestersteffen and Reeves that ended the game on the run rule.

Christina Gladden, Melanie Gladden, Kuestersteffen, Capps and Robertson had two hits apiece to pace a 15-hit attack, and Stoup allowed just one hit — a leadoff triple in the third inning by Emily Dixon (who was thrown out after she rounded third).