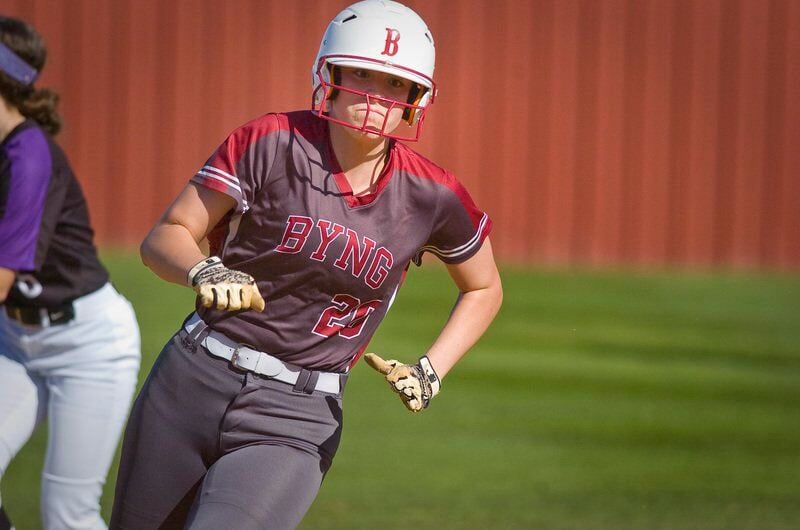 Richard R. Barron | The Ada NewsByng senior Kennedy Large hit for the cycle during the Lady Pirates 17-12 win over Coalgate at home Tuesday night. Large finished a perfect 4-for-4 with a grand slam, a triple, a double, a single and five RBIs. 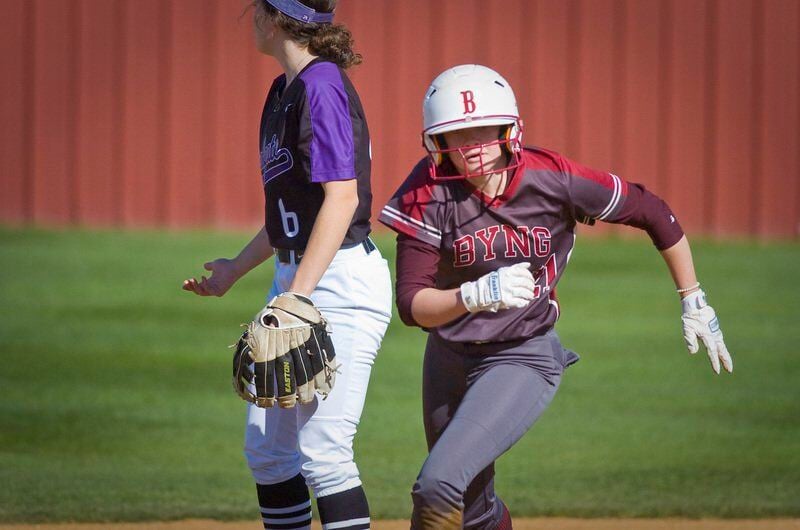 Richard R. Barron | The Ada NewsByng senior Kennedy Large hit for the cycle during the Lady Pirates 17-12 win over Coalgate at home Tuesday night. Large finished a perfect 4-for-4 with a grand slam, a triple, a double, a single and five RBIs.

BYNG — The Byng High School softball team was cruising right along in their matchup with Coalgate Tuesday night in a festival at Bobby Johnson Field.

However, the Wildcats scored nine runs over the final three innings to make it close before dropping a 17-12 decision to the Lady Pirates.

Byng scored five runs in the bottom of the sixth inning to help secure the win.

Britney Brooks-Teel blasted a two-run homer to get that Byng surge started and Alexa Thompson ripped an RBI triple that put Byng on top 15-10.

Kennedy Large hit for the cycle for Byng. She hit a first-inning grand slam, a single to lead off the third, an RBI triple in the fourth and an RBI double in the sixth. She finished a perfect 4-for-4 with five RBIs and two runs scored to lead a 17-hit Byng barrage.

Coalgate piled up 18 hits, including home runs from Breana Hale and Abi Marks. Hale, the CHS leadoff hitter, finished 3-for-4 with a double, four RBIs and two runs scored. Marks went 2-fo-4 with two RBIs and two runs scored, while Josi Lackey finished 2-for-4 with two doubles and a run scored. No. 3 went 2-for-4 with a double, two RBIs and a run scored, while Kaylie Trevathan finished 2-for-3 and scored twice for the Lady Wildcats.

After Bethel scored two runs in the top of the first inning, Byng answered with 14 straight to end the game in three innings via the run-rule.

The Lady Pirates piled up 16 hits led by a stellar outing from McKinley Feazle. The Byng senior finished 3-for-3 with a home run, a triple, four RBIs and three runs scored.

Brooklyn Duff finished 2-for-2 to pace the Bethel offense, while Payton Meiler went 1-for-2 with an RBI. Annie Compton finished 1-for-2 and scored a run for the Lady Wildcats.

Byng is back in action at the 2021 Beast of the East Tournament in Stonewall, which kicks off today and runs through Saturday. Byng battles Stuart at 1 p.m. today in a first-round matchup at the 14-team event.