Paula Ross | For The Ada NewsAda junior Sutton Boyington (27) and other Cougar players signify that it’s their ball during their Week 6 road trip to face John Marshall Friday night. Ada is back on the road this week for a Thursday night Fall Break trip to Harrah. 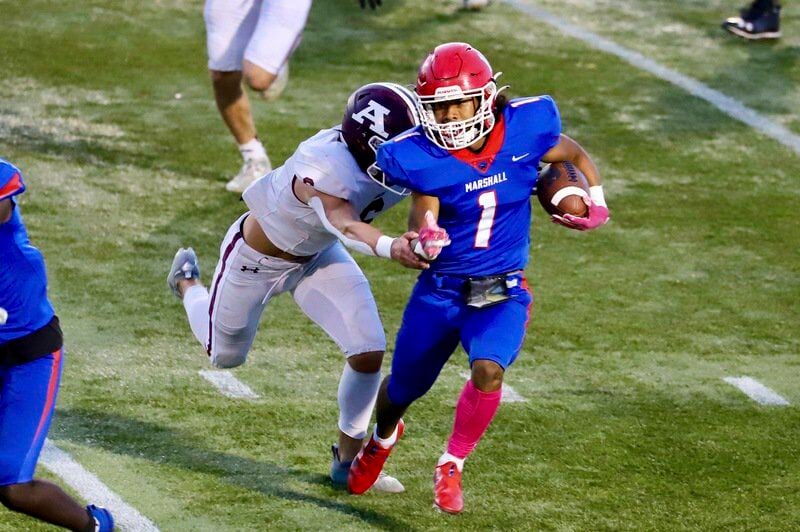 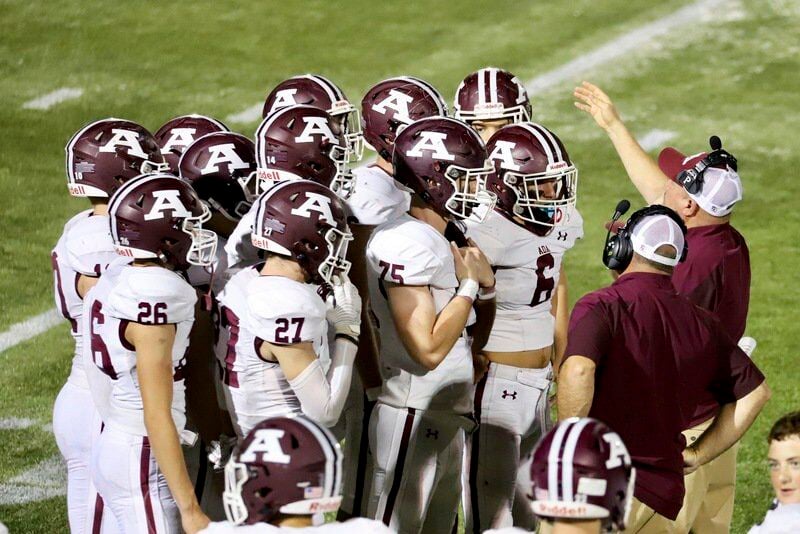 Kristi MitchellAda players huddle up with coaches during a break in the action in a district contest with John Marhall in Week 6 at Taft Stadium.

Paula Ross | For The Ada NewsAda junior Sutton Boyington (27) and other Cougar players signify that it’s their ball during their Week 6 road trip to face John Marshall Friday night. Ada is back on the road this week for a Thursday night Fall Break trip to Harrah.

Kristi MitchellAda players huddle up with coaches during a break in the action in a district contest with John Marhall in Week 6 at Taft Stadium.

That was the recipe for the Cougars’ 26-14 loss to the Bears Friday night on a breezy night at Taft Stadium in Oklahoma City.

The Cougars knocked on the end zone door on their first two possessions of the game but came up empty.

After an 8-yard punt by John Marshall, Ada set up shop near midfield. The Cougars moved to the JM 34 before the drive stalled out.

Brogen Cochran got the ball back for Ada with a fumble recovery and the Cougars marched into the red zone. Fisher Marr caught a 10-yard pass on fourth down to keep the drive alive, but after getting to the JM 11, quarterback Carter Freeland was sacked by John Marshall’s Charles Carter for a 14-yard loss to end that threat.

The Bears then put together a 13-play, 70-yard scoring drive capped by a 1-yard TD run by Carter. A two-point pass was incomplete and the home team led 6-0 at the 9:16 mark of the second quarter.

On John Marshall’s next possession, the Bears again drove the ball down the field on a nine-play, 71-yard drive. A 36-yard romp by tailback Devin Jones got the Bears close before Tango McCauley hauled in a 3-yard TD toss in the corner of the end zone from quarterback Kane Donavan. Another PAT pass failed, leaving John Marshall on top 12-0 with just 1:06 left in the second period.

After a 24-yard kickoff return by Andrew Hughes, Ada hurried the ball down the field. Trey Ivy made a spectacular catch over the head of John Marshall’s Julius Bell for a 37-yard gain to set up Ada at the JM 8 with just 14 seconds left.

Freeland and Hughes connected for an 8-yard TD and Caden Mitchell’s PAT kick was good and the Cougars cut their deficit to 12-7 at halftime.

Ada answered quickly when Freeland hit Hughes around the AHS 35 and the speedy receiver did the rest, racing to the end zone for a 75-yard TD catch and run. Another Mitchell PAT cut the John Marshall lead to 20-14 at the 1:18 mark of the third period.

Ada got the ball back with a chance to tie the game or take the lead and moved to the 45-yard line after a roughing-the-pass penalty on the Bears. However, Kylin Drennon came up with John Marshall’s second interception of the game to foil that Ada march.

Ada’s defense held the Bears again and forced a punt. But the 35-yard kick pinned Ada at its won 15. The Cougars lost nine yards on a fumble and after a first-down pass was dropped, Hughes was forced to punt the ball out of his own end zone against a stiff wind. That resulted in a 14-yard kick that gave the Bears the ball at the 27.

Two plays later, McCauley got free for a back-breaking 22-yard TD run and after a two-point run was stopped short, the Bears led 26-14 with just 2:10 left in the game.

Thanks in part to three John Marshall sacks for minus 36 yards, Ada managed just two total rushing yards in the contest.

Freeland completed 16-of-26 passes for 241 yards with two touchdowns and the two picks. Hughes had six receptions for 130 yards and two TDs. Jack Morris added seven grabs for 61 yards.

The Cougars were without injured running back Darias Gilmore, who gained 316 yards through Ada’s first five games.

John Marshall used a balanced offensive attack to pile up 343 yards of total offense - 174 on the ground and 169 through the air.

Donovan completed an efficient 21-of-24 passes for 169 yards and a touchdown. His favorite target was Jones out of the backfield who caught eight passes for 49 yards. Makel Jackson finished with four catches for 72 yards.

Jones also led the JM rushing attack with 91 yards and a TD on 16 carries.

Ada will try to bounce back Thursday in a Fall Break outing at Harrah. Kickoff is scheduled for 7 p.m. at Evans Field.