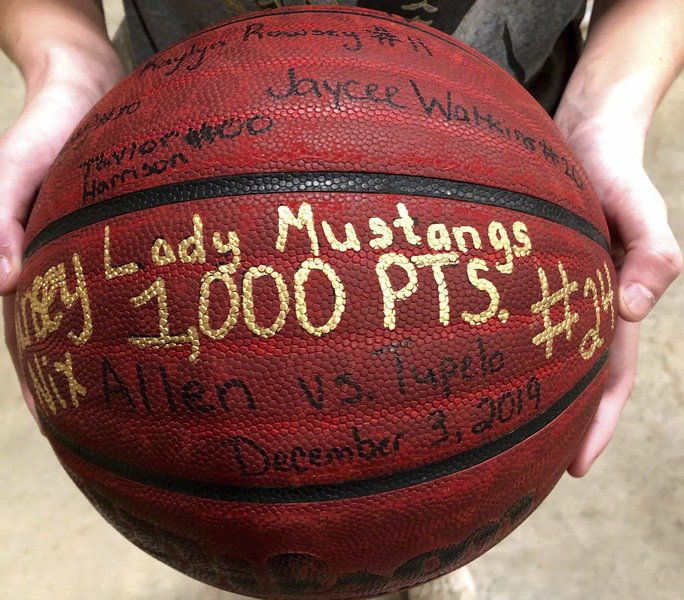 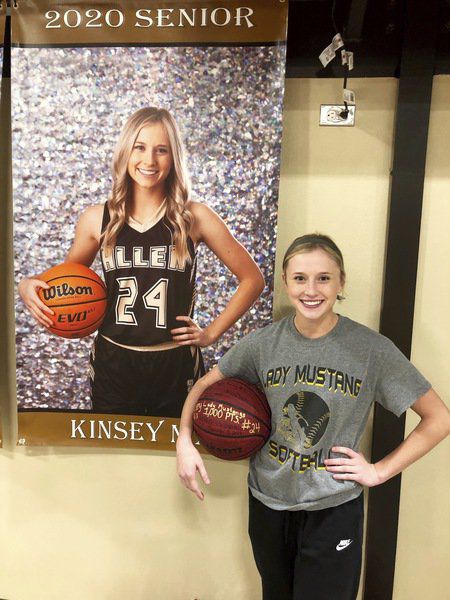 It was, without a doubt, a night to remember for Allen senior Kinsey Nix.

In the midst of the Lady Mustangs’ 49-28 win over Tupelo Tuesday night in the first round of the 2019 Pontotoc Conference Tournament, Nix became a member of the 1,000-point club.

She did it in her first-ever game in Allen’s brand-new gym before a big group of AHS basketball supporters.

It was the first home game under new Allen girls basketball coach Dottie Slabaugh. And, of course, her family and friends were watching from the stands.

“I feel really grateful for everything I got to experience with my teammates,” Nix said during a postgame interview. “My team has helped me get there. They’ve helped me reach 1,000. Without them, I wouldn’t have been able to get there.”

There was also this other thing that happened, ironically just moments before she scored that 1,000th point.

Nix was four points away from the milestone early in the third quarter, when she got the ball on the Tupelo end of the court and the inexplicable happened. Instead of bringing the ball up the court, she turned toward the Tupelo basket and released a jumper that nestled into the basket.

Yes, she indeed scored two points for the Lady Tigers. Her basket, which was officially credited to Tupelo junior Shalyn McCollum, was the first score for the visitors in the period and cut the Allen lead to 30-16.

All Nix could do is smile, shake it off and continue on. She was a great sport about the memorable mistake.

“With the memory of getting 1,000 points, I also got to score two points for the other team. It will be something to think about when I think about my first game in this new gym,” Nix said.

Nix knew she had to be close to her big mark and just got overexcited and caught up in the moment.

“I was just ready to get my 1,000th point. I was just anxious. I wanted to make my hometown proud and got a little bit too aggressive,” she explained.

After her Tupelo score, Nix came down the court and drilled a 3-pointer to put her at 999. She was fouled at the 5:03 mark of the third period and after hitting her first charity shot, announcer Zach Sullivan confirmed that she had reached 1,000.

The game was paused momentarily, and the crowd roared and gave Nix quite an ovation. She grinned from ear to ear, gave a wave and then was back to business, hitting the next free throw to put Allen ahead 35-16.

Less than a minute later, she sank another 3-point shot to put Allen ahead 38-16 at the 4:21 mark. She finished with 18 points and hit all three of her 3-point attempts.

It was a perfect night for Nix, even with the two points that won’t show up on her illustrious career numbers.