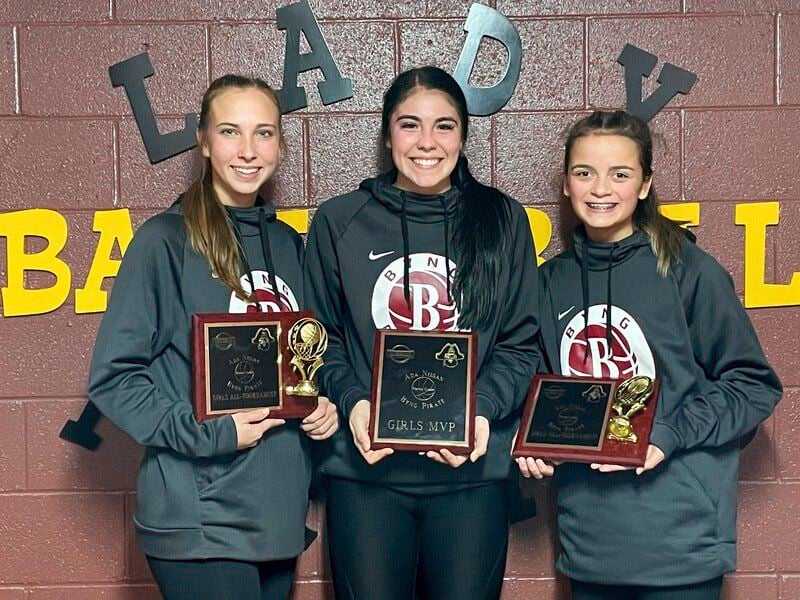 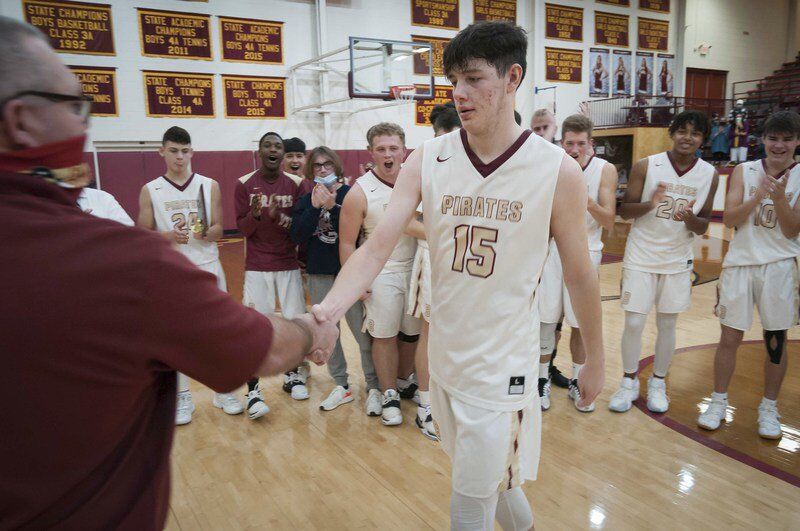 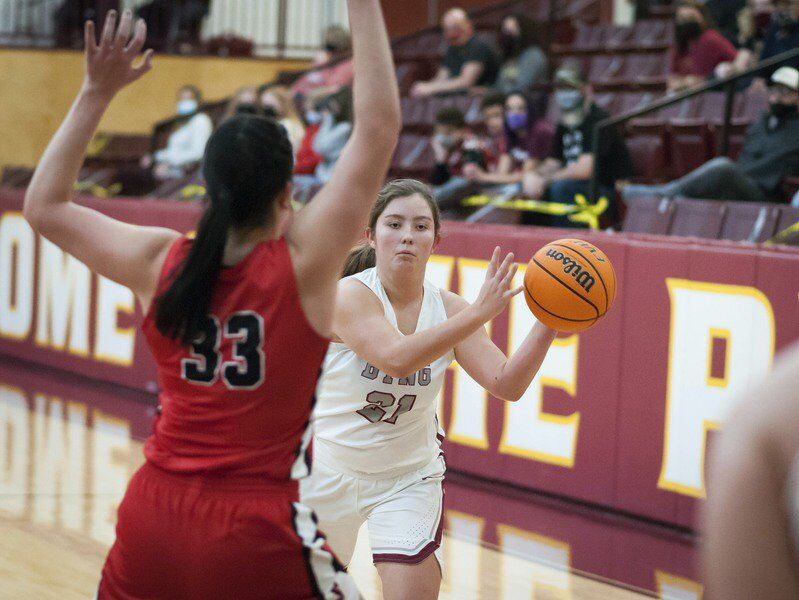 Byng’s MacKenzie Kent (21) and the rest of her Lady Pirate teammates defeated Tecumseh 50-35 in the finals of the 2021 Byng Winter Classic. 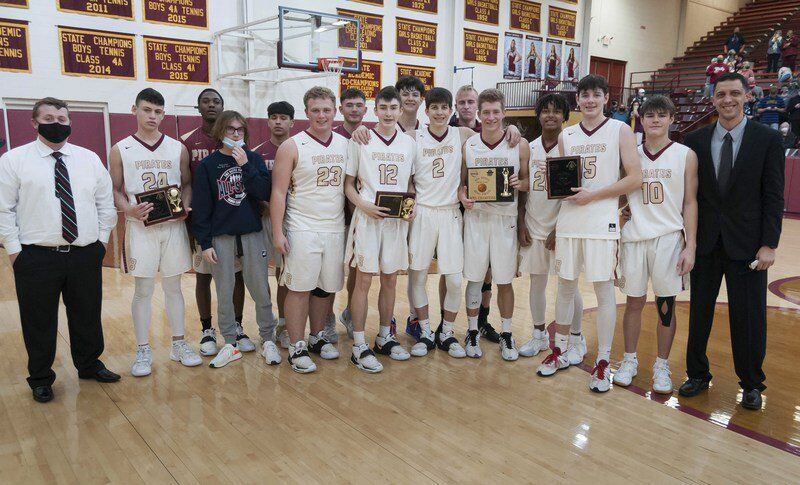 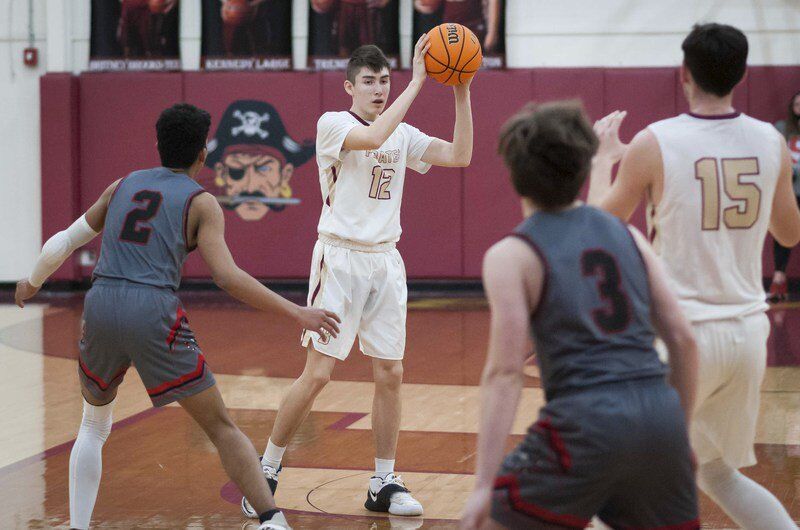 Byng freshman Carter Colombe, a member of the all-tournament team, scored eight points in the Pirates’ 54-50 win over Sulphur in the boys championship contest at the 8th Annual Byng Winter Classic. 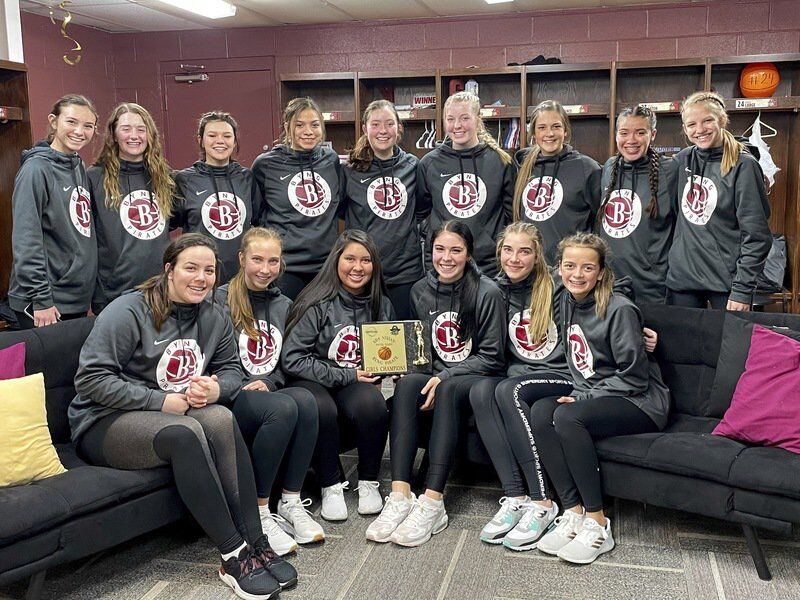 Byng’s MacKenzie Kent (21) and the rest of her Lady Pirate teammates defeated Tecumseh 50-35 in the finals of the 2021 Byng Winter Classic.

Byng freshman Carter Colombe, a member of the all-tournament team, scored eight points in the Pirates’ 54-50 win over Sulphur in the boys championship contest at the 8th Annual Byng Winter Classic.

BYNG — The Byng Pirates made just enough big plays down the stretch to turn back Sulphur 54-50 in the finals of the 8th Annual Byng Winter Classic Saturday night.

Byng, winners of six straight games, improved to 11-3 on the year, while Sulphur dropped to 7-7.

In the girls title contest, the Lady Pirates also claimed a championship with a 50-35 win over Tecumseh. Byng, ranked No. 14 in Class 4A, improved to 10-1 on the year and are sporting a nine-game win streak. No. 19 Tecumseh dropped to 12-4.

The game went back and forth the entire night. Byng led 17-12 after the first period, only to see Sulphur get within 22-20 by halftime.

Sulphur then used a 14-11 run to grab a 34-33 lead heading into what turned out to be an exciting final eight minutes.

Byng won the contest by outscoring Sulphur 21-16 in the fourth quarter.

“This was a late January game that had the feel of a regional final playoff game. I was proud of the mental toughness and poise our team showed during the pivotal possessions through the game, especially late in the second half,” said Byng head coach Zack Samaha. “I can’t say enough about my guys. They grew up so much in this tournament and found ways to win some tough ball games and come away with a championship. Credit to Sulphur for playing an outstanding game and battling for 32 minutes.”

Byng senior Parker Presley, who was named the tournament MVP, scored 24 points and had nine rebounds to lead the way for the Pirates. Carter Colombe finished with eight points and four boards and Malachi Schilreff added seven points and five assists.

“It was a collective team effort that gave us the victory, but Parker Presley stood out not only tonight but the entire tournament. He carried us at crucial times with his scoring and shot creation for himself and others on offense and timely defensive rebounds,” Samaha said.

Freshmen Schilreff and Colombe were named to the Byng Winter Classic all-tournament team.

“Our freshmen are stepping up and are playing confident basketball,” he continued. “They already possess a poise and winning attitude that is rare for players of their experience,” Samaha said. “I couldn’t be prouder of the development of our freshmen as a whole — especially our two all-tournament selections. To get one freshman selected to an all-tournament team is good, to get two is remarkable.”

Byng sank eight 3-pointers in the contest — two by Colombe, Presley and Schilreff and one each from Cooper McCage and Caden Azlin.

Byng senior leader Kennedy Large scored a game-high 29 points — including 10 in the fourth quarter — to help the Lady Pirates pull away in the win.

Byng led just 12-10 after the first quarter and 19-16 at halftime. However, the Lady Pirates began to pull away with a 12-5 run in the third period that pushed the BHS advantage to 31-21.

“It was a good win versus a quality Tecumseh team. I thought we finished the game well and defended well against some offensive players that can be tough to guard,” said Byng head coach Trent Miller.

Large went a perfect 8-of-8 from the free-throw line in the fourth quarter and sank 11-of-13 free shots overall. Large was named the tournament’s MVP.

Freshman Alona Cooper scored 15 points for the hosts, including a pair of 3-pointers.

Tecumseh got a team-high 12 points from Tawny Billy and 11 more from Kenzli Warden, who hit three 3-pointers.

Tecumseh finished 9-of-10 from the charity stripe.

Both Byng teams are back in action Friday, hosting Kingston.

Stratford led 15-8 after the first quarter before heading to an odd second quarter that included just three total points via a 3-pointer by Jaedyn Getman that made it 18-8 at halftime.

Coach Mark Savage’s team salted the game away from the free-throw line in the fourth quarter, making 9-of-10 attempts. Stratford didn’t make a field goal over the final eight minutes.

Getman finished a solid tournament run with 18 points, while teammate Abbi Phelps sank three 3-point baskets and finished with 16. Getman was named to the all-tournament team.

Stratford is scheduled to host Maud on Friday and Allen on Saturday.