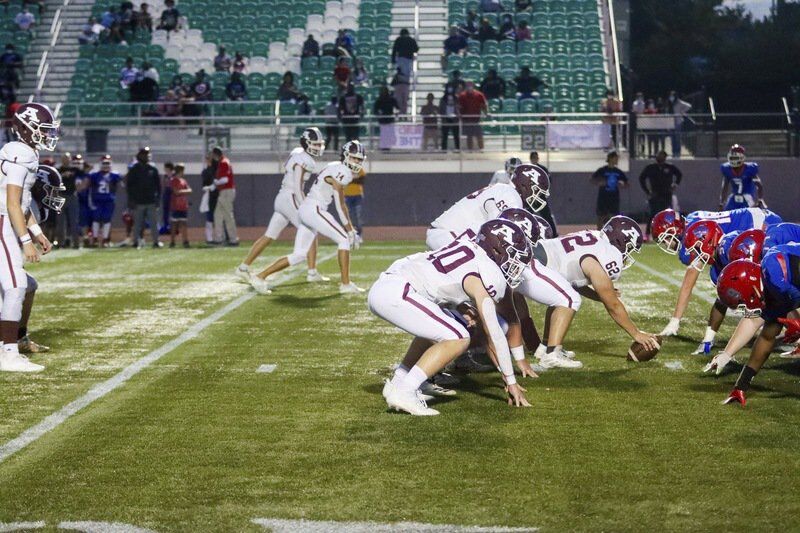 The Ada offense, shown in last week’s game against John Marshall, finished with 457 yards of total offense in Thursday night’s road game against Harrah. The Cougars are scheduled to host No. 1 Tuttle in a Week 8 showdown next Friday at Norris Field. 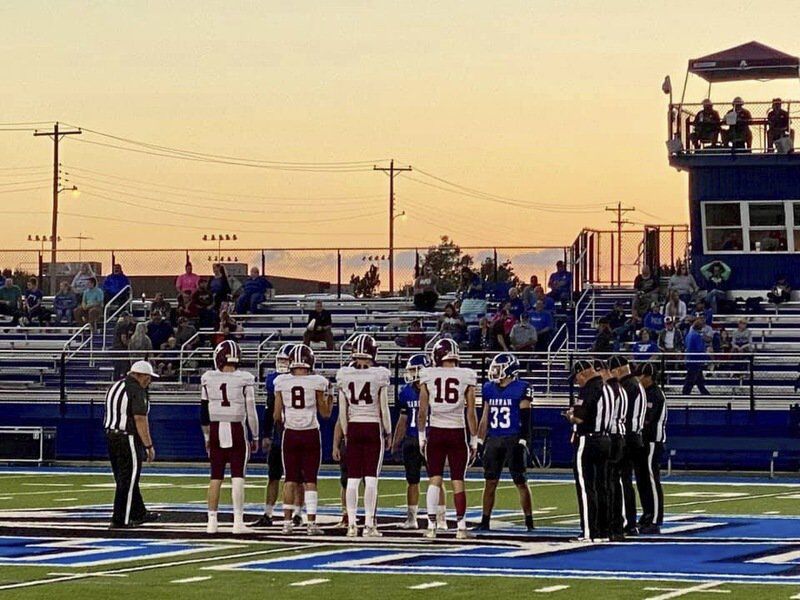 Ada team captains Carter Freeland (1), Trey Ivy (8), Andrew Hughes (14) and Brogen Cochran (16) meet at midfield for the coin flip prior to the Cougars’ District 4A-2 battle with Harrah Thursday night at Evans Field. 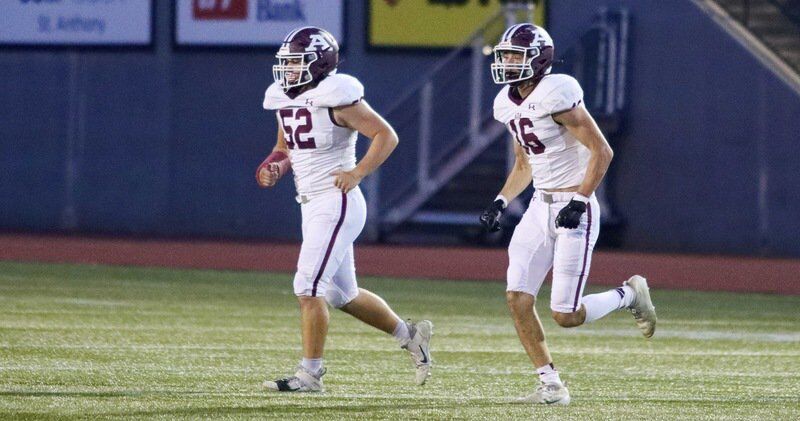 Ada players Caden Balthrop (52) and Brogen Cochran (16) run onto the field during their Week 6 matchup last Friday at Taft Stadium in Oklahoma City. The Cougars dropped a 38-33 decision to the Panthers.

The Ada offense, shown in last week’s game against John Marshall, finished with 457 yards of total offense in Thursday night’s road game against Harrah. The Cougars are scheduled to host No. 1 Tuttle in a Week 8 showdown next Friday at Norris Field.

Ada team captains Carter Freeland (1), Trey Ivy (8), Andrew Hughes (14) and Brogen Cochran (16) meet at midfield for the coin flip prior to the Cougars’ District 4A-2 battle with Harrah Thursday night at Evans Field.

Ada players Caden Balthrop (52) and Brogen Cochran (16) run onto the field during their Week 6 matchup last Friday at Taft Stadium in Oklahoma City. The Cougars dropped a 38-33 decision to the Panthers.

HARRAH — In a game where neither team punted, Ada receiver Jack Morris hauled in an 11-yard touchdown pass from quarterback Carter Freeland to put the Cougars on top 33-31 with 1:21 left in the game during a pivotal District 4A-2 battle with Harrah Thursday night at Evans Field.

Come to find out, that was plenty of time for the Panthers to strike back.

The Cougars fell for the third straight time and now stand at 2-5 overall and 1-3 in District 4A-2 play, while Harrah improved to 5-2 and 3-1. Tuttle and Blanchard sit atop the district standings at 4-0 followed by Cushing and Harrah at 3-1. Ada is tied with John Marshall for fifth place.

The Cougars now face an uphill battle to climb into the fourth-place spot and earn a playoff berth.

Against Harrah, Ada even won the turnover battle 2-0, but simply couldn’t get enough defensive stops on this night.

It was a crazy back-and-forth battle right from the start. There were seven combined possessions in the first half and every one ended with a score — six touchdowns and a field goal.

The Harrah ground and pound game was every bit as good as advertised, at least on this night. The Panthers piled up a hefty 434 rushing yards. The Cougars also appear to have their running game back on track. After gaining a grand total of two rushing yards during last week’s 26-14 loss at John Marshall, Ada finished with 279 yards on the ground against Harrah.

The Cougars ended up with 457 yards of total offense compared to 466 for the Panthers.

The back and forth first-half scoring went as follows:

• Harrah workhorse running back Nick Moore fought his way into the end zone from the 1 on the opening drive of the game. He had seven total carries on the 10-play, 77-yard drive. After a PAT kick by Cameron Marler, the Panthers led 7-0 at the 7:27 mark of the opening frame.

• The Cougars marched 80 yards in 10 plays on their first offensive possession. Tailback Darius Gilmore, who returned to the AHS starting lineup after missing last week’s contest with an injury, did most of the work and capped the drive with a 3-yard touchdown run. Following an Ada penalty a along PAT kick by sophomore Caden Mitchell just missed, leaving Harrah on top 7-6 at the 4:06 mark.

• Harrah quickly moved down the field with it’s powerful running attack which produced four runs of nine or more yards. Moore scored on an 11-yard scamper on the final play of the quarter and a Marler PAT kick put the home team on top 14-6.

• Sophomore Keandre Grant gave Ada great field position by catching the kickoff on the bounce and returning it 26 yards to near midfield. Ada receiver Andrew Hughes gained 11 yards on an end around and Gilmore eventually scored from the 2. Freeland connected with Sutton Boyington for a two-point conversion and the game was tied at 14-14 at the 9:38 mark of the second period.

• Moore had a 27-yard romp during Harrah’s next scoring drive. Boone scored on another keeper from the 1 — the friendly folks in the press box called it a Boone-dozer formation — and another PAT kick put Harrah ahead 21-14.

• Gilmore made arguably his best run of the night, knifing through the Harrah defense and racing down the sideline for a 28-yard touchdown jaunt. A Harrah defender blocked the PAT kick and Ada trailed 21-20 at the 2:21 mark of the second period.

• Harrah again managed to get into the red zone, but the Ada defense finally managed to keep the Panthers out of the end zone. Marler kicked a 27-yard field goal that looked like it was going wide left but snuck around the goal post and Harrah led 24-20 at halftime.

Another big key to the game was that Harrah got eight points — five PATs and the field goal — by Marler and Ada’s kicking game produced just one point.

Ada struck quickly to open the third quarter. Freeland hit receiver Trey Ivy with a long pass down the far sideline on the second play from scrimmage. Ivy dove toward the end zone but fell two yards short but still gained 81 yards — the longest play by either team on the night. After Freeland scored from the 1, Mitchell’s PAT kick put Ada ahead 27-24 a the 10:40 mark of the third period.

The Cougars then got a huge break when Harrah receiver Austin Coley tipped the ball high into the air while trying to make a catch. Ada’s Jonah Ascencion snagged an interception, setting up the AHS offense near midfield.

It looked like Ada had the perfect opportunity to build a two-score lead. After a series of Gilmore runs, the Cougars faced a 1st-and-goal from the 4. However, after two plays that went for minus yards and a penalty, Ada was pushed back to the 14 yard-line on fourth down and a pass in the end zone fell incomplete.

The Panthers then used a back-breaking 10-play, 86-yard drive capped by a 5-yard touchdown run by Moore on the first play of the fourth period to take a 31-27 lead. The big play of the drive was a 22-yard run by the HHS quarterback on a Boone-dozer play.

Ada drove to the Harrah 34 yard-line on its next drive. But on 4th-and-10, Freeland couldn’t find an open receiver and scrambled down the field but was stopped less than a yard short of the first down.

Harrah then tried to move down the field and score a dagger touchdown. But at the end of a 20-yard keeper, Boone fumbled the ball and Nate Richardson leaped on it for the Cougars.

That set up frantic finish.

Moore and Gilmore stole the statistical show. The Harrah back finished with 260 yards and three touchdowns on an incredible 32 carries. Gilmore ended up with 183 yards and three scores on 28 touches.

Boone finished with 130 yards and two scores on 15 carries and completed 4-of-7 passes for 32 yards. Freeland countered by completing 11-of-21 passes for 181 yards and the one TD.

The Cougars have a tall task in Week 8 when they host No. 1 Tuttle next Friday at Norris Field. The Tigers improved to 7-0 on the season with a 56-8 win at Classen SAS Thursday night.