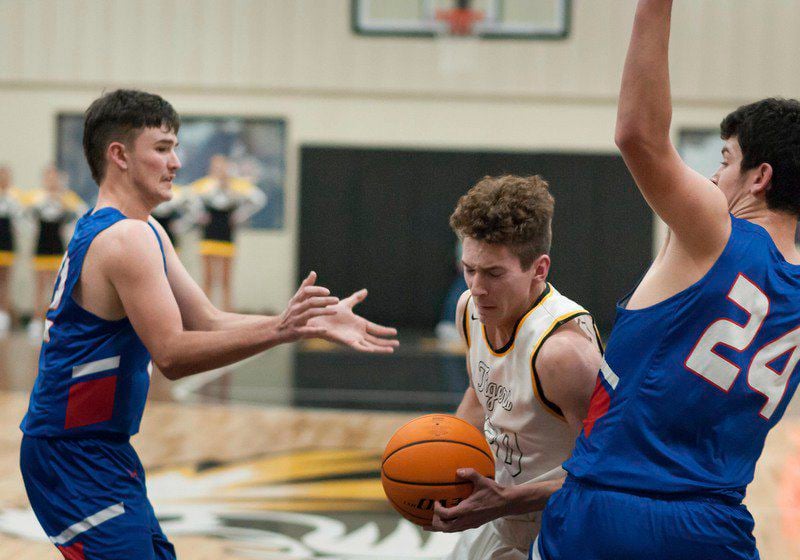 Richard R. Barron | The Ada NewsTrayson Miller of Roff (20) tries to score against Ft. Cobb-Broxton’s Kyler Denton (24) during a contest between two of the top teams in Class A Saturday night inside the Roff Gymnasium. No. 3 Ft. Cobb defeated No. 11 Roff 63-50. 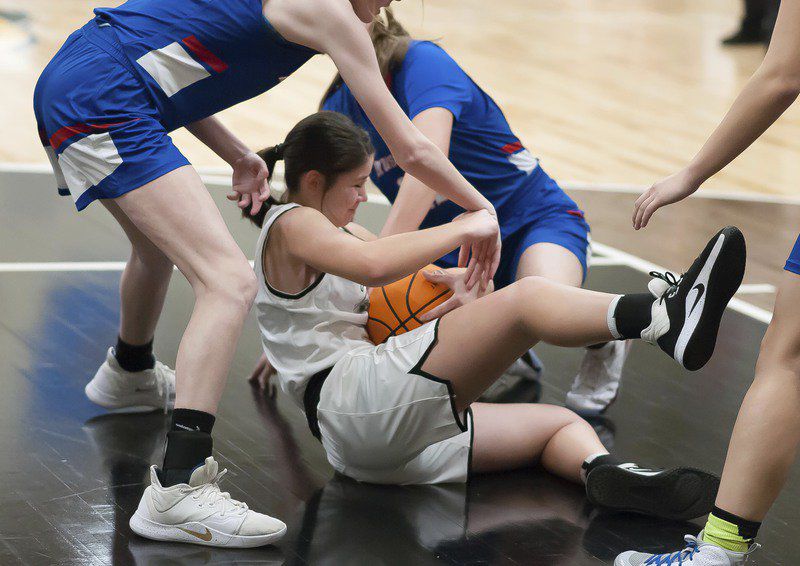 Richard R. Barron | The Ada NewsRoff’s Payton Owens tries to keep the ball away from a pair of Ft. Cobb-Broxton defenders during their matchup Saturday evening inside the Roff Gymnasium.

Richard R. Barron | The Ada NewsTrayson Miller of Roff (20) tries to score against Ft. Cobb-Broxton’s Kyler Denton (24) during a contest between two of the top teams in Class A Saturday night inside the Roff Gymnasium. No. 3 Ft. Cobb defeated No. 11 Roff 63-50.

Richard R. Barron | The Ada NewsRoff’s Payton Owens tries to keep the ball away from a pair of Ft. Cobb-Broxton defenders during their matchup Saturday evening inside the Roff Gymnasium.

But the Lady Tigers scored just three points in the third quarter and committed 22 turnovers in a tough 36-32 loss.

Roff led 19-15 at halftime, but Ft. Cobb outscored the hosts 15-3 in the second quarter and carried a 30-22 advantage heading into the final eight minutes.

The Lady Tigers tried to rally.

Abby Salter hit two free throws to get Roff started in the final period, and Chloe Edlred drained a clutch 3-pointer at the 6:33 mark to get the hosts within 30-27.

After Ft. Cobb’s Brittany Lacy missed two free throws, Eldred scored on an inbounds play to make it 30-29 with 4:24 left in the game.

Madison Shulanberger sank a pair of free shots at the 3:03 mark that knotted the score at 31-31, and Payton Owens hit one of two from the stripe with 1:21 left that put Roff on top 32-31.

The Lady Mustangs got a huge three-point play from Ashlynn Lewis 16 seconds later that put the visitors on top for good at 34-32.

Ft. Cobb got nine points from both Lewis and Gonzales, who also had five steals. Kelby Edge finished with eight points, eight rebounds and two steals for the Lady Mustangs.

The Roff girls now head to the playoffs and meet Haileyville (11-13) at 6:30 p.m. Friday in a Class A District Tournament elimination game. The winner of that contest will advance to play sixth-ranked and unbeaten Strother (20-0) in the district title contest.

No. 3 Ft. Cobb pushes past Tigers

Third-ranked Ft. Cobb-Broxton used a big finish to the second quarter to grab a double-digit lead and host Roff never could claw its way back into the game in a 63-50 loss to the powerful Mustangs Saturday evening inside the Roff Gymnasium.

Roff never led in the second period, but when Trayson Miller scored on a putback with just under four minutes left before halftime, the Tigers were within 18-17.

The Mustangs answered with a 13-4 run and after Drew Woods drained a 3-pointer late in the frame, Roff trailed 31-21 at the break.

The Tigers got within single digits three different times early in the third quarter — the last on a Miller jumper that cut the Ft. Cobb lead, to 36-28 with just under six minutes left.

Roff never got closer than 12 the rest of the way.

Miller had a solid overall game in defeat. He finished with 19 points and 10 rebounds.

Joplin also had double figures with 10 points on 4-of-6 shooting, including a pair of 3-pointers. Aiden Bagwell was next with seven points for the hosts.

It’s on to the playoffs now for the Tigers, who will battle the Haileyville-Strother winner at 8 p.m. Saturday in a Class A District championship game inside the Roff Gymnasium.