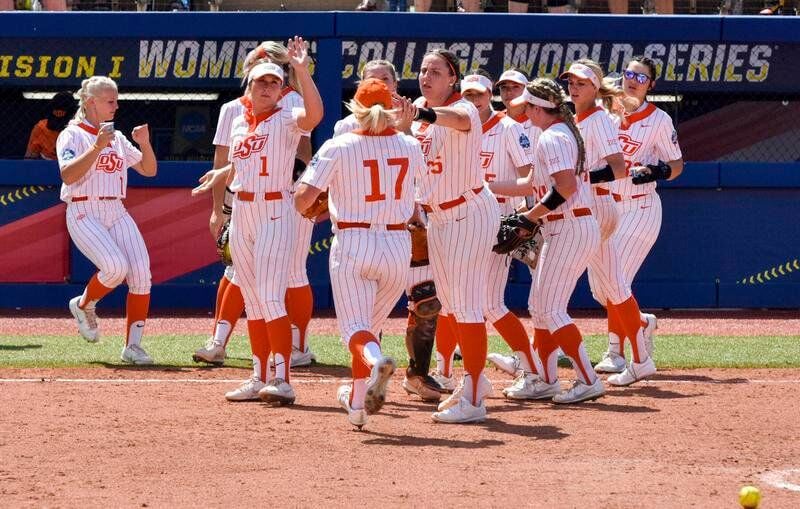 Oklahoma State pitcher Carrie Eberle gives a high-five to right fielder Hayley Busby (17) after she gunned down a Georgia base runner at home plate during Thursday’s College World Series game. 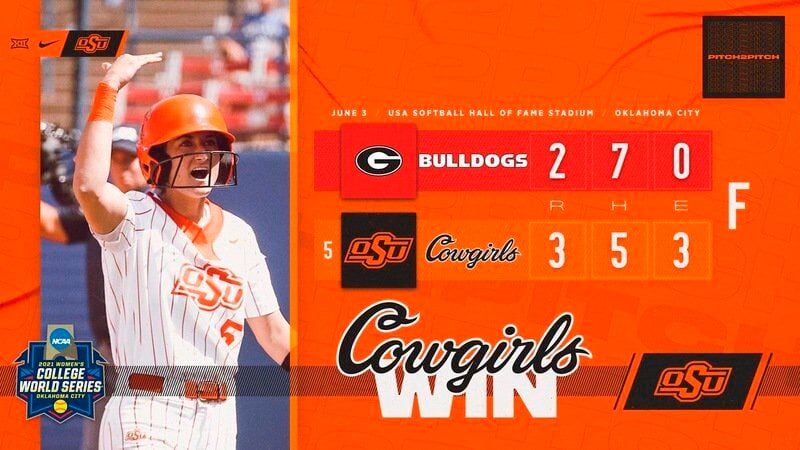 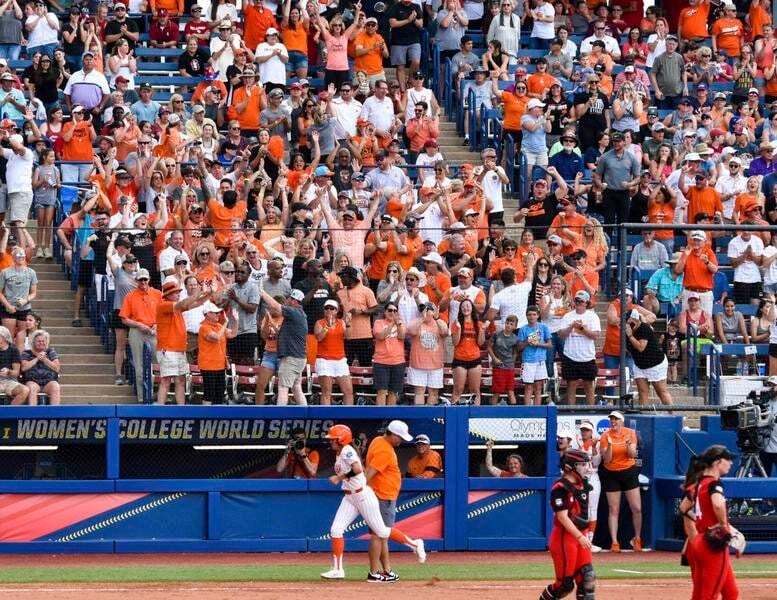 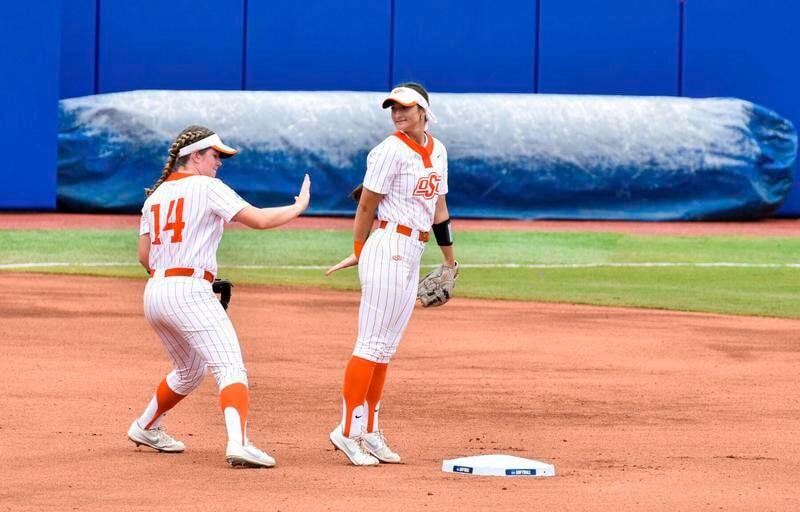 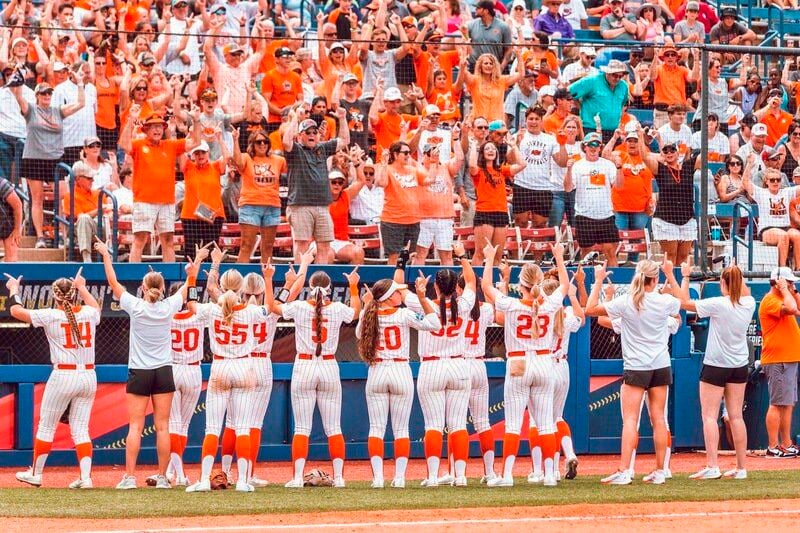 Oklahoma State players celebrate with their fans after defeating Georgia 3-2 Thursday at the Women’s Softball World Series in Oklahoma City. 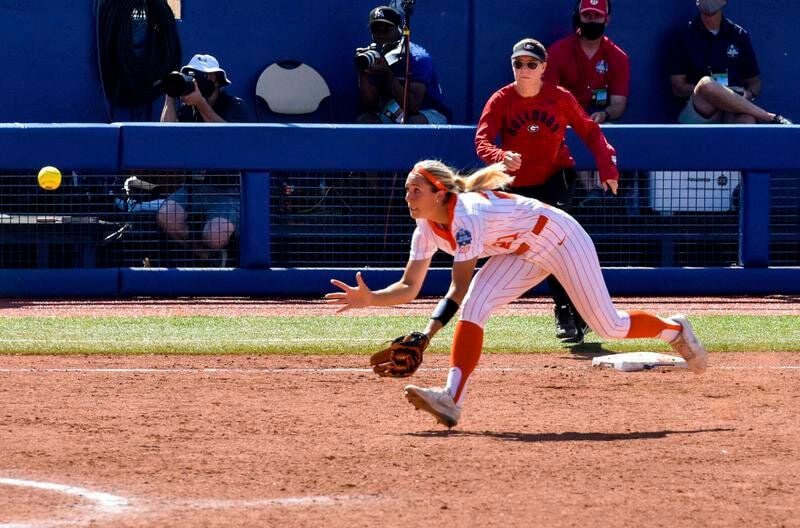 Oklahoma State third baseman Sydney Pennington tracks down a chopper for the final out of Thursday’s College World Series game against Georgia. 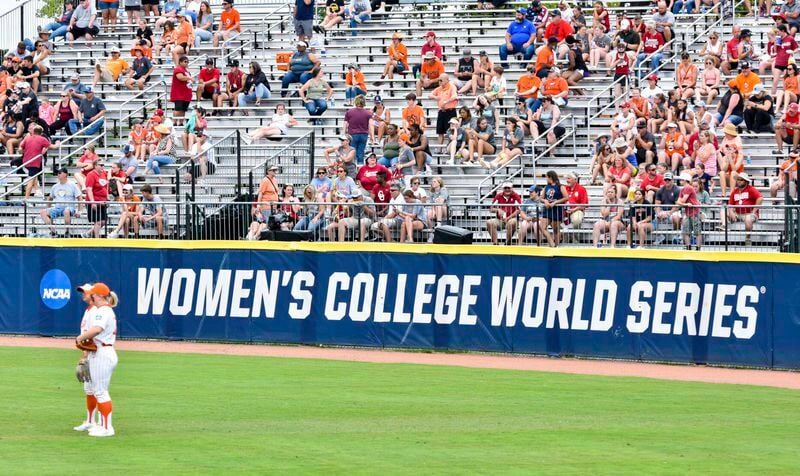 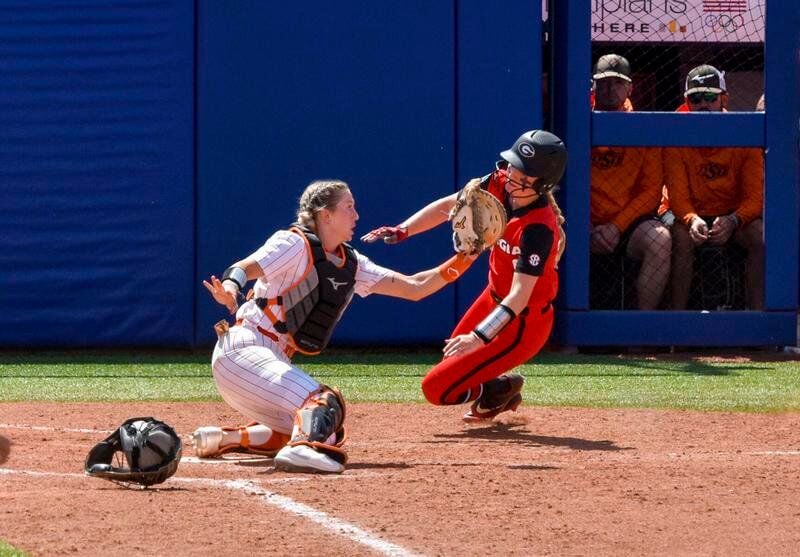 Oklahoma State pitcher Carrie Eberle gives a high-five to right fielder Hayley Busby (17) after she gunned down a Georgia base runner at home plate during Thursday’s College World Series game.

Oklahoma State players celebrate with their fans after defeating Georgia 3-2 Thursday at the Women’s Softball World Series in Oklahoma City.

Oklahoma State third baseman Sydney Pennington tracks down a chopper for the final out of Thursday’s College World Series game against Georgia.

OKLAHOMA CITY – Chyenne Factor delivered one of the biggest hits of her career Thursday afternoon and it propelled Oklahoma State to a win over one of the hottest teams in the country.

Factor blasted a home run that broke a scoreless tie in the Cowgirls’ first game of the Women’s College World Series at the USA Softball Hall of Fame Complex.

It helped OSU defeat Georgia, 3-2, stay on the winner’s side of the bracket and avoid playing Bedlam rival Oklahoma in an elimination game Saturday morning.

The win over Georgia, which entered Thursday’s game 5-0 in the postseason, set up the Cowgirls to face another red-hot team Friday. They played James Madison, which entered the WCWS unseeded but defeated No. 1 Oklahoma, 4-3, in eight innings.

Last month, Gajewski said Factor nearly walked away from softball following her sophomore year at OSU. She became a star as a freshman, playing in all but six games and starting 46 of those.

At the plate, Factor led the Cowgirls with a .338 batting average. She also hit nine home runs, which tied the program’s record for a freshman season.

One of Factor’s biggest moments came when she robbed a home run in the 2019 WCWS. Yet, less than a year later, she wasn’t having the same type of individual success and began to fall out of love for the game.

Although the COVID-19 pandemic ended the Cowgirls’ season early, it gave Factor time to think about the game she used to love. She returned to OSU this year, and is once again part of a WCWS team that won its opening contest.

“I still feel like COVID was really good for her,” Gajewski said. “Wasn’t good for everyone. For Chyenne, it really helped her just to look through life and softball, everything, with a different lens. Sometimes it’s good to step back and look through a different lens, understand what you have, how to appreciate what you have, just put things into better perspective.”

Factor entered the game with five home runs on the season, and hadn’t hit one since May 7 – the opening game of the Bedlam series. She was even hitless in the past three games in seven at-bats.

However, she came through with a clutch hit in the third inning Thursday. With Avery Hobson on first – after recording a leadoff single – and two outs down, Factor drove a 1-2 pitch over the center field wall. It was nearly robbed by Georgia’s Jayda Kearney, but cleared the wall just past her glove.

Factor gave her squad a 2-0 lead that remained until the sixth inning.

“I mean, it’s been no secret. I haven’t been having very good at-bats through supers,” Factor said. “My first at-bat wasn’t very good. That pitch, it was kind of up if I remember correctly. I just decided to swing and not be defensive, and good things happened.”

Gajewski credited an aggressive call during her at-bat that sparked Factor’s home run.

“I decided to put on a run-and-hit, which is kind of like a hit-and-run except I’m trying to get the hitter to be a little bit more aggressive,” Gajewski said. “She swung at a ball down. I thought to myself, that swing is the one I want, like that one right there. The next pitch is the one she hit out. … The action I think is what put her in a more offensive mindset, just what she needed. This kid is really good.”

OSU added an insurance run in the bottom of the sixth inning. Kiley Naomi led off with a single and Factor laid a sacrifice bunt, advancing Naomi to second.

Alysen Febrey, who transferred from Georgia after the 2019 season, hit a pitch up the middle for an RBI single, giving the Cowgirls a two-run cushion.

“I think she went 2 for 3 at the plate, got the biggest run of the game, the insurance run,” OSU pitcher Carrie Eberle said of Febrey. “I mean, she’ll clean up the defense. She always adjusts. It won’t be an issue.”

Despite trailing the whole game, Georgia made things interesting in the final three innings. In the fifth, the Bulldogs put two runners on base before Payden Bordeau hit a single in which Sydney Chambley attempted to score.

OSU right fielder Hayley Busby fielded the ball that booted off Febrey’s glove and into the grass, and fired home. OSU catcher Reagan Wright tagged Chambley out. The next batter grounded out, and the Cowgirls escaped the first real threat from Georgia.

“I mean, that was a huge play,” Eberle said. “The momentum really could have shifted there. But she shut it down. That’s what you need, what you’re asking for from her. She even had a great throw later in the game, that a little bit earlier she probably would have gunned another one out.”

The Cowgirls wouldn’t be so lucky in the sixth inning. Sara Mosley hit a single that scored Sydney Kuma from second base. Kuma was nearly tagged out, but Wright was called for obstruction and the run trimmed the lead in half.

In the seventh, Georgia put runners on base with a third OSU error, a single and fielder’s choice before Ellie Armistead drilled a RBI double that scored Jaiden Fields. The Bulldogs elected to hold CJ Landrum at third.

The move backfired as an infield pop up and groundout ended the game. The game-tying run was left at third base.

“When I looked at C.J. coming around, I saw the ball,” Georgia coach Lu Harris-Champer said. “If I could do it again, I’d absolutely send her. I did think it was going to be really close at the plate.”