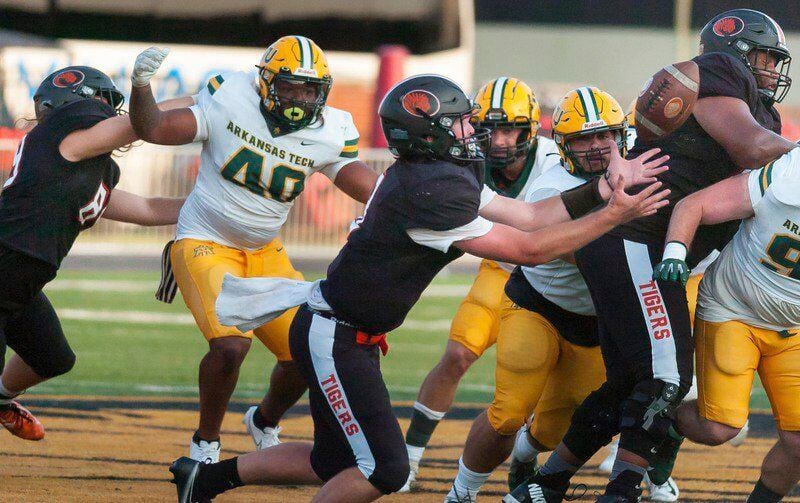 East Central quarterback Kenny Hrncir tries to track down the football against Arkansas Tech during their contest Saturday night at Norris Field. Hrncir threw for 129 yards and rushed for 61 more in ECU’s 13-10 victory. 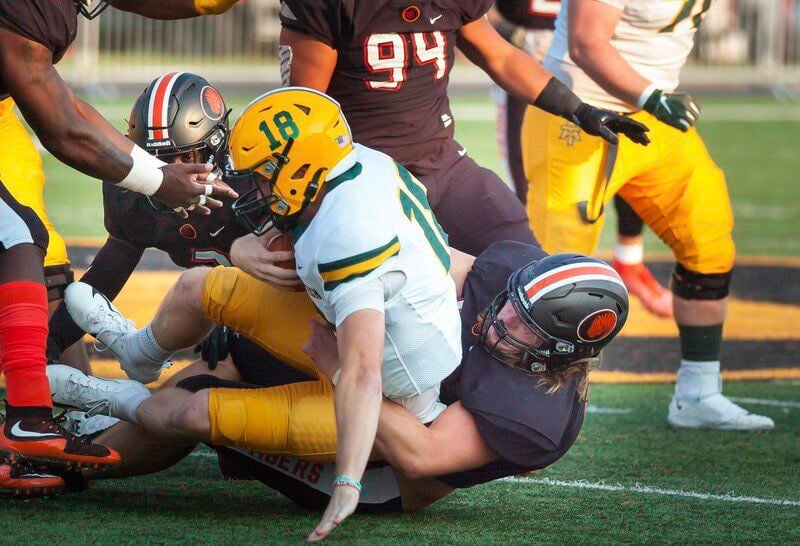 East Central quarterback Kenny Hrncir tries to track down the football against Arkansas Tech during their contest Saturday night at Norris Field. Hrncir threw for 129 yards and rushed for 61 more in ECU’s 13-10 victory.

The East Central University football team finally scored its first touchdown of the season Saturday against Arkansas Tech and it proved to be the difference in a 13-10 win over the Wonder Boys inside Koi Ishto Stadium.

East Central improved to 1-1 heading into a Homecoming matchup with Southern Nazarene University. Kickoff for that contest is 6 p.m. Saturday at Norris Field. Arkansas Tech left town at 0-2 after dropping a 38-20 decision to Southeastern in Week 1 at Russellville, Arkansas.

“It was good to get a win. Sometimes getting that first one is the hardest,” said ECU head coach Al Johnson following the game.

After the Wonder Boys used a 3-yard touchdown run by Brandon Hunter to get within 13-10 in the fourth quarter, the ECU offense got the ball with 5:23 still left in the game. However, the ATU offense never got back on the field. The Tigers used 11 plays to move from their own 25 down to the ATU 11 before quarterback Kenny Hrncir took a knee with 53 seconds left to end the game.

“It was almost the same as 2019 only we were going the other way,” Johnson said, referring to a 31-30 victory over the Wonder Boys in which the Tigers used 17 plays to go 64 yards and drain the final 8:51 off the clock. “That’s not easy to do — to hold the ball the last four or five minutes of a game and not give it back to them.”

“The o-line and tight ends and receivers really grounded it out with Mookie.”

“Our defense played really great and our special teams was so much better,” Johnson said.

The Tiger offense wasn’t as bad as the scoreboard might indicate. ECU piled up 418 yards of total offense. However, multiple trips to the ATU red zone resulted in just two field goals and the lone TD.

“Offensively we did a good times but we just didn’t get into the end zone. We missed too many big plays — whether it was overthrown or dropped passes or penalties,” Johnson said. “We hurt ourselves. We really have to fix the offense and get into a rhythm. If we hit a couple of shots when we get into the red zone, this isn’t even a game.”

And oh, all those penalties. ECU finished with 15 for a whopping 125 yards.

“The penalties have to stop. It was terrible. It killed our drives a couple of times,” Johnson said. “Getting into the red zone and not being able to score touchdowns is a killer.”

East Central kicker Garrett Clark hit field goals of 28 and 27 yards in the first half and the home team led 6-3 at the break. The two teams traded touchdowns in the second half.

“Anybody that studies football knows if you have 10 guys on defense going the right way and they don’t throw it at the one guy going the wrong guy, you’re OK. But on offense, all 11 players have to be doing their job,” he said. “They have to take a deep breath and each player needs to focus on doing their job and their job only.”

Douglas passed the 100-yard rushing mark for the 12th time in his career. The ECU workhorse finished with 162 yards on 28 carries. Hrncir completed 11-of-22 passes for 129 yards and rushed for 61 more.

Caleb Batie led the Wonder Boys with 16 carries for 86 yards.

TIGER NOTES: ECU receiver Jackson McFarlane, an Ada High graduate, had just one catch for four yards. But his most memorable play came when an Arkansas Tech player dislodged his helmet and it rolled some 20 yards behind the line of scrimmage. ... Jones was ejected from the game after back-to-back unsportsmanlike-conduct penalties in the fourth quarter ... Clark had a short field goal blocked at the 12:52 mark of the fourth quarter. ... The Tigers only let star punter Jack Preston kick the ball once. It was a nice 45-yarder late in the second period.