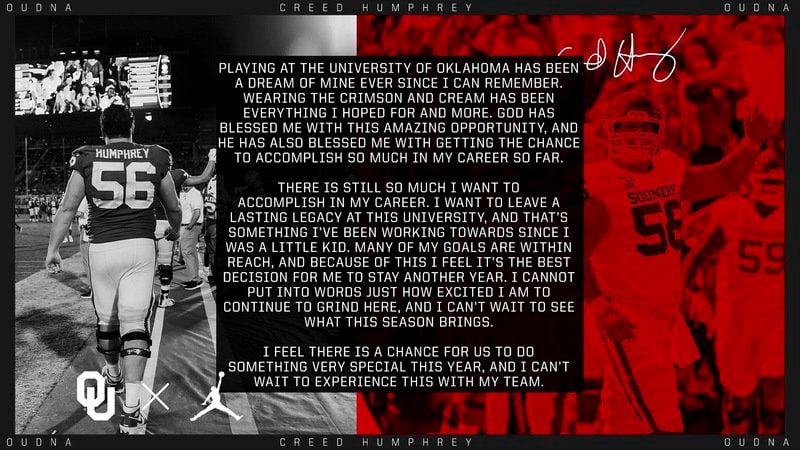 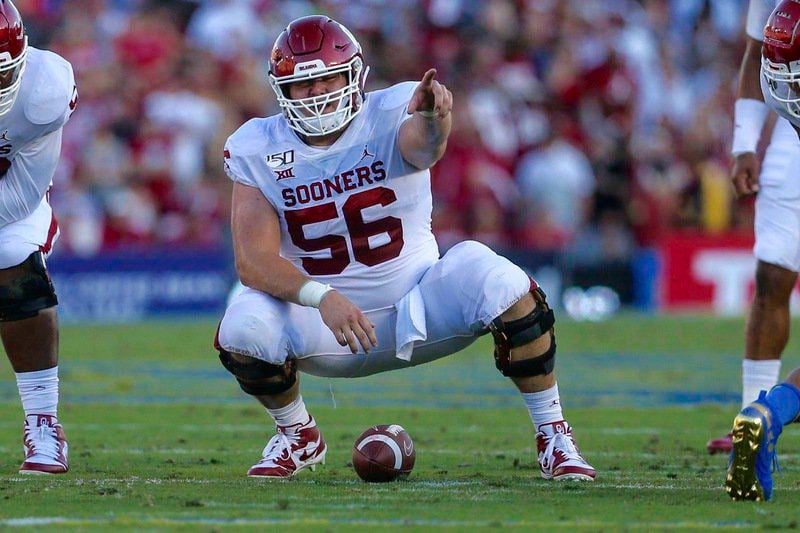 Oklahoma redshirt sophomore offensive lineman Creed Humphrey makes a call during the game against UCLA last season. Humphrey will return to OU next season instead of entering the NFL Draft.

Oklahoma redshirt sophomore offensive lineman Creed Humphrey makes a call during the game against UCLA last season. Humphrey will return to OU next season instead of entering the NFL Draft.

NORMAN — The Oklahoma stars who’ve entered the NFL Draft since the Peach Bowl — linebacker Kenneth Murray and receiver CeeDee Lamb — were mostly expected to do so.

Creed Humphrey, who anchors OU’s offensive line at center, was more of a mystery until last weekend.

He announced on Twitter that he will return to OU for his redshirt junior season in 2020, which keeps most of OU’s offensive line intact with the exception of graduate transfer R.J. Proctor, who played several positions but split time at left tackle with Erik Swenson.

“There is still so much I want to accomplish in my career,” Humphrey wrote in a statement posted to Twitter. “I want to leave a lasting legacy at this university, and that’s something I’ve been working towards since I was a little kid. Many of my goals are within reach, and because of this I feel it’s the best decision for me to stay another year.

Humphrey, right tackle Adrian Ealy, right guard Tyrese Robinson, left guard Marquis Hayes and, presumably, Swenson at left tackle had a tumultuous season with several injuries early on. The unit never quite jelled as some of OU’s past lines did.

Humphrey started all 14 games last season and has 26 starts for his career. For a long time, he has been considered the Sooner with perhaps the most NFL potential.

But he didn’t have quite the 2019 season some imagined for him. OU’s offensive line ranked No. 43 nationally, according to Pro Football Focus.

“The Sooners were rarely done in by their offensive line, but they certainly weren’t paced by them in 2019, either,” PFF’s Cam Mellor wrote. “As a unit, they ranked just 46th in pass-blocking grade, and their highest-ranking position ranked just 42nd in pass protection, as Ealy and the combination of Erik Swenson and R.J. Proctor proved to be just slightly above average this season.

“A favorite for All-American at center, Creed Humphrey finished with a significantly lower grade than he did a year ago and gave up 12 total pressures in 2019.”

Humphrey can improve his NFL stock and help OU accomplish what it feels is unfinished business, after losing 63-28 in the Peach Bowl to LSU.

With his return, the Sooners will break in a new quarterback, likely Spencer Rattler or Tanner Mordecai, with the luxury of an experienced group up front.