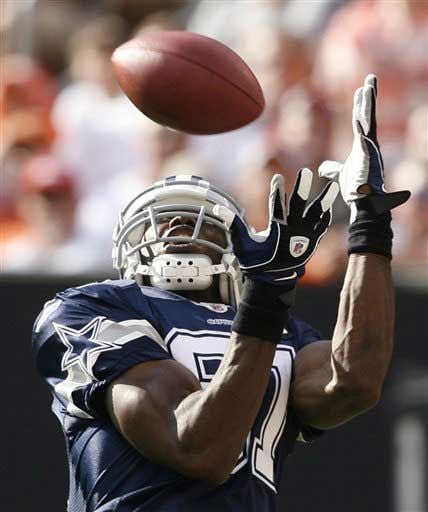 Dallas Cowboys receiver Terrell Owens hauls in a 35-yard touchdown pass from quarterback Tony Romo during the second quarter of their game Sunday in Cleveland. Owens had five catches for 87 yards in Dallas’ 28-10 victory over the Browns. 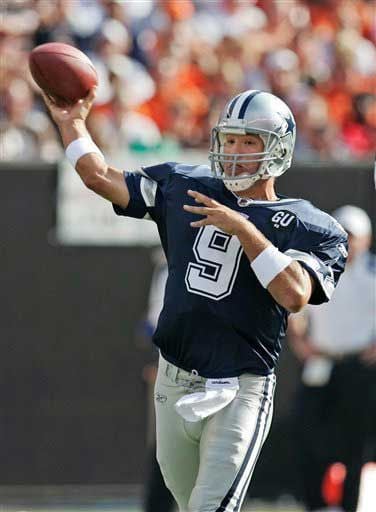 Dallas Cowboys quarterback Tony Romo fires a 35-yard touchdown pass to wide receiver Terrell Owens in the second quarter of an NFL football game against the Cleveland Browns on Sunday.

Dallas Cowboys receiver Terrell Owens hauls in a 35-yard touchdown pass from quarterback Tony Romo during the second quarter of their game Sunday in Cleveland. Owens had five catches for 87 yards in Dallas’ 28-10 victory over the Browns.

Dallas Cowboys quarterback Tony Romo fires a 35-yard touchdown pass to wide receiver Terrell Owens in the second quarter of an NFL football game against the Cleveland Browns on Sunday.

CLEVELAND (AP) — T.O. and his talented teammates were way too much for the Browns. Terrell Owens caught a 35-yard touchdown pass, Tony Romo effortlessly picked apart Cleveland’s secondary, Marion Barber scored on a pair of 1-yard runs and the Dallas Cowboys opened a season they expect to end with a Super Bowl title by overwhelming the Browns 28-10 on Sunday. Coming off a 13-win season, which ended with a bitterly disappointing playoff loss at home to the New York Giants, the Cowboys lived up to all their preseason hype with a solid all-around performance. They’re the team to beat in the NFC, and after one game, it’s hard to argue there’s any better. With Romo completing 24 of 32 passes for 320 yards, Dallas’ offense controlled the clock and strung together four long touchdown drives. The defense held one of the AFC’s most potent offenses in check, and except for some silly penalties, the star-studded Cowboys had a dazzling debut. Owner Jerry Jones was all smiles as was LeBron James, Cleveland’s NBA superstar and longtime Dallas fan who spent part of the pregame hugging Jones and Owens and can’t seem to find it in his heart to root for the other local teams. Owens had five catches for 87 yards, Jason Witten six for 96 and Barber rushed for 80 yards and 16 carries before leaving in the third quarter with bruised ribs. The Cowboys also got their first look at Adam “Pacman” Jones, the cornerback/punt returner, who was recently reinstated after serving a 17-month suspension and played his first game since Dec. 31, 2006, for Tennessee. Starting at corner for the injured Terence Newman, Jones was called for interference in the end zone to set up Cleveland’s only TD. The Browns, saddled with enormous expectations, fell flat in their opener again. Cleveland is just 1-9 in Week 1 since returning to the league in 1999. The Browns began last season by being trounced 34-7 by the Pittsburgh Steelers, who will visit next Sunday night in a nationally televised game — the first of five on Cleveland’s rugged schedule. Browns general manager Phil Savage said Dallas would be a good measuring stick for his up-and-coming team. He probably didn’t imagine the Cowboys would look this much better. Cleveland’s only touchdown came on Derek Anderson’s 2-yard pass to Kellen Winslow in the second. Anderson went 11-of-24 for 114 yards but never got into a rhythm with wide receiver Braylon Edwards, who had only two catches and dropped at least two, including one in the first quarter on what would have been a sure TD. Jamal Lewis had 62 yards on 13 attempts, but the Browns had to play from behind and couldn’t count on their workhorse. For a long stretch, Romo moved the Cowboys with such ease it was as if they were working against the scout team during training camp. The Cowboys, who led 21-7 at halftime, had touchdown drives of 80, 69, 69 and 86 yards, the final one capped by an 11-yard TD run by rookie Felix Jones on his first regular-season carry. He finished with 62 yards. Barber, being counted on as Dallas’ primary back after splitting time last season with Julius Jones, plowed through a huge opening for his second short TD as the Cowboys opened a 21-7 lead with 26 seconds left before halftime. Earlier in the quarter, Owens blew past safety Brandon McDonald and hauled in his TD pass from Romo to give the Cowboys a 14-7 lead. One of the league’s most celebrated end zone showmen, Owens placed the ball near the goal line, shook each leg as if he was getting ready to get into the starting blocks and take on Olympic blur Usain Bolt in the 100 meters. It was his 130th career TD, tying him with Cris Carter for second on the career list behind Jerry Rice (197). Romo went 5-for-5 for 66 yards — 49 of them to Witten — as the Cowboys drove from their own 20 the first time they had the ball, taking a 7-0 lead on Barber’s 1-yard dive. Cleveland’s safeties not only couldn’t handle Witten, they couldn’t seem to find the 6-foot-5, 262-pounder who was wide open on three catches. The Browns responded with an impressive, 16-play, 78-yard drive helped by three Dallas penalties to tie it 7-all on Anderson’s toss to Winslow. Two plays before the score, Pacman Jones was called for interference when he tackled Edwards in the end zone after being beaten on an inside cut by Cleveland’s wideout.