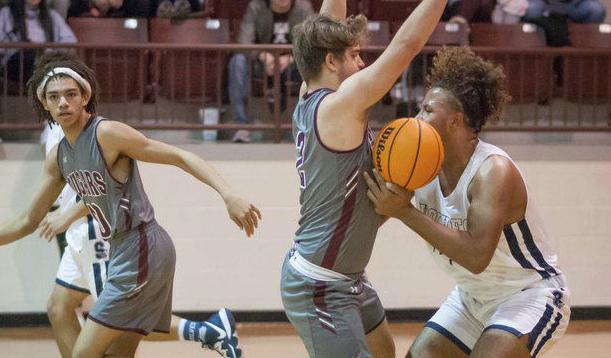 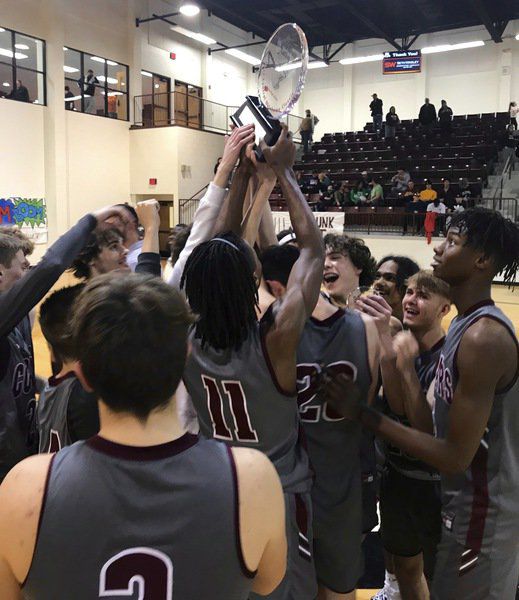 The Ada High boys basketball team celebrates with the trophy after defeating Shawnee 30-24 in the finals of the East Central Oklahoma Classic Saturday night inside the Cougar Activity Center. 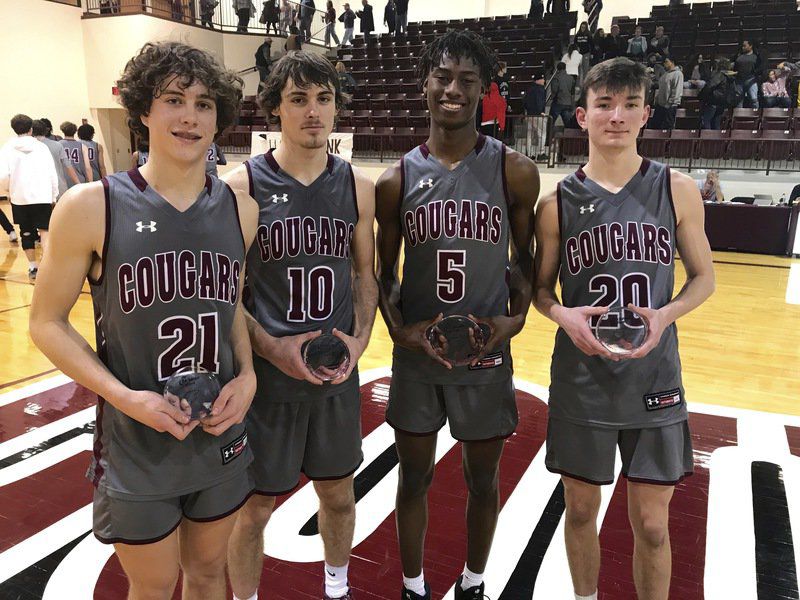 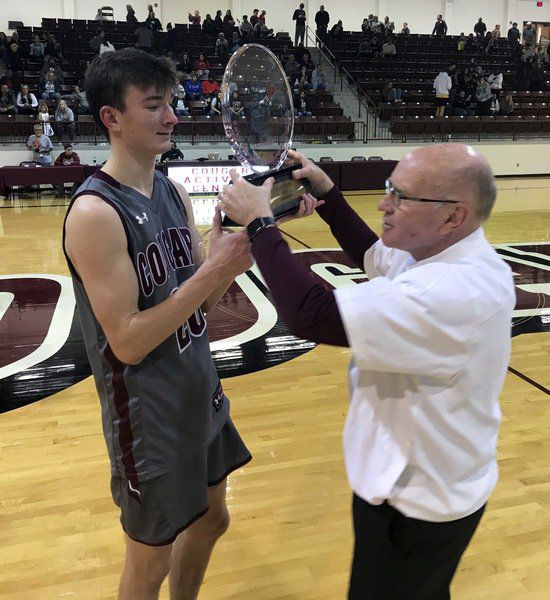 Ada's David Johnson accepts the trophy from athletic director Bryan Harwell after the Cougars captured first place in the 2020 East Central Oklahoma Classic. It's the first Ada won its own tournament since 2001.

The Ada High boys basketball team celebrates with the trophy after defeating Shawnee 30-24 in the finals of the East Central Oklahoma Classic Saturday night inside the Cougar Activity Center.

Ada's David Johnson accepts the trophy from athletic director Bryan Harwell after the Cougars captured first place in the 2020 East Central Oklahoma Classic. It's the first Ada won its own tournament since 2001.

The Ada Cougars’ third meeting of the season with Class 5A No. 4 Shawnee turned out to be the charm.

In what one onlooker called a fist-fight version of a basketball game, the Cougars made just enough big plays down the stretch to grind out a 30-24 victory over the Wolves Saturday night in the championship game of the 2020 East Central Oklahoma Classic.

The Cougars, ranked No. 6 in Class 4A, improved to 8-3 after the title win. The Ada boys have now won their own tournament 21 times, but Saturday was the first ECOC championship for the Cougars since 2001, when they defeated Atoka, Idabel and Lawton on consecutive nights.

“We knew it would be a tough tournament. We were happy with how tough it turned out to be,” said Ada head coach Garland Parks. “Coming in here, win or lose, we knew we were going to get better. It was a tremendous accomplishment.”

Both teams played good, physical defense, but what the Cougars did to an explosive Shawnee offense was special.

Ada limited Shawnee to just one field goal in the second half — a basket inside by reserve post player Joe Maytubby for his only points of the game with 6:57 to play in the fourth quarter that put Shawnee on top 23-21. The Wolves finished 1-of-14 (7.1%) from the field through the final two quarters.

Shawnee hit just 5-of-30 (16.7%) field goals for the game. The Wolves, which fell to 8-2 on the season, came into Saturday night’s game averaging 65.4 points per game in seven contests not played against Ada.

“I hate to say this out loud because I don’t want it to backfire on them, but we typically hold teams under their scoring average,” Parks said. “We really defend. I know that’s not the glamorous part of the game, but when the guys decide to really lock down, I feel like we can defend pretty well.”

The Cougars didn’t exactly light the scoreboard up, hitting just 9-of-30 shots (30%).

One of the biggest field goals of the game was a 24-foot 3-pointer from Jaxson Robinson that put Ada on top 24-23 at the 3:57 mark of the fourth quarter.

“Jaxson struggled some, but that was a big shot for us,” Parks said.

Shawnee’s J’Briell Easley tied the game with a free throw with 3:17 remaining, but the Wolves wouldn’t score again.

Robinson hit two free throws with 1:44 showing that put Ada on top 26-24. After Tanner Morris, Shawnee’s leading scorer at 11 points per game, missed a long 3-pointer, the Cougars were able to milk the clock down before Trey Havens was sent to the line with just 18.7 seconds left. He made both free throws to finally give Ada some breathing room at 28-24.

Morris — who scored just three points and was held without a field goal — missed another 3-pointer, and freshman Wyatt Brown added two more free throws for Ada with 4.5 seconds left to wrap up the scoring.

“They’re a tough team that makes you play hard offensively and defensively. We showed some mental and physical toughness down the stretch,” Parks said.

Robinson was named the East Central Oklahoma Classic MVP, while teammates Jake Shannon, Brown and David Johnson were named to the all-tournament team.

Kaden Cooper led the Ada offense with nine points and nine rebounds. He scored seven points during an 11-2 Ada surge to start the game, and his two free throws with 4:18 to play in the second period that put the hosts ahead 13-6 were his final points.

The game was tied at 15-15 by halftime and was again knotted at 21-21 heading to the fourth quarter.

“Wyatt played well the entire tournament. He makes us tougher. His selection for the all-tournament team was well-deserved,” Parks said.

Robinson added seven points, all in the second half. He also had six rebounds and two steals.

Ada is off until traveling to Seminole Friday night. That contest is expected to be the first contest played in Seminole’s new gymnasium.