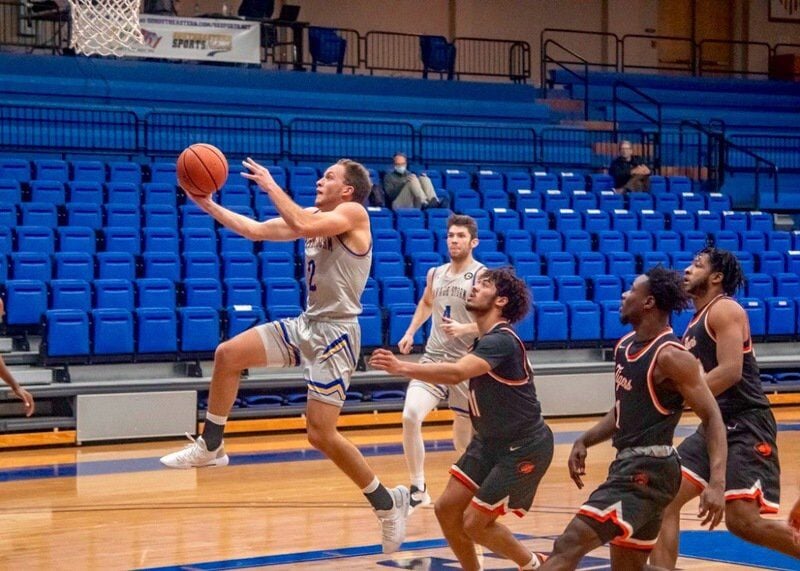 A trio of East Central players watch as Southeastern senior Adam Dworsky drives to the basket during their Great American Conference battle Monday night in Durant. 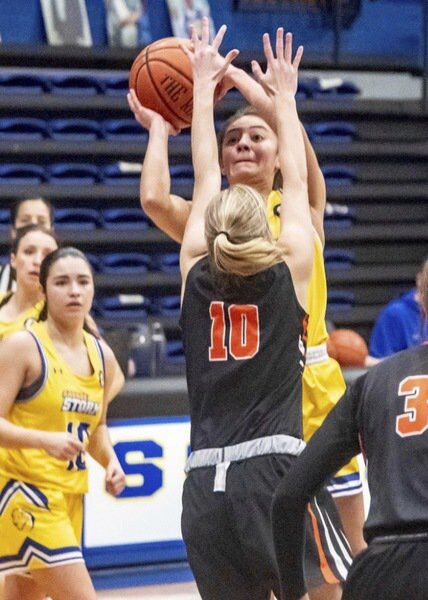 East Central’s Gabby Cummins (10), a sophomore from Elgin, applies defensive pressure to a Southeastern player during their Monday night matchup in Durant.

A trio of East Central players watch as Southeastern senior Adam Dworsky drives to the basket during their Great American Conference battle Monday night in Durant.

East Central’s Gabby Cummins (10), a sophomore from Elgin, applies defensive pressure to a Southeastern player during their Monday night matchup in Durant.

East Central, under the direction of head coach Matt Cole, improved to 1-1 on the year, while the Savage Storm fell to 1-2.

The turnover bug bit the Storm hard as the Tigers turned 20 miscues into a 31-2 edge in points off turnovers for the contest.

East Central outscored SOSU 23-7 in the second quarter — including a 14-0 run to end the period — to build a 35-22 halftime lead. The Tigers then outscored Southeastern 23-17 in the third quarter and watched their lead increase to 58-39.

SOSU was limited to 1-of-10 shooting in the fourth quarter as the Tigers outscored the hosts 15-8 in the final frame to fashion the final of 73-47.

East Central hit 8-of-20 3-pointers compared to a 3-of-10 showing for Southeastern. ECU also out-rebounded the Savage Storm 36-29. It was the largest victory over an SOSU team since the Tigers defeated Southeastern 81-68 on Feb. 27, 2014.

Southeastern had a pair of double-digit scorers as Jordan Benson finished with 13 points on 5-of-8 shooting, while Katie Branam added a 10-point effort on a 5-of-9 performance.

The Tigers are back in action Thursday at Oklahoma Baptist University in Shawnee.

DURANT — Southeastern star Adam Dworsky put together a career-high scoring night and flirted with a triple-double and Southeastern needed every bit of it to hold off rival East Central for an 87-83 victory on Monday night inside the Bloomer Sullivan Arena.

Southeastern notched its first win of the season, improving to 1-2 on the year while ECU left town with an identical 1-2 mark.

“We were fortunate,” said Southeastern head coach Kelly Green. “They were pretty much having their way with us. They were driving the ball at us in the paint. If they did miss they were getting an offensive rebound and a putback. We were back on our heels too much.”

Dworsky put together a career-high scoring effort with 38 points on a 13-of-25 effort from the field which included six 3-pointers.

He also wrapped up his second-straight double-double with 10 rebounds and nearly became the first SOSU player in 25 years to record a triple-double, finishing with seven assists.

He was not the only player with a double-double for the Storm as Vadim Clanet recorded his first career double-double with 13 points and 11 rebounds and was next in line in assists for SOSU with five.

The Tigers would finish the half on a 14-4 run to erase a Southeastern advantage and lead 45-40 at the halftime break.

The second half picked up where the first one ended as the Storm deficit would reach eight points early.

Southeastern seized the momentum with a pivotal 17-2 run to grab a 73-68 lead with just over six minutes remaining in the contest.

The Tigers would answer and knot the score at 73-73, but seven straight points would push SOSU out to an 80-73 lead with 2:19 remaining.

ECU would close the gap to one possession three times over the final two minutes, but each time it was Dworsky with an answer, including a pair of free throws with 10 seconds to play that sealed the outcome

Despite the loss, ECU won the battle of the boards 45-35.