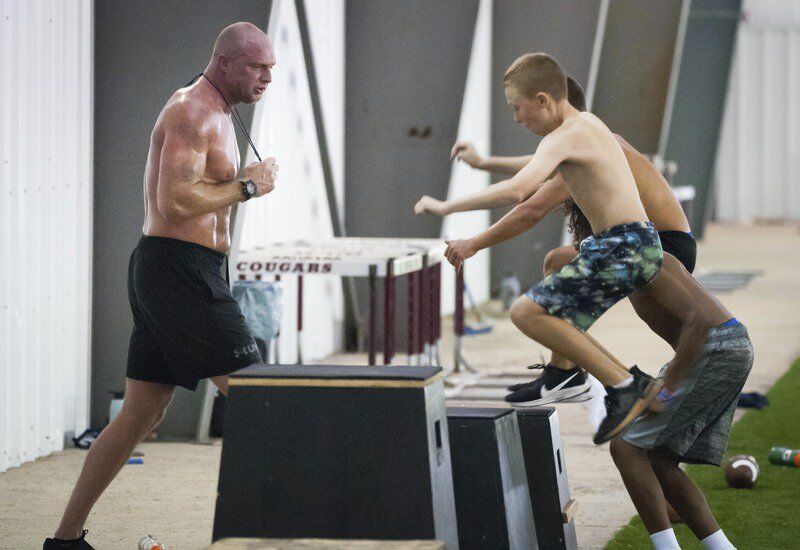 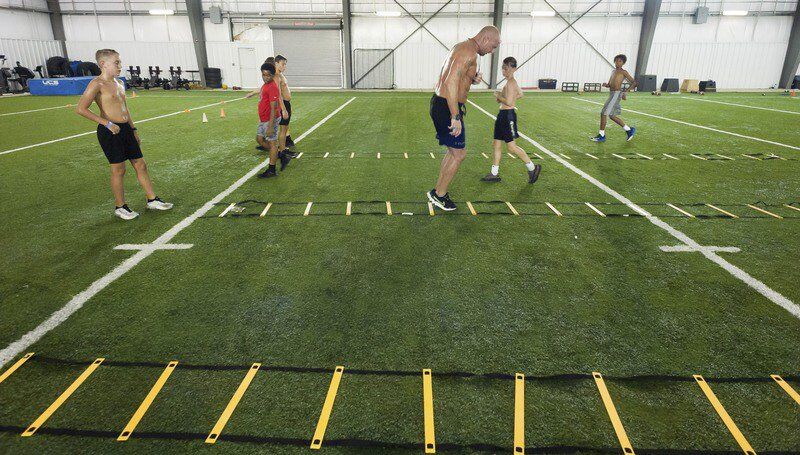 Coach Dan Coach demonstrates how to properly do a ladder drill to his Summer Pride athletes during a Tuesday morning workout inside the Dunham Indoor Facility. 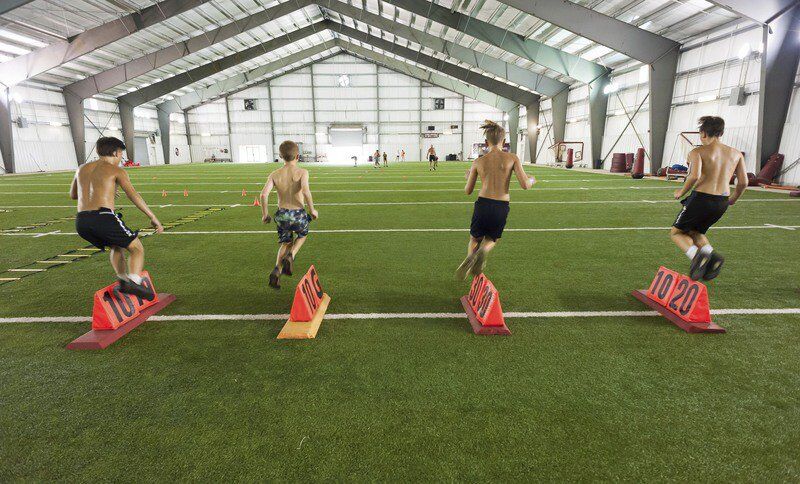 Participants in the Summer Pride program for Ada sixth and seventh graders jump back and forth over pylons during a drill Tuesday morning. 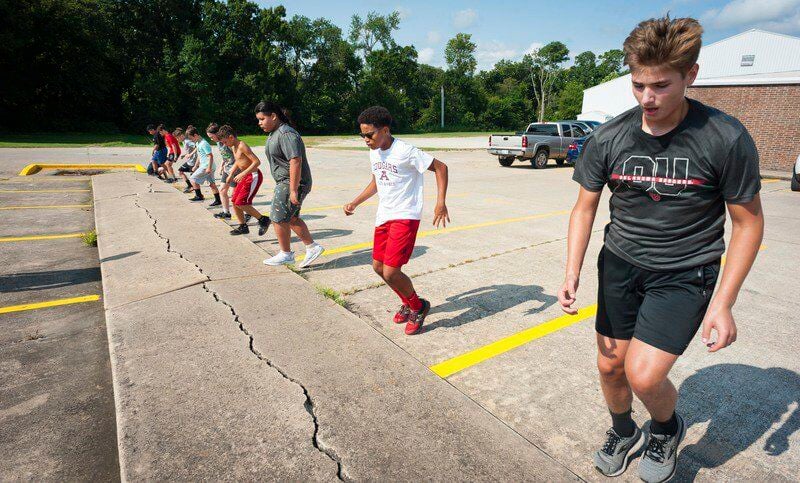 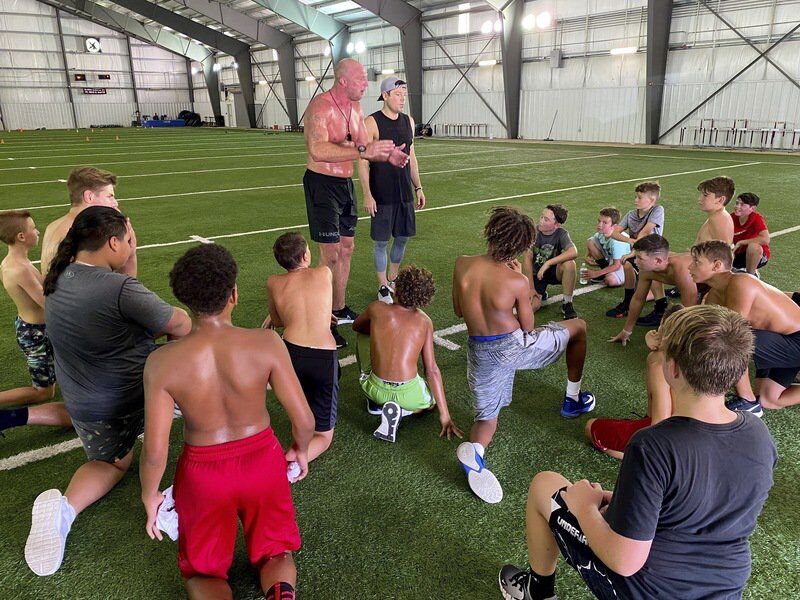 Coaches Dan Cody and Bo Walbrick meet with their sixth and seventh-grade Summer Pride athletes after their workouts Tuesday morning inside the Dunham Indoor Facility.

Coach Dan Coach demonstrates how to properly do a ladder drill to his Summer Pride athletes during a Tuesday morning workout inside the Dunham Indoor Facility.

Participants in the Summer Pride program for Ada sixth and seventh graders jump back and forth over pylons during a drill Tuesday morning.

Coaches Dan Cody and Bo Walbrick meet with their sixth and seventh-grade Summer Pride athletes after their workouts Tuesday morning inside the Dunham Indoor Facility.

The former Ada High School and University of Oklahoma football star was putting incoming sixth and seventh graders through an intense workout when The Ada News caught up with him in the Dunham Indoor Facility Tuesday morning.

Most of the drills Cody had his participants doing were to increase speed, agility, balance and stamina. And he had his kids working hard.

Cody is filling a niche that needed to be filled within Ada athletics. His Summer Pride workouts are Monday through Thursday from 9:30 to 10:30.

Before former Ada High football head coach left for Edmond, he contacted Cody to see if he would help with that particular age group of kids. He gladly volunteered his services. His Summer Pride partner is Bo Walbrick, who knows football. His father is longtime East Central University head coach Hank Walbrick.

“It didn’t dawn on me that they had never been doing this. For all the tradition here, you would think it would have been happening,” he said. “I was always impressed they had the tradition they did without having some sort of introductory deal before seventh grade. I know once they got to seventh grade it was a very serious deal.”

Cody said he was glad Berus called upon him to help out Ada athletics with this project.

“He was just trying to get something started. I love coach Berus and I appreciate him introducing me to this deal,” Cody said.

Cody said he had coached a number of his Summer Pride athletes in flag football. His son, Drake Cody, is also a participant. Drake will enter the sixth grade this fall.

Cody and Walbrick met one night in his garage to start planning their Summer Pride strategy.

“I told him that’s how Apple and Microsoft started out — in a garage,” he said.

“I had my big dry-erase board and had all this stuff drawn up. I don’t have a computer so I have to draw it out,” Cody explained. “He’s a great compliment to me because he digitalized everything we were talking about doing.”

Cody stressed that his Summer Pride program wasn’t just for future junior high and high school football players. He said his workouts will benefit athletes in all sports.

“This is open to all Ada students going into the sixth and seventh grade. It’s not sport-specific. Even though we are doing it in this indoor facility, the kids need to know no one has been asked or pressured to play football in any shape or form.”

Cody said he has a great group of Summer Pride athletes and they all seem to be buying into his tough training.

“They love it and we’re laying it on them. We have a lot of kids who have not missed any days outside of extenuating circumstances,” he said. “The core group — about 20 to 25 kids — have been fantastic. If we had everyone here that’s been here once come, we’d have about 40. But we hover around 20 to 30 each day.”

Cody believes every single attendee will leave a better athlete than when they first started Summer Pride.

“I hope they learn a little bit about how to train too,” he said. “I’m trying to get them to unlock Pandora’s box — to get them to realize what you thought were your limitations ... to forget that. That goes out the window. Forget limitations. Once they figure out to just let go, it’s a totally different ballgame.”

Cody said he’s not sure new head coach Brad O’Steen has any plans for him post-Summer Pride. But he’s open to the idea of helping the Cougars out where needed.

“I’m not sure if they’ll do anything during the school year, but I’m here to help,” he said. “This right here is a good place for me. I’m loving it.”