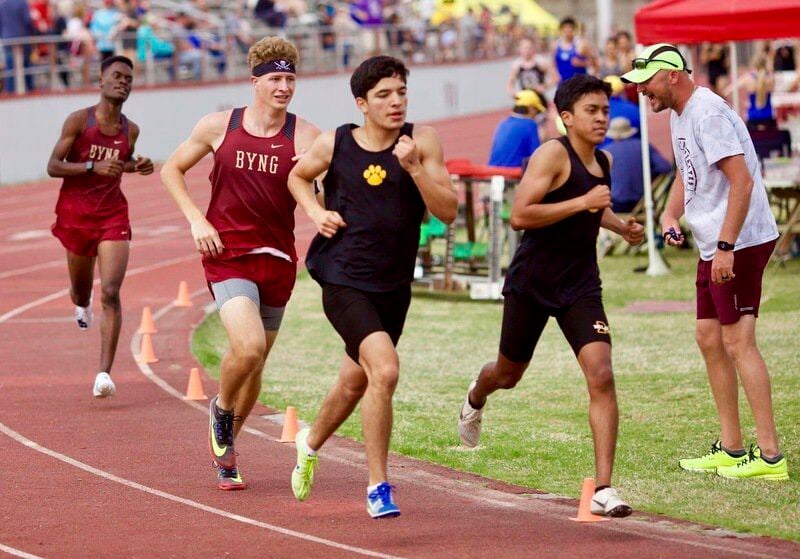 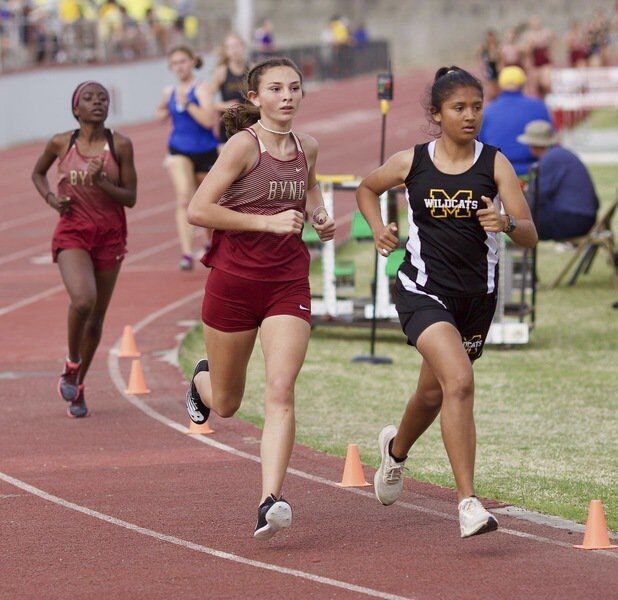 Byng freshman Cadence Carolos set the school record in the 1600 Meter Run with a time of 5:37.21 last weekend at the Rock Creek Invitational track meet in Sulphur.

Byng freshman Cadence Carolos set the school record in the 1600 Meter Run with a time of 5:37.21 last weekend at the Rock Creek Invitational track meet in Sulphur.

SULPHUR — It was a record-setting day for the Byng High School track team on April 10 at the Rock Creek Invitational in Sulphur.

“Rosie made her work for it,” said Byng track coach Josh Sawyer. “It was a great race, one of the best I’ve had the pleasure of coaching and watching at the same time.”

The Lady Pirates finished fifth in the team standings with 61 points. Tuttle won the team title with 172 points, followed by Dickson at 82, Madill at 78 and Sulphur at 65. There were 15 teams entered.

The Byng boys team finished 10th in the team standings with 24 points. Kingston won the team title with 133 points followed by Millwood at 93 and Sulphur at 58.25.

Lawrence Coleman also had a Top 10 finish, crossing the finish line in eighth at 11:30.28.

“I’ve said it before and I’ll say it again. I’ve got great groups of kids on these teams,” Sawyer said. “I believe I have the hardest-working, most competitive, and most mentally tough kids on campus. This meet just reminded me how tough and how great these kids are and how lucky I am to have them on my team.”

PLANO [ndash] John James Fleet II, passed away on Aug. 2, 2021, age 81, in Plano, Texas. He showed great courage and faced his final days in the loving company of his family. John was born in Houston, Texas, raised in Dallas, lived in Ada, Oklahoma, and Plano, Texas. John married Geraldine C…