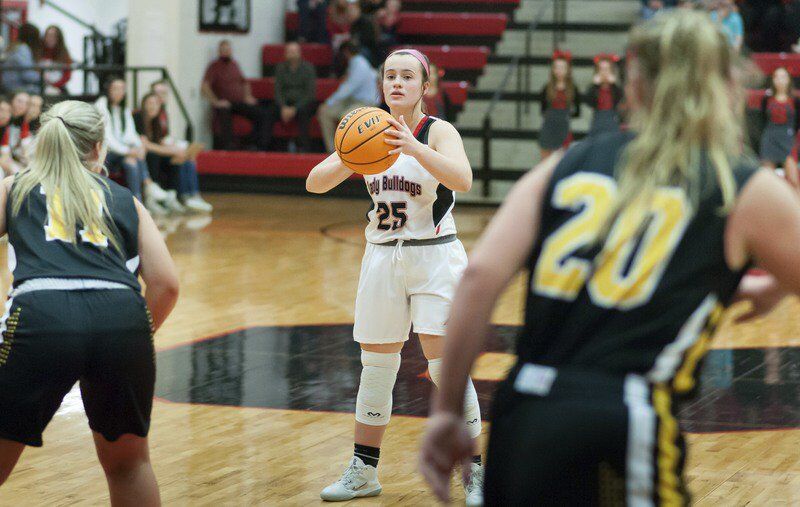 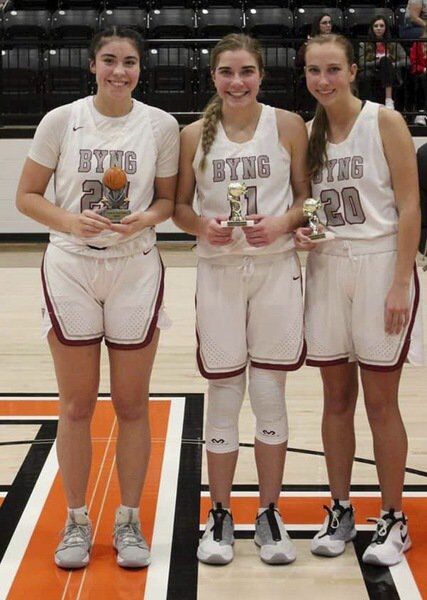 From left to right, Byng’s Kennedy Large was named the MVP of the 2021 Charles K. Heatly Invitational, while teammates Deesa Neely and Trenity Miller were part of the all-tournament team. 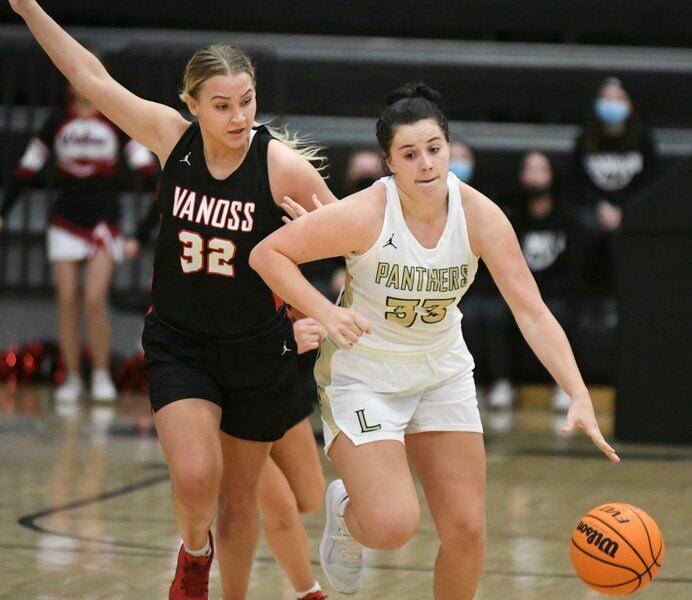 Carson Dean (33) of Latta finished with 16 points and eight rebounds to help the Lady Panthers defeat Broken Bow 54-34 Saturday in the third-place game of the 2021 Kingston New Years Classic. 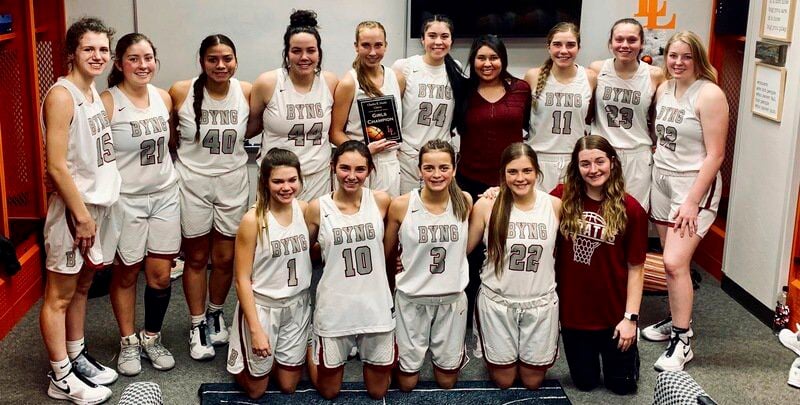 From left to right, Byng’s Kennedy Large was named the MVP of the 2021 Charles K. Heatly Invitational, while teammates Deesa Neely and Trenity Miller were part of the all-tournament team.

Carson Dean (33) of Latta finished with 16 points and eight rebounds to help the Lady Panthers defeat Broken Bow 54-34 Saturday in the third-place game of the 2021 Kingston New Years Classic.

LINDSAY — The Byng Lady Pirates left the 2021 Charles K. Heatly Invitational as the tournament champions and they certainly looked the part during Saturday night’s title contest against Sulphur.

The Lady Pirates took control early and never looked back, blitzing the Lady Bulldogs 53-35 in a game that wasn’t as close as the final score might indicate.

Coach Trent Miller’s team is now 4-1 after its run to the title — the only loss an overtime setback to old rival Latta, a contender in Class 2A.

Byng opened the game with a 17-5 first-quarter run and then outscored Sulphur 20-10 in the second period to extend its lead to 37-15 by halftime. Byng used a 12-3 volley in the third quarter that made it 49-18 heading into the final eight minutes.

Large was named the Most Valuable Player of the Charles K. Heatly Invitational, while both Neely and Trenity Miller were part of the all-tournament team.

Byng hosts Comanche, ranked No. 20 in Class 3A, tonight. The Lady Pirates defeated Comanche 39-32 in the semifinals at Lindsay.

KINGSTON — The Latta Lady Panthers bounced back from a disappointing loss to Dale and defeated Broken Bow 54-34 Saturday in the third-place game at the 2021 Kingston New Years Classic.

Dale, ranked No. 2 in Class 2A, handed the Lady Panthers a 45-32 loss in a Friday semifinal contest.

Latta trailed 7-6 after one quarter but outscored Broken Bow 38-18 over the middle to quarters to take control.

“We play really well in the second and third quarters,” said Latta head coach Bruce Plunk. “Our defense was locked in and they struggled to get good shots.”

Carson Dean led the LHS offense with 16 points, including a pair of 3-pointers. She also hauled in eight rebounds.

“Brooklyn came off the bench with a lot of energy,” Plunk said.

Latta held a slim 11-10 lead after the first quarter, but Dale responded with a 14-5 run in the second frame to surge to a 24-16 halftime advantage.

The Lady Pirates outscored Latta 12-7 in the third quarter to stretch their lead to 36-23 heading into the fourth period.

“We have to be better against their pressure,” Plunk said. “We also need to be more patient on offense. When we reversed the ball from side to side, we got good looks.”

Caitlyn Byrd finished 4-of-8 from 3-point territory for all 12 of her points to pace the LHS offense. Carson Dean scored seven points and had nine rebounds. Taryn Batterton was next with six points and five boards.

Things don’t get any easier for Latta. Plunk’s squad travel to Silo tonight for a matchup with the Lady Rebels (9-1), ranked No. 1 in Class 2A.

ALEX — The Stratford Lady Bulldogs got a game-high 28 points from Jaedyn Getman — including 11 in a pivotal third quarter — and turned back Ninnekah 48-45 Saturday in the finals of the 2021 Alex Longhorn Classic.

Ninnekah led 24-19 at halftime before Stratford used a 20-12 run in the third period to grab a 39-36 lead. Lundyn Anderson buried a half-court heave at the third-quarter buzzer to snap a 36-all tie. It was Anderson’s only basket of the game.

Both teams scored nine points in the fourth period.

Abbi Phelps hit three 3-point shots and added 13 points for the Lady Bulldogs. Getman scored 11 of her points in the big third period.

Jayah Rodriguez led the Lady Owls with 20 points, including four 3-point baskets. Anastasia Guevara added 12 points and Kameron Crutchfield added nine points — all in the second half — including a 6-of-6 showing from the free-throw line.

Dibble is at Stratford tonight.