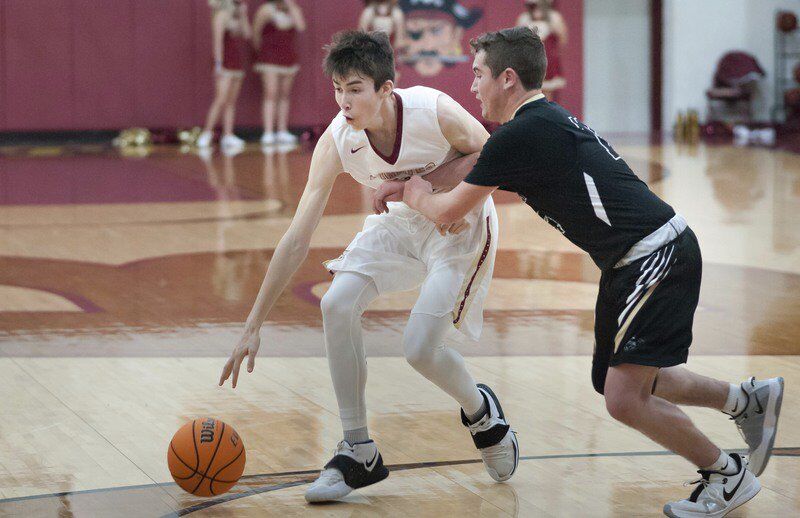 Byng’s Carter Colombe scored 17 points to help the Pirates surge past Lone Grove 48-31 Thursday in the first round of the Charles K. Heatly Invitational Tournament in Lindsay. 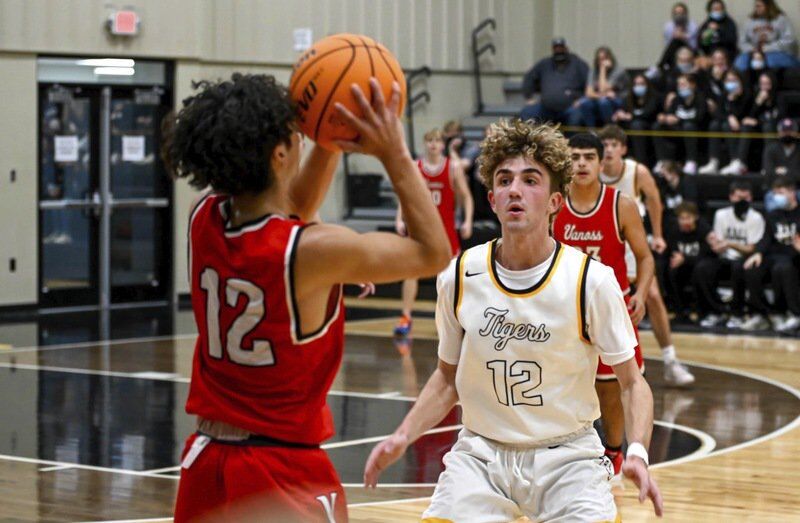 Roff’s Wil Joplin scored a team-high 18 points in the Tigers’ 79-17 win over the Dickson JV Thursday in the first round of the Arbuckle Winter Classic in Davis.

Byng’s Carter Colombe scored 17 points to help the Pirates surge past Lone Grove 48-31 Thursday in the first round of the Charles K. Heatly Invitational Tournament in Lindsay.

Roff’s Wil Joplin scored a team-high 18 points in the Tigers’ 79-17 win over the Dickson JV Thursday in the first round of the Arbuckle Winter Classic in Davis.

LINDSAY — The Byng Pirates finished the game with a huge fourth quarter and stormed past Lone Grove 48-31 in the first round of the 2021 Charles K. Heatly Invitational Tournament Thursday afternoon in Lindsay.

The Pirates improved to 5-1 under new head coach Zack Samaha, while Lone Grove lost for the first time and dropped to 3-1.

“It was a physical game throughout. I thought we started the game off well and finished even better,” Samaha said. “We must be able to control the middle quarters of a game and not have the lapses in execution like we did today. We are on the winning side of the bracket and our tournament goal remains the same — win a minimum of two games.”

Byng was scheduled to meet Pauls Valley in a semifinal game on Friday. Today’s third-place game is scheduled for 3 p.m. with the title contest slated for 7 p.m.

Carter Columbe led the Byng offense with 17 points, including three 3-point baskets. Parker Presley followed with 13, and Cade Azlin, who sank a pair of triples, finished with eight.

Andy Dunham, who hit three 3-pointers, led the Lone Grove offense with 13 points but no other Longhorn player scored more than five.

ALEX — The Stratford Bulldogs held Ninnekah to just three second-quarter points and rolled to a 48-30 win over the Owls Thursday at the 2020 Longhorn Classic in Alex.

Stratford improved to 5-2 on the year, while Ninnekah dropped to 4-5.

“We played a very efficient game offensively. It was the most patient we have been all year,” said Stratford head coach Ray Ardery.

Stratford led just 14-10 after one period but used a 12-3 run in the second quarter to go on top 26-13 at halftime. The Bulldogs steadily pulled away from there.

Brisyn Markovich scored a game-high 24 points to lead the way for Stratford, while Payton Wood knocked down a pair of 3-pointers and scored 14.

Stratford was set to meet Mountain View-Gotebo in a Friday night semifinal matchup.

DAVIS — The Roff High School boys made short work of Dickson’s junior varsity team, blasting the Comets 79-17 in the first round of the Arbuckle Winter Classic Thursday in Davis.

Wil Joplin sank four 3-pointers and finished with a game-high 18 points for the Tigers, while Tallen Bagwell followed with 14. Coby Simon hit a trio of triples and scored 13 for Roff and both Trayson Miller and Conner Owens added 11 points in the balanced RHS offense.

The Tigers were scheduled to meet the host Davis Wolves in a Friday semifinal affair.