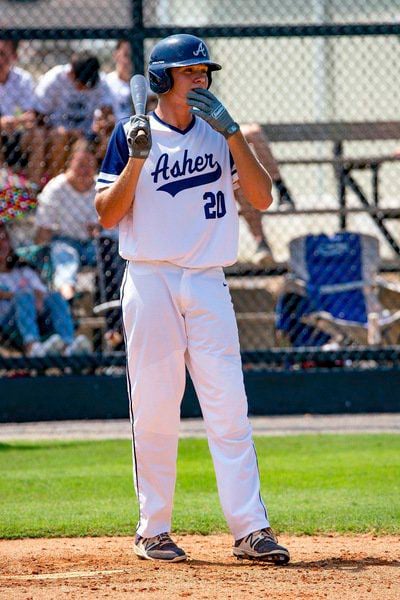 Asher senior Patch Hamilton was named the 2020 Region 6 Male Athlete of the Year by coaches and athletic directors all across southeastern Oklahoma. 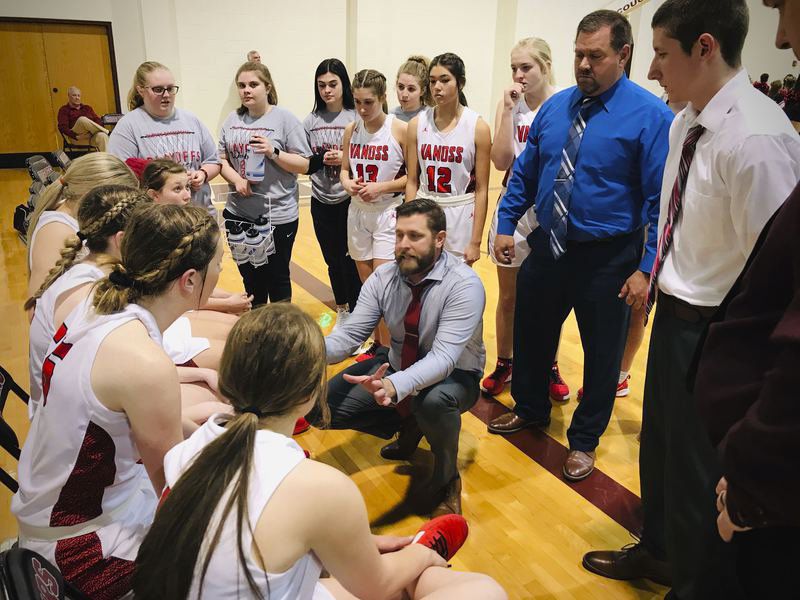 Vanoss head coach Jonathon Hurt talks to the Lady Wolves during the Class 4A Area Tournament at Ada High School. Hurt was named the 2020 Region 6 Girls Basketball Coach of the Year. 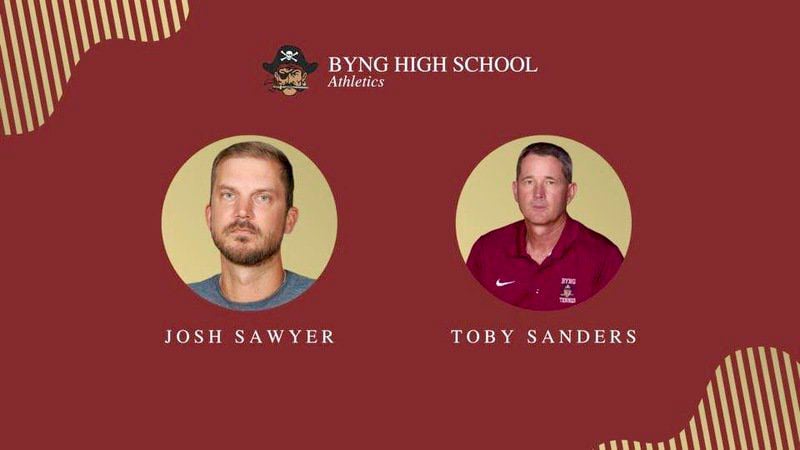 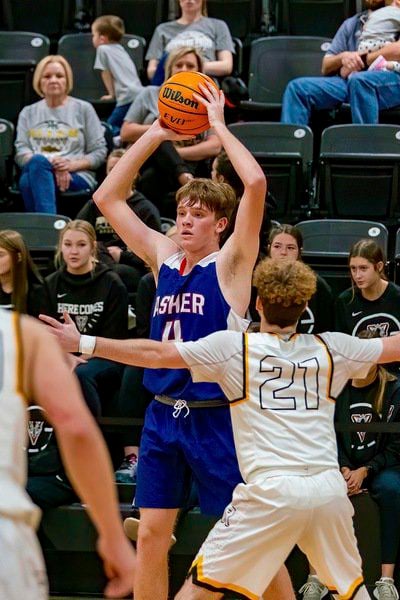 Two-sport Asher senior Patch Hamilton (4) was named the 2020 Region 6 Male Athlete of the Year by coaches and athletic directors all across southeastern Oklahoma.

Asher senior Patch Hamilton was named the 2020 Region 6 Male Athlete of the Year by coaches and athletic directors all across southeastern Oklahoma.

Vanoss head coach Jonathon Hurt talks to the Lady Wolves during the Class 4A Area Tournament at Ada High School. Hurt was named the 2020 Region 6 Girls Basketball Coach of the Year.

Two-sport Asher senior Patch Hamilton (4) was named the 2020 Region 6 Male Athlete of the Year by coaches and athletic directors all across southeastern Oklahoma.

Two-sport Asher standout Patch Hamilton has been named the 2020 Region 6 Male Athlete of the Year.

The prestigious honor was the result of voting by coaches and athletic directors at every school located in Region 6 that makes up the southeast corner of Oklahoma. The state is divided up into six different regions by the Oklahoma Coaches Association.

The region is made up of Pottawatomie, Pontotoc, Johnston and Marshall counties along its eastern border and every county in between to the southeastern edge of the state. There are 97 schools in Region 6, including McLoud and Dale in the northwest part of the region and Idabel and Haworth in the far southeast part of the region. Schools included in The Ada News’ coverage area are Ada, Allen, Asher, Byng, Calvin, Coalgate, Konawa, Latta, Roff, Stonewall, Tupelo and Vanoss.

Male Athlete of the Year

Hamilton excelled for the Indians in baseball and basketball. The 6-5 senior was a dunking machine while playing forward on the Asher boys basketball team and a power hitter and center fielder for the Asher baseball team.

Hamilton was coached in both sports by his father, Scott Hamilton.

“We are amazed by this award for Patch,” Scott Hamilton said. “Some of the most tradition-rich athletic programs reside here in southeast Oklahoma. So, it is a huge honor to have a player named as the Male Athlete of the Year. As both coach and dad, the greatest feeling is knowing this was selected by the coaches and athletic directors of all those schools in this part of the state.”

During his senior fall baseball season, Hamilton hit .438 with nine home runs, 14 doubles and 42 RBIs. During Asher’s 2019-20 basketball season, he averaged 17 points and 11.3 rebounds per game. Hamilton helped lead Asher to back-to-back area tournament appearances. He scored over 1,600 points during his varsity career.

“Patch is a very talented player in both baseball and basketball. I realized last year that most high school coaches go a lifetime without ever getting to coach a kid that can do the things he can do on the court and the field,” Scott Hamilton said. “I count myself fortunate to have had two years as his coach.”

Patch Hamilton has signed a letter of intent to play baseball at Rose State College in Midwest City.

Track Coach of the Year

Sawyer, while appreciative of the award, hates the fact that his Pirate team — particularly his seniors — had their 2020 track season yanked out from under them due to the new coronavirus pandemic.

“I am honored to receive this award. I just wish we would have been able to have a complete season this year for my seniors,” Sawyer said. “They have worked extremely hard their entire careers here at Byng to help build up our program, and for their final season to end the way it did is heartbreaking.”

The BHS track squad got one meet under its belt — the 2020 Bethany Twilight Invitational on March 10 — before the Oklahoma Secondary School Activities Association canceled spring sports seasons. Sanders said senior Fisher Bailey and sophomore Harley Cobb each set personal best times in the 3200 Meter Run at that event.

“We had multiple other athletes get within a couple of seconds of their personal best times,” Sawyer added. “Deesa Neely, who only had about a week of training under her after coming to us from basketball, was already running times she was running at the end of the 2019 track season.”

Junior A.J. Gustin, who missed the entire 2019 track season with a knee injury, now has back-to-back seasons wiped out.

“We were looking to have a great track season, it just breaks my heart to see their season end this way. We have a great bunch of kids in this program, and I wouldn’t have received this award if it wasn’t for each and every one of them,” Sawyer said.

“To my seniors (Bailey, Johnathon Delfrate, Chloe Griffith and Lane Tusek), we are going to miss you all tremendously next year. I know you all are going to go on and do great things in life. Once a Pirate, always a Pirate,” he said.

Sawyer said he is looking forward to him and his team getting back to work full time.

“I’m looking forward to next year and hopefully, we can finish some business we left unfulfilled from this year,” he said. “I know these kids are very resilient and hard-working. The majority of them are still training right now. They are hungry, and we can’t wait to get back to competing, hopefully soon.”

Tennis Coach of the Year

Not only was Sanders named 2020 Region 6 Tennis Coach of the year, he was also selected as the Region 6 All-State Tennis Coach.

“I was surprised, honored and humbled to receive the award. I see it as more of a Byng tennis program award than an individual award,” he said. “I was blessed to be coaching at an established program that coach Alan Simpson had built up for many years. Coach Simpson was a great mentor to me during my first year of coaching.”

The Byng boys tennis team finished fifth at the Class 4A State Tennis Tournament in 2019 and was fourth at the Ardmore Tournament earlier this spring.

The Byng Lady Pirates finished third at the state tournament in 2019.

“My first class had a lot of experience competing and worked really hard so that we could be successful as a team,” Sanders said. “I had the advantage of watching them for three years while coach Chris Burns was doing a great job with them. I also was blessed to have friends like Bill Nelson who was always willing to help, as well as others in the tennis community who are too numerous to mention.”

Girls Basketball Coach of the Year

Hurt had his Vanoss girls squad ranked No. 1 in Class 2A with a 26-2 overall record. The Lady Wolves had qualified for the state tournament before that event was canceled due to the COVID-19 crisis.

“I’m lucky to be surrounded by great assistants that deserve a lot of recognition as well,” Hurt said. “This is a reflection of the kids in our program. They have allowed us to coach them and have worked extremely hard to sustain success. Also, very grateful my administration gave me an opportunity to coach girls basketball. Most people never would have with my tough-love approach.”

Coach of the Year Awards

Athletes of the Year