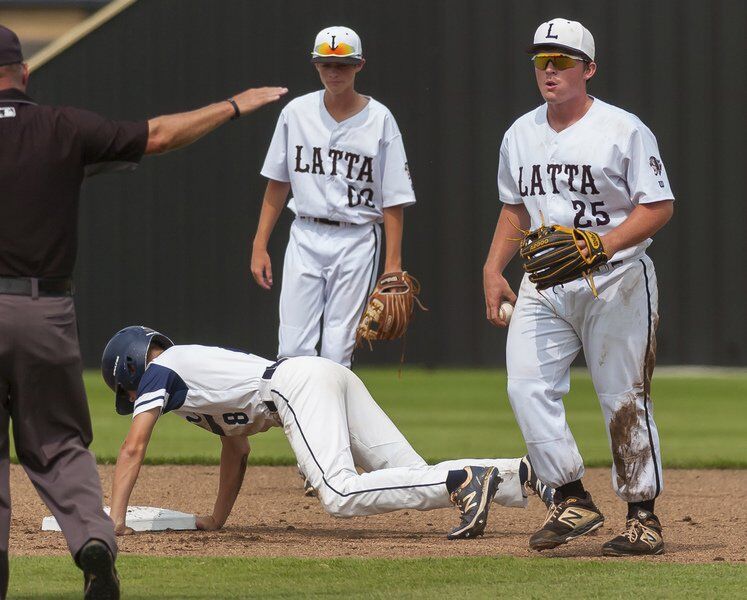 Asher’s Trace King (8) is safe at second while Latta players Tucker Abney (25) and Nik Schroeder (00) look toward the umpire during a matchup Saturday at Panther Park. 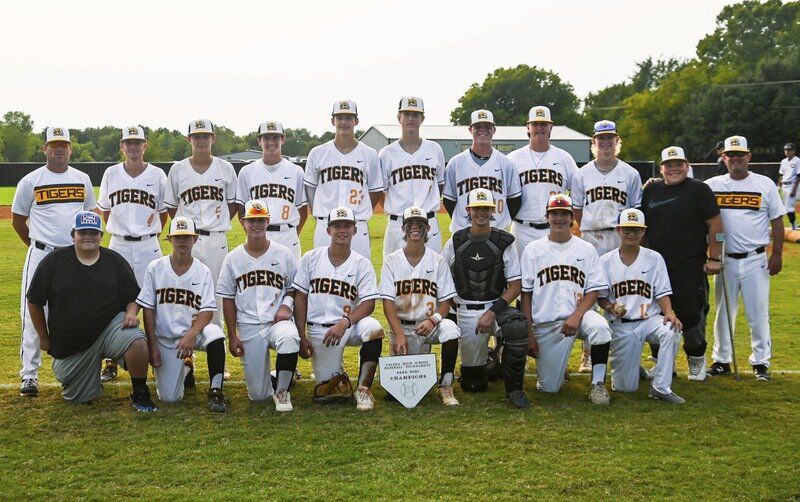 The Roff High School baseball team captured first place at the Calera Tournament over the weekend. The Tigers upended the host Bulldogs 12-2 in Saturday’s title game. 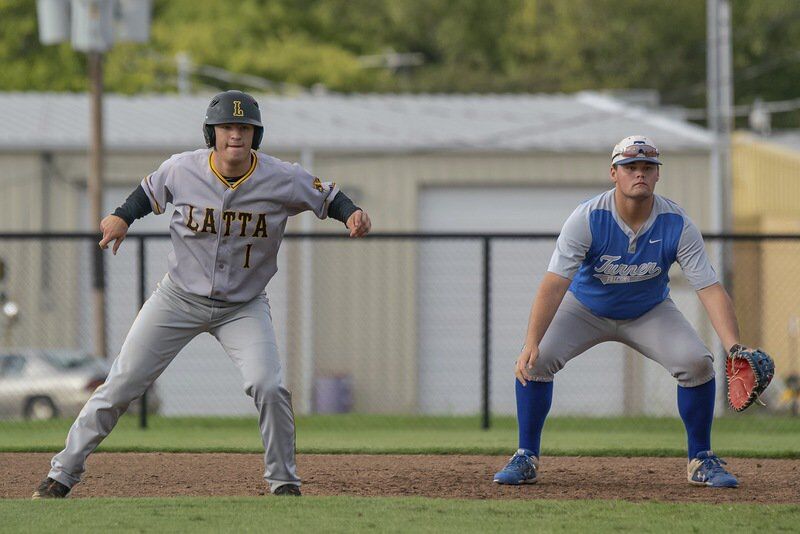 Asher’s Trace King (8) is safe at second while Latta players Tucker Abney (25) and Nik Schroeder (00) look toward the umpire during a matchup Saturday at Panther Park.

The Roff High School baseball team captured first place at the Calera Tournament over the weekend. The Tigers upended the host Bulldogs 12-2 in Saturday’s title game.

LATTA — The Asher Indians turned back Latta’s seventh-inning comeback attempt and held off the Panthers 7-6 Saturday afternoon at Panther Park.

The Panthers trailed 8-5 heading into the bottom of the seventh before trying to rally.

Jackson Presley reached on an error to start things off and the Panthers loaded the bases on a base hit by Tucker Abney and a walk to DJ Van Atten.

Both Cooper Hamilton and Justin Kiker hit into fielder’s choices to drive in two Latta runs that made it a one-point game. JT Gray then reached on another AHS error, putting runners at first and second but Kale Williams grounded out to end the game.

Asher compiled nine hits in the seven-inning contest with Bryson Martin leading the way. He finished a perfect 4-for-4 with two doubles, an RBI and three runs scored. Mike McDonald went 2-for-4 with a double, an RBI and two runs scored, while Cameron Grissom drove in a pair of runs for the Indians.

Abney had two of six Latta hits in the game. He finished 2-for-3 with an RBI and two runs scored. JT Gray drove in two runs. Gehrig Strong went 1-for-2 with a walk and a run scored.

McDonald earned the mound win for Asher. He struck out one, walked two and allowed one earned run in four innings of relief. DJ Van Atten was tagged with the loss. He tossed two innings with three strikeouts and three walks and allowed just two earned runs.

CALERA — The Roff Tigers got 10 hits from eight different players and rolled past host Calera 12-2 in four innings in the finals of the Calera Tournament Saturday evening.

Cade Baldridge finished 2-for-3 with a double, an RBI and three runs scored from the top of the Roff lineup, while Drew Sheppard went 2-for-3 with two RBIs and a run scored.

Kaden Huddleston led the Bulldogs, going 2-for-2 with a double and two RBIs.

LATTA — The Latta Panthers snapped a 2-2 tie with seven runs in the bottom of the sixth inning to finally pull away from Turner for a 9-3 win in the first game of a doubleheader Friday night at Panther Park.

Latta got off to a much quicker start in Game 2, grounding the Falcons 15-0 in two-and-half innings.

The was career wins No. 2,115 and 2,116 for Latta head coach Eddie Collins, who now holds the nation and state record for all-time victories. Collins passed legendary coach Murl Bowen of Asher to achieve the feat.

The Panthers may have been pressing a bit at times in the contest due to their coach being near to the record. Latta left 13 runners on base for the game and 12 through the first five frames.

Van Atten led a six-hit LHS offense, going 4-for-5 with his triple, a double, two RBIs and two runs scored. Lane Wood finished 1-for-2 and drove in two runs, while JT Gray walked twice and had two RBI.

Turner’s Tyler Campbell launched a two-run homer in the top of the fourth inning that tied the game at 2-2.

Gray, Latta’s starting pitcher, struck out nine, walked two and gave up two earned runs in five innings. Tucker Abney was solid in relief for the Panthers. He struck out three, walked one and didn’t allow a hit or run in 1.1 innings of work to earn the mound win in relief.

Latta took advantage of some Turner wildness on the mound and scored nine runs in the bottom of the first inning in the victory.

TUSHKA — Tupelo scored five runs in the top of the first inning before the offense stalled in a 13-6 loss to Tushka Saturday afternoon at the Silo Tournament.

Harley Davidson had an RBI double for Tupelo, while Colton Bourland, Taecyn Meek and Ty Bourland also drove in runs for Tupelo.