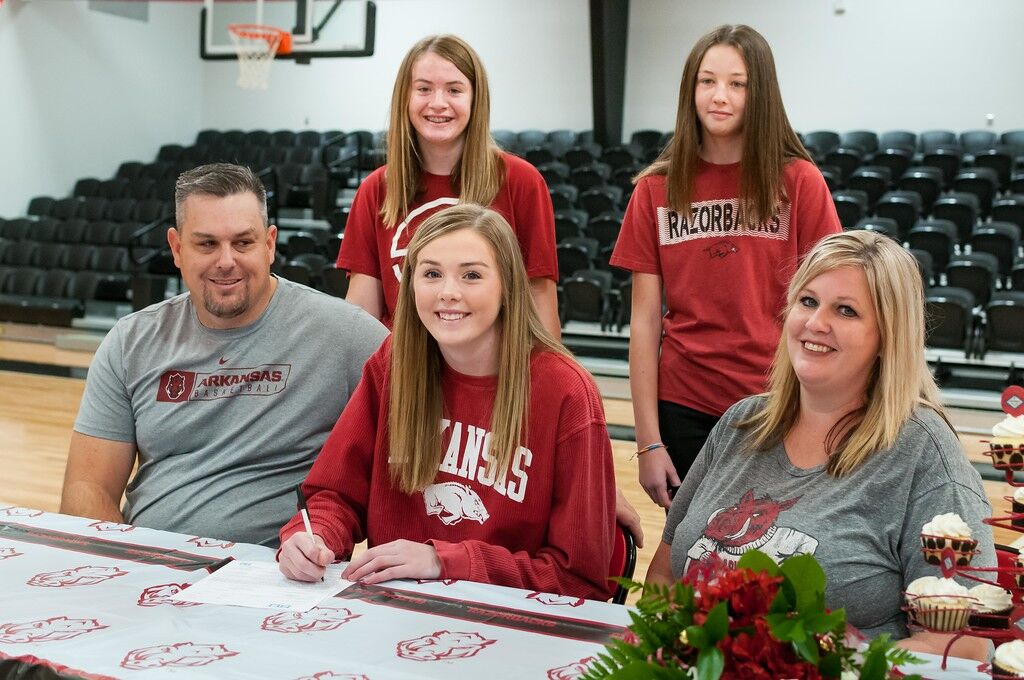 Emrie Ellis of Vanoss signs her letter of intent to play college basketball for the University of Arkansas during a ceremony Thursday morning inside the Kenneth D. Smith Memorial Fieldhouse. Pictured with Ellis are her parents Randy Ellis and Catherine Ellis and sisters Avery Ellis and Libby Ellis. 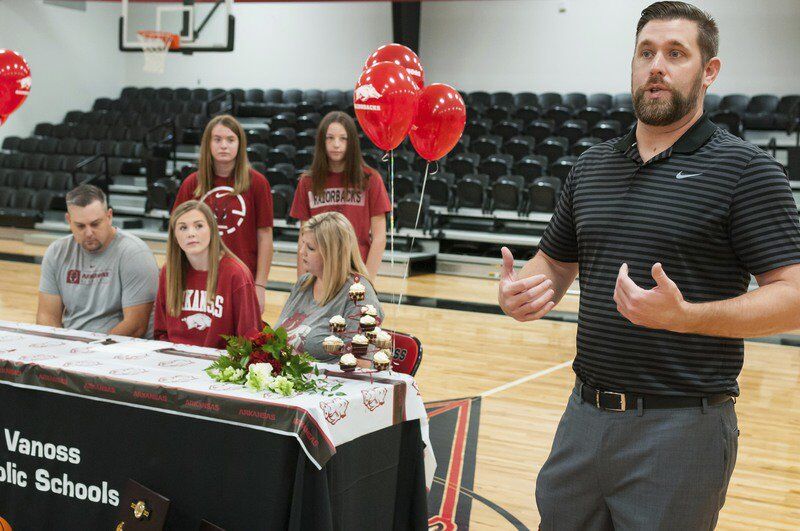 Richard R. Barron | The Ada NewsVanoss head coach Jonathon Hurt talks to those present at the signing ceremony for Emrie Ellis Thursday morning. Ellis signed with the University of Arkansas. 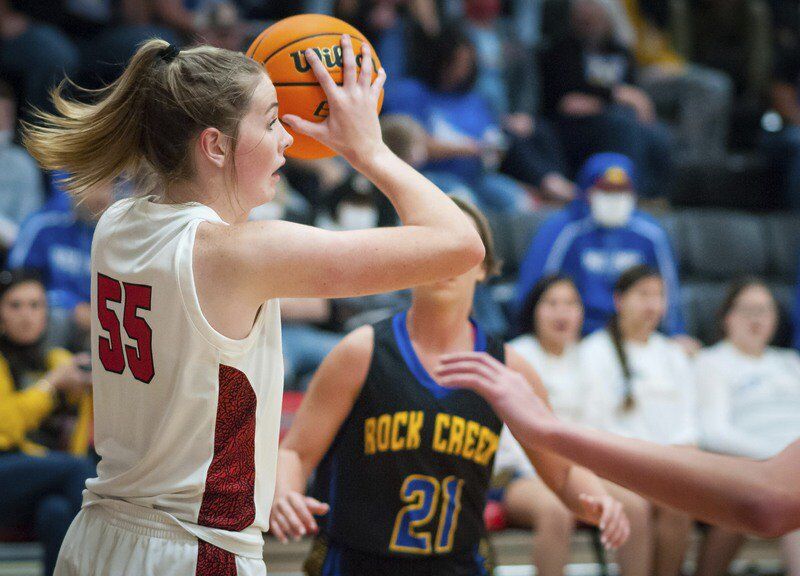 Vanoss senior Emrie Ellis looks for an open teammate during her team’s season-opener against Rock Creek. 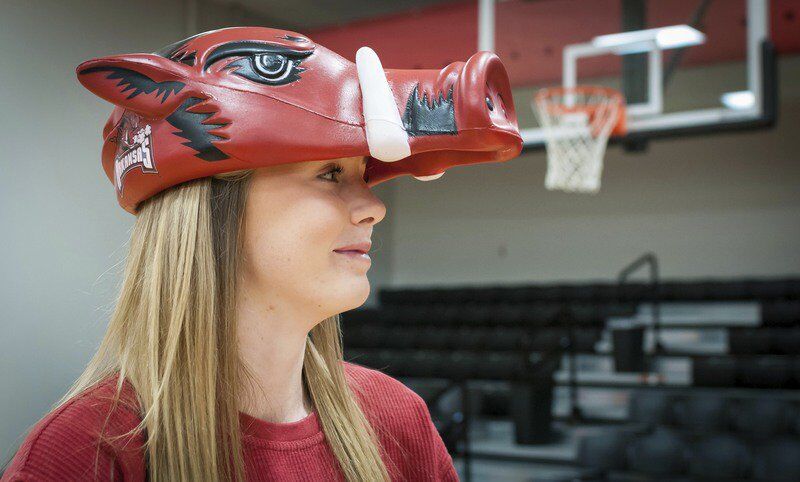 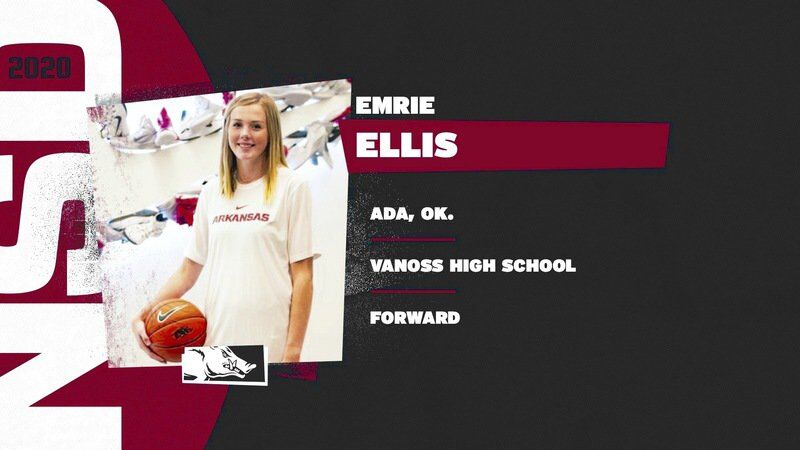 Emrie Ellis of Vanoss signs her letter of intent to play college basketball for the University of Arkansas during a ceremony Thursday morning inside the Kenneth D. Smith Memorial Fieldhouse. Pictured with Ellis are her parents Randy Ellis and Catherine Ellis and sisters Avery Ellis and Libby Ellis.

Richard R. Barron | The Ada NewsVanoss head coach Jonathon Hurt talks to those present at the signing ceremony for Emrie Ellis Thursday morning. Ellis signed with the University of Arkansas.

Vanoss senior Emrie Ellis looks for an open teammate during her team’s season-opener against Rock Creek.

It seems like forever ago when Vanoss senior Emrie Ellis gave her verbal commitment to the University of Arkansas.

It was in 2018, during the middle of her sophomore year of basketball when The Ada News reported that Ellis was headed to the Southeastern Conference school upon graduation. She made it official Thursday morning inside the Vanoss Activity Center when she signed a letter of intent to join the Razorbacks’ women’s basketball squad.

“It’s going to be a great fit for Emrie. I couldn’t be happier for her,” said Vanoss head coach Jonathon Hurt. “She has a huge opportunity in front of her.”

Arkansas women’s coach Mike Neighbor’s shared the story of how Ellis became on his recruiting radar as a lanky freshman. That story, entitled “The Rumors Were Wrong — She’s Even Better Than We Thought” follows.

“Rumors are traditionally associated with negative things. Growing up in a small town, that had certainly been my experience. Someone at church would hear details of something that happened the night before, and that story would be retold by someone at the store to someone else at the Pizza Barn that night. By Monday at school? It was all over. Well, this rumor ends up with a future Razorback rather than a viral story.”

“Lacey Goldwire, our former recruiting coordinator, began hearing tidbits of a 6-3 shot-blocking machine in southeastern Oklahoma near where she had attended college (Goldwire played college basketball at East Central University). Former classmates of hers at East Central were telling tales of a walking triple-double who was also blocking 20 shots a game. Rumor had it coaches of the region’s top programs were charting a course to Vanoss High School to see coach Jon Hurts’ prospect.”

“Luckily for us, Hurt was one of Lacey’s classmates. Lacey set a September date to evaluate this now somewhat mythical prospect on our recruiting board. We use the term ‘mythical’ because, in 2019, it is unprecedented for a 6-3, extremely skilled, great student with a great family to be an unknown. How could a player like that be a mystery to evaluators across the country? Well, it turns out she had broken her wrist exactly three minutes into her first summer game entering her freshman summer, and she chose not to play the summer after that. Could we really be this lucky?”

“Dreams of a future Hog shot-blocker sank. Then, a second message: ‘She’s even better than everyone said.’ That second text led to a visit to campus for a football game with her family and friends. Our luck continued – her family loved the Razorbacks, and she even drove a Razorback red car. Before they left, she had a full-ride offer. Two months later, while attending the Arizona State game in Bud Walton Arena, Emrie committed.”

Hurt remembers that day in the tiny practice gymnasium at Vanoss all too well.

“Knowing Lacey I knew Emrie would really like her. I was just hoping Arkansas would like Emrie,” he said. “The best part about this is at the time they came to watch we were in a PE gym that’s maybe half the size of a small high school gym. (The Vanoss Activity Center was being renovated.) We had both (girls and boys) teams in there, so after a few drills we let the girls scrimmage the boys.”

The atmosphere wasn’t exactly what coaches from Division I schools are probably used to.

“I’m sure the setting was a lot different than what most Power 5 assistants were used to. But Lacey was impressed,” Hurt recalled. “They let me tag along to Arkansas with them. Coach Neighbors is the most down to earth guy you could ever be around. That is appealing to people like Catherine and Randy (Emrie’s parents). The girls thought Lacey was awesome.”

Ellis averaged 17 points and 8.8 rebounds per game and shot 49.4% from the field — including 41.3% from 3-point range — as a junior. Those numbers would be even better if Ellis didn’t have such good players around her at Vanoss.

“People always ask me ‘Do you really think she is good enough (to play Division I basketball)?’ Yes, she is. If she didn’t commit so early she would’ve had a laundry list of offers from the best teams in the nation,” Hurt said.

“It’s easy to look at her points or stats at times and question her. The fact of the matter is, she always does what is best for her team,” he continued. “Sometimes we ask her to do things to make our team better that take away from her strengths as a player. That’s part of what makes her a special player though. She has the ability to make everyone around her better.”

Hurt said she’ll be in good hands with Neighbors and company.

“She gets to play for one of the best coaches there is and be a part of a program that will be one of the best in the nation,” he said. “Arkansas is getting a great player, teammate, and an even better person.”

Note: Mario Bravante of the University of Arkansas Communications Department contributed to this report.