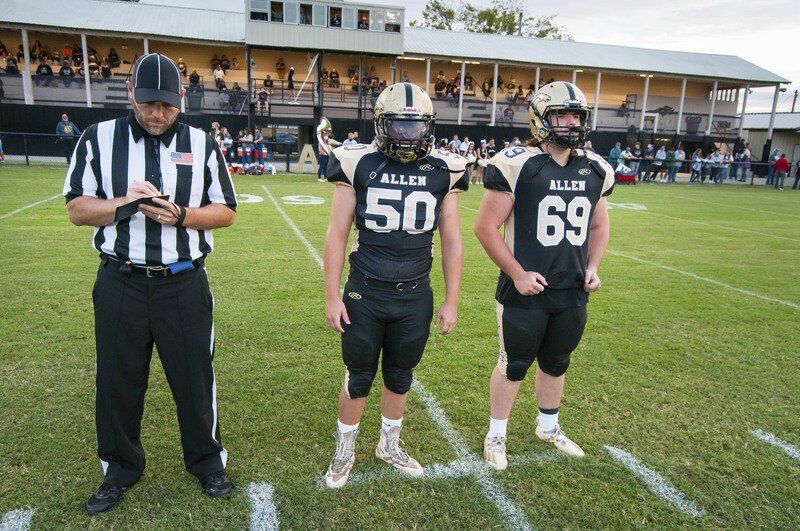 Allen’s Gage Husband (50) and Clayton Shackelford (69) meet at midfield for a coin flip in action earlier this year. On a night when Allen was celebrating 100 years of football, the Mustangs defeated Canadian 36-0 last Friday. 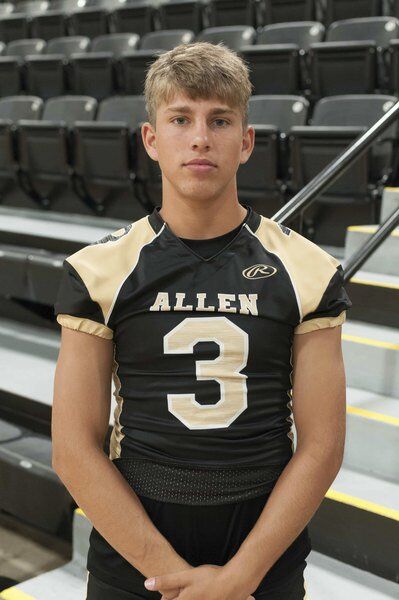 Allen’s Gage Husband (50) and Clayton Shackelford (69) meet at midfield for a coin flip in action earlier this year. On a night when Allen was celebrating 100 years of football, the Mustangs defeated Canadian 36-0 last Friday.

ALLEN — The Allen Mustangs celebrated 100 years of football in style.

On a night when Allen High School football alumni of all ages were in attendance, the Mustangs rolled past Canadian 36-0 before a packed house in Week 3.

Oh, and it was also Homecoming night.

“Our kids played with a lot of energy tonight and maybe played with a little extra motivation,” he continued.”It was Homecoming and we were celebrating our 100th year of football at Allen. At halftime, we honored the Allen football alumni from throughout the decades and many of our players had family members who were recognized.”

Talented freshman quarterback Garret Nix had a night to remember. He rushed for 113 yards and four touchdowns and completed 5-of-9 passes for 38 more yards. Nix’s TD runs covered 15, 67, 10, 82 and 1 yards.

He returned the second-half kickoff 82 yards for a touchdown and also punted the ball three times for a 35-yard average.

Brayden Tatum added 71 yards on 13 carries for the Mustangs. He also caught two passes for 12 yards. Quinton Walker had a 15-yard catch, Coyt Bell had a 6-yard reception and Emmett Koonce caught one pass for five yards.

Leading the way for the Allen defense was Tagus Howard, who finished with 10 tackles and a forced fumble and a fumble recovery. Caden Howard followed with eight stops, while Gage Husband added six tackles.

“Defensively, we rallied to the football, defended the pass and tackled well on the run,” Sullivan said.

Allen, which improved to 2-1 on the year, travels to mounds in Week 4.

ADA [ndash] Graveside services for Alberta May Blackburn, 96, of Ada are 2 p.m. Wednesday at Rosedale Cemetery, Bill Adams will officiate. Mrs. Blackburn passed away Sunday, October 18, 2020, at her home. She was born May 6, 1924, at Cushing, OK to Huey J. and Bertha May Dickey Johnson. She …