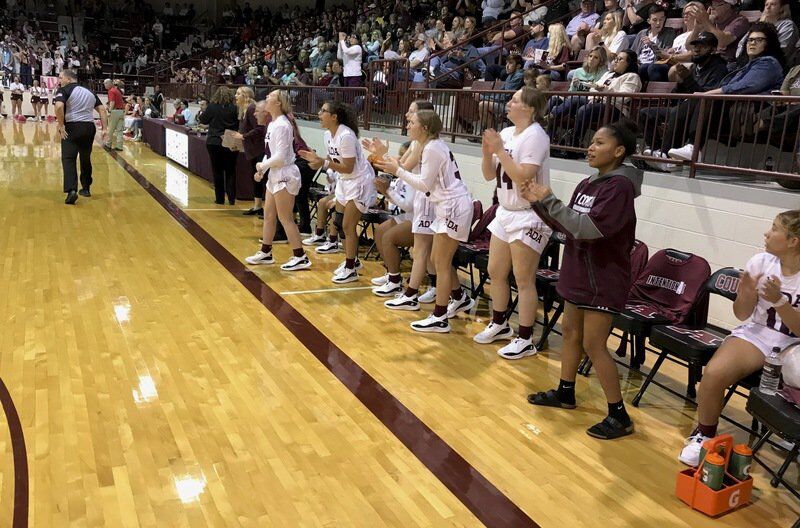 Members of the Ada High School girls basketball team cheer from the bench during the Lady Cougars' 66-53 season-opening win over Kingston Friday night inside the Cougar Activity Center.

Members of the Ada High School girls basketball team cheer from the bench during the Lady Cougars' 66-53 season-opening win over Kingston Friday night inside the Cougar Activity Center.

Wins don't get much sweeter than this.

Then, the Ada High boys basketball team — missing Wyatt Ezekiel Brown from the starting lineup — held off the Redskins 49-47 for a dramatic victory over their own.

In the girls game, freshman Sania Richardson had a dazzling varsity debut for the Lady Cougars. She finished with a game-high 25 points, hit five 3-pointers and also had five rebounds and a pair of steals. Post player Shayla Wofford dominated the paint to the tune of 19 points, 11 rebounds and three blocked shots.

Ada was on the verge of a blowout but Kingston rallied to stay within striking distance.

The boys game was a dogfight from the word go. Both teams played great defense throughout.

Devon Maccollister led the Ada offense with 24 points, while Camryn Reed followed with 12. Maccollister also had three rebounds, four assists and four steals, while Reed added five rebounds and a pair of takeaways.

A full report from Friday's contests will appear in Tuesday's edition of The Ada News.