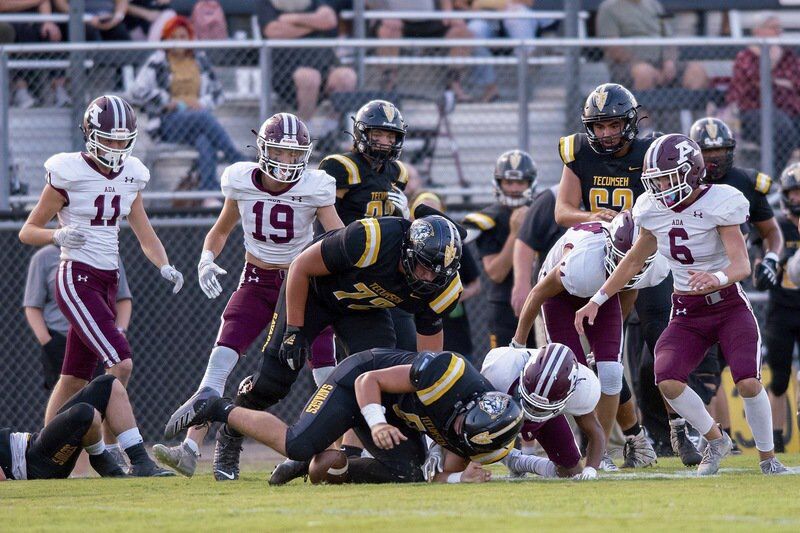 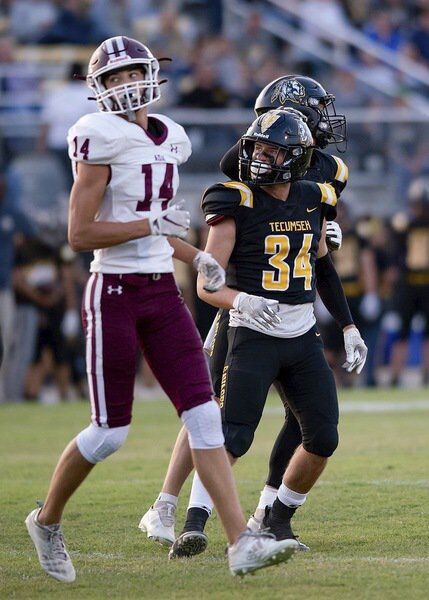 Tecumseh’s Dylan Graham (34) can’t believe the record-breaking night by Ada’s Andrew Hughes. The junior receiver caught nine passes for a school-record 250 yards and three touchdowns to help the Cougars rally past the Savages 42-27. 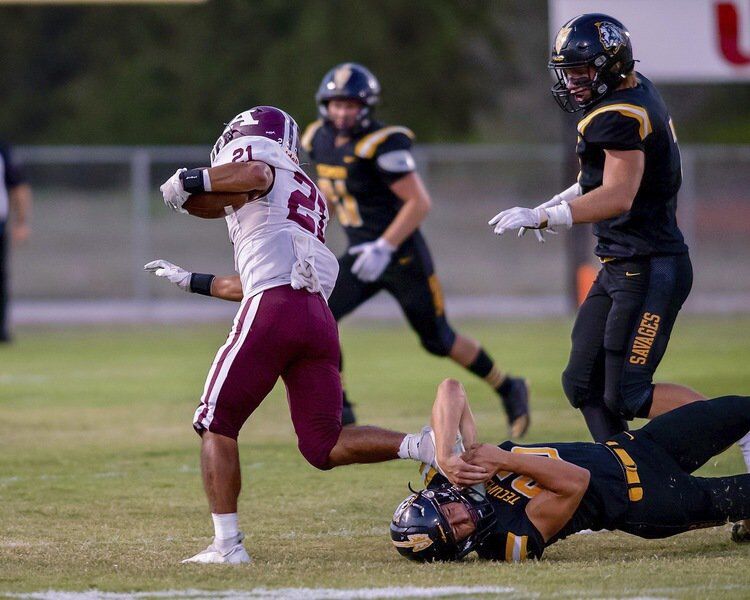 Ada running back Darius Gilmore (21) tries to pull away from a Tecumseh defender on Homecoming night at Savage Field. Gilmore finished with 53 yards on 12 carries. 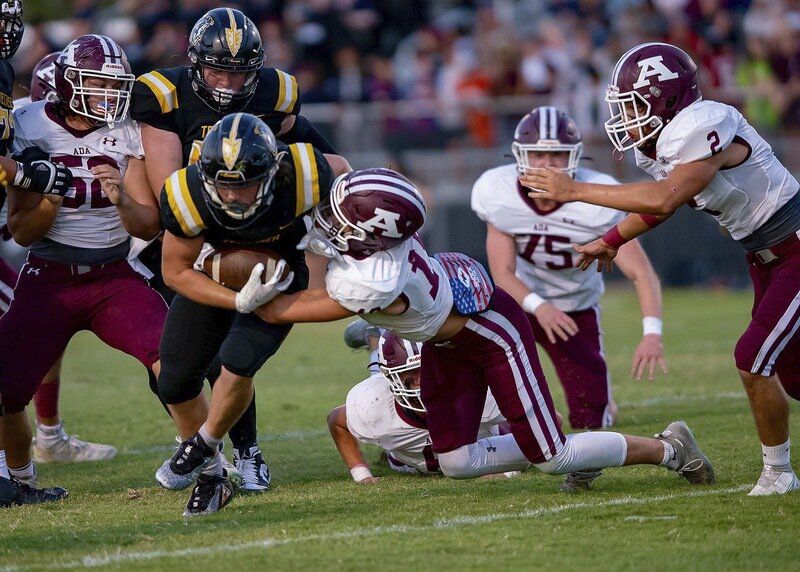 Ada’s George Maddox (19) grabs a Tecumseh runner and gets help from Caden Balthrop (52) and Nate Richardson (2) during a District 4A-2 contest Friday night in Tecumseh. Maddox recorded a team-high 10 tackles in the Ada victory.

Tecumseh’s Dylan Graham (34) can’t believe the record-breaking night by Ada’s Andrew Hughes. The junior receiver caught nine passes for a school-record 250 yards and three touchdowns to help the Cougars rally past the Savages 42-27.

Ada running back Darius Gilmore (21) tries to pull away from a Tecumseh defender on Homecoming night at Savage Field. Gilmore finished with 53 yards on 12 carries.

Ada’s George Maddox (19) grabs a Tecumseh runner and gets help from Caden Balthrop (52) and Nate Richardson (2) during a District 4A-2 contest Friday night in Tecumseh. Maddox recorded a team-high 10 tackles in the Ada victory.

TECUMSEH — It wasn’t the prettiest football game at times, but Ada head coach Brad O’Steen and his Cougars will take it.

Ada spotted Tecumseh a 14-0 lead, overcame a bushel of penalties and four turnovers and piled up over 450 yards of total offense and used a big second half to sink the host Savages a 41-27.

It was also Homecoming Night at Savage Field.

“The biggest thing that I’m proud of is we came into a hostile place, had a lot of calls go against us, spotted them a big lead and our young football team responded and handled it,” O’Steen told The Ada News following the game, which lasted three hours and 12 minutes.

In a game that saw a little bit of everything, O’Steen didn’t know what to address first.

To say the game was marred by penalties would be an understatement. There were 34 penalties accepted (and probably four or five that weren’t) for a whopping 358 yards. The Cougars were flagged 19 times for 193 yards (this may be a school record), while the Savages collected 15 penalties for 165 yards.

There was an official record shattered by Ada junior Andrew Hughes. He ended a huge night with nine catches for 250 yards and three touchdowns — and nearly had a fourth TD but was forced out of bounds a the THS 2-yard line with just under three minutes left in the game. The previous single-game receiving mark was set by Easton Pingleton, who had 206 yards against Oklahoma City Douglass back in 2012.

Hughes deflected some of the credit to Ada junior quarterback Carter Freeland and the Cougars’ gutsy offensive line.

“Part of it was the time our quarterback had with the O-line. They held their blocks and the quarterback threw some good balls and I came down with them,” Hughes said amidst the postgame celebration.

There were several times Hughes simply out-jumped a THS defender — he is a state champion in the high jump for a reason — to come down with an acrobatic catch.

“I like to talk to my quarterback about getting the ball up high so I can go up and try to make a play on it,” Hughes said. “It was a big win for us. We knew it was big to try and start districts 1-0.”

Hughes scored Ada’s first two touchdowns of the game — the first a 9-yard TD reception at the 1:19 mark of the first quarter after Tecumseh had raced to a 14-0 lead and the second that covered 41 yards despite pass interference from a Tecumseh defender at the 3:51 mark of the second period.

Ada used a pair of Tecumseh penalties and a Freeland to Hughes connection to get to the THS 5-yard line with 11 seconds left in the second quarter. However, that drive ended when Daveon Mays picked off one of the few Freeland mistakes on the night.

Freeland had by far the best varsity game of his career, completing 14-of-22 passes for 340 yards and five touchdowns with one interception. Jack Morris caught two passes for 65 yards — including a beautiful 46-yard touchdown catch and run at the 2:03 mark of the third quarter that put Ada on top for good at 32-27.

Hughes made a giant 70-yard touchdown catch on a 3rd-and-24 play at the 7:51 mark of the third quarter. He caught a potential two-point pass after the score, but he came down with it out of bounds, leaving Tecumseh clinging to a 27-26 lead.

Sophomore tailback Xander Rhynes scored Ada’s final touchdown of the game on a nifty 38-yard touchdown run right up the middle of a tiring Tecumseh defense with 9:18 left in the final period. Sophomore soccer player Caden Mitchell, who is Ada’s kicker, drilled the PAT to put Ada ahead 39-27.

The Cougars’ final points came when Fisher Marr — another one of Ada’s scrappy sophomores — tackled Tecumseh quarterback Monte Valois in the end zone for a safety with just 2:18 to play. Marr also had an interception that stopped another Savage drive late in the third quarter. He also added two catches for 18 yards on offense.

Tecumseh’s ground and pound game was every bit as good as advertised. Tailback Dylan Graham led the Savages with 11 carries for 100 yards and a touchdown. Chad Wynn followed with 62 yards on 18 carries. The Savages ended up with 251 rushing yards on 54 attempts.

Ada had four turnovers — one interception and three lost fumbles while the Cougars picked off Tecumseh twice and had one fumble recovery. Morris had Ada’s other interception.

Maddox led the AHS defense with a game-high 10 tackles, while Nate Richardson added 5.5 stops and a sack. Tayden Coleman had two big quarterback sacks for Ada.

The Cougars are back home in Week 5 when 10th-ranked Blanchard visits Norris Field. The Lions ran away from John Marshall 42-13 in Week 4 to improve to 3-1 on the year.