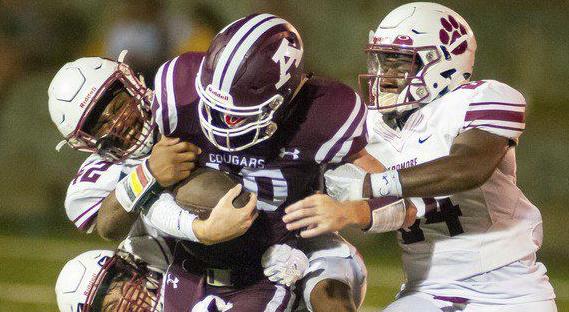 Ada’s Jake Shannon carries three Ardmore defenders with him as he fights for extra yardage during a Week 1 victory over the Tigers last Friday at Norris Field. 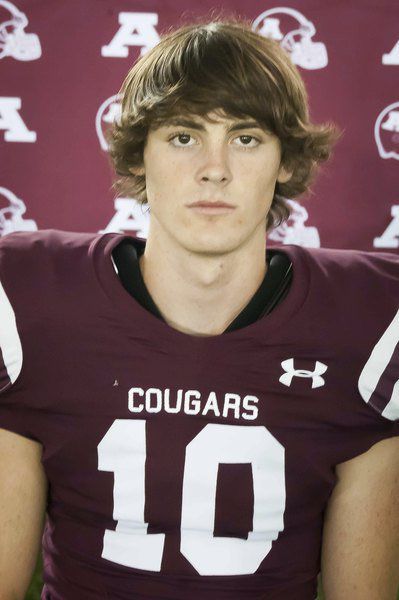 Ada’s Jake Shannon carries three Ardmore defenders with him as he fights for extra yardage during a Week 1 victory over the Tigers last Friday at Norris Field.

By my count — and I could have missed one because it seemed like he was all over the field all the time —  senior Jake Shannon played in six different spots for the Ada High School football team during the Cougars’ sweet Week 1 win over old rival Ardmore.

After the game, I caught up with Shannon and asked him about being Mr. Versatile. The first thing that he talked about was his surprise appearance as the team’s punter early in the second quarter.

That’s about the only thing he did that didn’t work out like he had planned.

“I kicked a 6-yard punt, and I never went back to punt again,” Shannon reminded fans who may have missed it.

All joking aside, Shannon was a warrior for the Cougars against Ardmore. He lined up at receiver, where he hauled in three catches for 70 yards. He played well in the secondary as a cornerback.

Folks are used to seeing Shannon at those two positions. But he also returned punts, was on the kickoff return team and was one one of four Ada players to take snaps at quarterback.

“Jake is a very selfless young man that wants to win. He has prepared himself to be available to do whatever is necessary for our success,” said Ada head coach Chris Berus. “He played fearlessly Friday night.”

Starting quarterback Zac Carroll was batting cramps and dehydration issues most of the night and had to be relieved. Backup quarterback Manny LaValley eventually suffered a hand injury. So Shannon, who is this year’s scout team quarterback but has taken a few varsity snaps during his career, was asked to fill in for a few plays against the Tigers.

After making a nice 34-yard catch to get Ada out of the shadow of its own end zone late in the third quarter, Carroll was shaken up and Shannon moved to quarterback the very next play.

Shannon helped move the Cougars into Ardmore territory — he scampered up the middle for a 10-yard game on his second carry — and helped Ada flip the field.

“I just try to work on everything they tell me to do in practice. I’m just ready when they need me to do that stuff,” Shannon said.

Shannon wasn’t the only one pulling extra duties. There were many. Wide receiver and secondary defender Bo Odom also took over a series at quarterback while Shannon was dealing with cramps and helped Ada get a valuable first down late in the game.