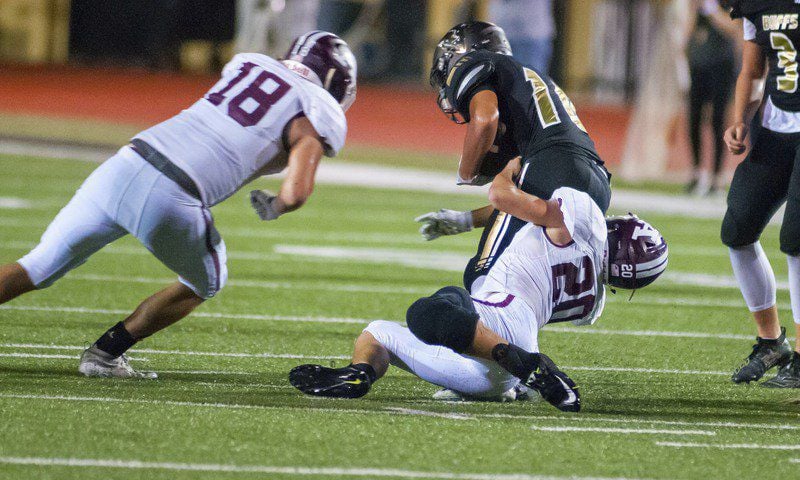 Ada defenders Austin Eastwood (18) and Jessie Campbell (20) team up to tackle McAlester’s Layne Jarrett (10) during their Week 5 clash last Friday at Hook Eales Stadium. The Cougars travel to Glenpool this Friday for a 7 p.m. contest with the host Warriors. 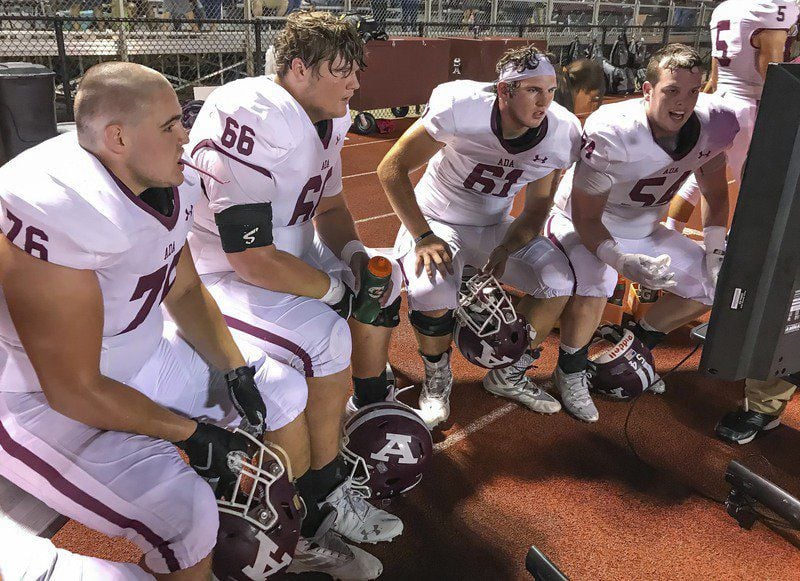 Ada linemen Nathan Thomas (76), Cole Todd (66), Wyatt Jarvis (61) and Jaycob Gray (54) watch a video replay on the sidelines during the Cougars’ 42-26 win over McAlester on the road in Week 5. Ada is back on the road Friday night with a 7 p.m. District 5A-3 matchup with Glenpool. 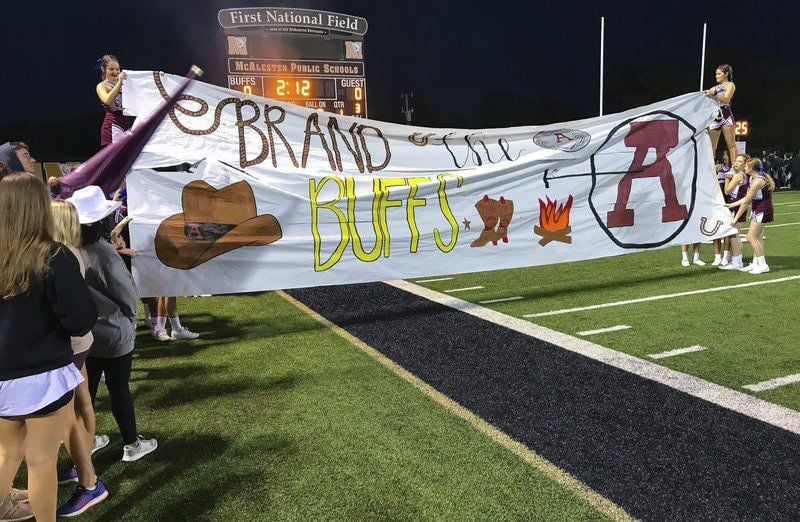 Ada High School cheerleaders hold up a "Brand the Buffs" sign minutes before the start of last Friday's football game between the Cougars and host McAlester.

Ada defenders Austin Eastwood (18) and Jessie Campbell (20) team up to tackle McAlester’s Layne Jarrett (10) during their Week 5 clash last Friday at Hook Eales Stadium. The Cougars travel to Glenpool this Friday for a 7 p.m. contest with the host Warriors.

Ada linemen Nathan Thomas (76), Cole Todd (66), Wyatt Jarvis (61) and Jaycob Gray (54) watch a video replay on the sidelines during the Cougars’ 42-26 win over McAlester on the road in Week 5. Ada is back on the road Friday night with a 7 p.m. District 5A-3 matchup with Glenpool.

Ada High School cheerleaders hold up a "Brand the Buffs" sign minutes before the start of last Friday's football game between the Cougars and host McAlester.

The Ada Cougars hope to ride the wave of momentum they gained with a win over archrival McAlester into a Week 6 road trip to Glenpool.

Kickoff is scheduled for 7 p.m. Friday at the Glenpool High School football field.

Ada is coming off an impressive 42-26 win road win over McAlester that evened its record at 2-2 overall and 1-1 in District 5A-3 play. The Warriors defeated Tulsa Hale 22-0 last week and have won two of their last three games to improve to 2-3 and 1-1.

“It’s great to have success and still have a lot of things to work on. You focus better,” said Ada head coach Chris Berus. “We have to maintain this momentum as we go through district play. We have to be great road warriors.”

Ada piled up over 300 yards of total offense against the Buffaloes and showed some big-play ability with a 99-yard touchdown catch and run from quarterback Jake Shannon to wideout Bo Odom (it was actually 99 and a half yards and is a record that can never be broken, only tied) and an 80-yard rushing touchdown from tailback Tyler Peters.

Berus said the Cougar offense took a big step from a 14-13 loss to Coweta to last week’s win.

“We came out and had a couple of big plays that went the distance for us and put a lot of points on the board in the first half. We also had a nice drive to start the second half. We grew on the offensive side of things,” he said.

Berus also saw a lot of good things from the Ada defense on film from the McAlester game.

“Defensively, we played hard. There were some BIG hits Friday night. I still believe the team that wins the hitting game usually wins the football game. That was fun to watch — the way our kids were flying around,” he said. “There were a lot of positives to take away from Friday night. We showed a lot of perseverance and fight throughout the ballgame.”

Both teams were hit hard by the penalty flag. Ada had 16 penalties for 144 yards, and McAlester was flagged 18 times for 149 yards. A number of penalties on both sides were for unsportsmanlike conduct.

“We have a little discipline factor right now, and that falls on my shoulders. But we’re stressing it and working on it,” Berus said. “There were times when we got caught up in the emotion of things, but it didn’t define us, which was good. We overcome those self-imposed obstacles.”

Berus said the film review showed the Ada coaching staff plenty of things to work on.

“It was kind of the perfect storm. You walk away with a victory over a good football team with some positive things, but there are enough things that we have to work on to get better, and we came back this week and that’s where our focus is,” Berus said. “We want our kids to understand we’re a long way from where we can be. That’s the goal right now, getting us to be our very best, not just good enough.”

High-powered Tulsa Edison rolled to a 50-0 win over the Warriors in Week 4 before Glenpool bounced back with its victory over Tulsa Hale.

The Warriors, under the direction of veteran head coach Steve Edwards, have already matched their win total from 2018.

“Glenpool is well-coached. Coach Edwards has been there for a long time (24 years). They do what they do. Their kids are still running the same system. I remember playing against them in the early 2000s, and they’re running the same stuff,” Berus said.

No 2019 statistics were made available to The Ada News by press time, but the GHS offense is likely to be centered around senior running back Makai Blades, who won the Class 5A 100-Meter Dash last spring and finished second in the 200-Meter Dash. Edwards is also a threat at catching the ball out of the backfield.

“He’s fast. He has some juice. They also have a receiver that can go yard on you if you’re not defending him well,” Berus said. “On offense, they run some power, stretch and lead stuff. They’ll use some fake motion and pop it to the tight end or hit a slant to a receiver.”

Glenpool will employ a 4-3 defensive scheme.

“They’re very fundamentally sound in everything they do. They’re not going to make mistakes to hurt themselves,” Berus said. “We’ve got to go earn our yards and make sure our gaps and zones are defended.”

Junior linebacker Gus Edwards is among the Warriors’ defensive leaders.

Ada senior defensive lineman Jaycob Gray made an impressive one-handed catch of a tipped ball for an interception against McAlester last week.

What he did after that was even better. He rumbled down the field and avoided some would-be tacklers before finally being stopped just short of a touchdown.

Then, Gray enthusiastically spiked the ball, and a flag flew for unsportsmanlike conduct.

“The play was phenomenal until the spike at the end. You make a play like that, but instead of it being 1st and goal from the 1, you move back,” Berus said.

“Jaycob is a good athlete and has good ball skills. He did a great job of playing that ricochet and grabbing it. You could tell he had played that in his mind a few times, because he knew exactly where he was going. He made some cuts down the field. It was a great play. We just have to control our emotions a little bit,” Berus said. “We can learn and grow from things like that.”