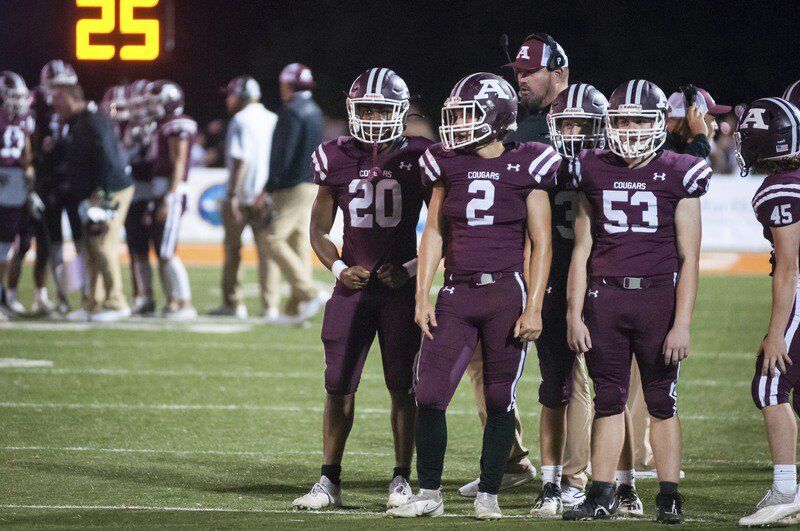 Ada assistant coach Seth Adams has a few words with Kendre Grant (20), Nate Richardson (2), Max McKinney (38) and J.B. Coyle (45) during a Week 8 contest with No. 1 Tuttle at Norris Field. The Cougars travel to Cushing Friday night to take on the fourth-ranked Tigers. Kickoff is scheduled for 7 p.m. at O’Dell Field. 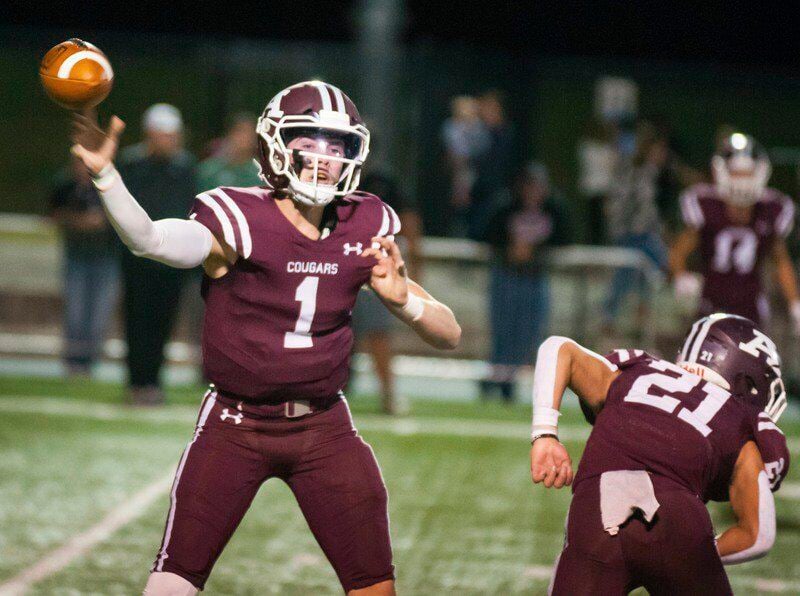 Ada junior quarterback Carter Freeland (1) has completed 93-of-167 passes for 1,441 yards and 15 touchdowns so far this season. 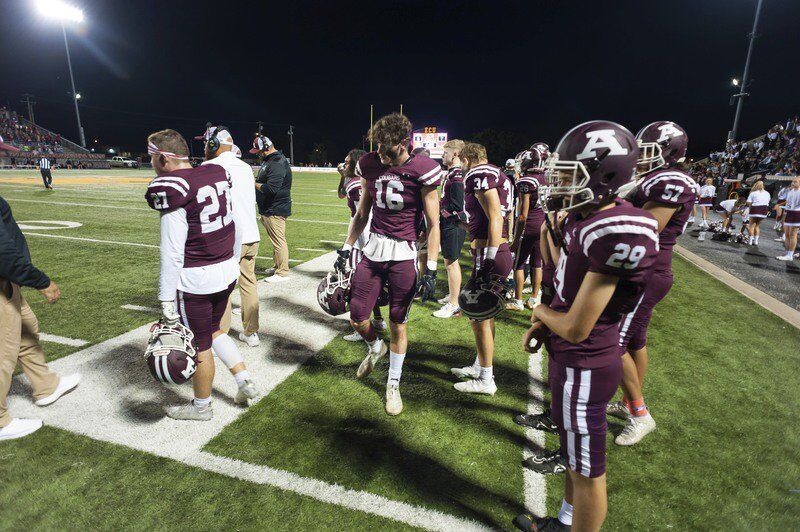 Ada players watch the action from the sideline during last week’s District 4A-2 matchup with top-ranked Tuttle.

Ada assistant coach Seth Adams has a few words with Kendre Grant (20), Nate Richardson (2), Max McKinney (38) and J.B. Coyle (45) during a Week 8 contest with No. 1 Tuttle at Norris Field. The Cougars travel to Cushing Friday night to take on the fourth-ranked Tigers. Kickoff is scheduled for 7 p.m. at O’Dell Field.

Ada junior quarterback Carter Freeland (1) has completed 93-of-167 passes for 1,441 yards and 15 touchdowns so far this season.

Ada players watch the action from the sideline during last week’s District 4A-2 matchup with top-ranked Tuttle.

There’s a good chance that the already young Ada High School football team will look a little younger at the start of this week’s contest with host Cushing.

Kickoff is scheduled for 7 p.m. at O’Dell Field.

Ada head coach Brad O’Steen told The Ada News Wednesday morning that as many as five freshmen could work their way into the starting lineup against the Tigers, mostly along the offensive line. The new lineup could include freshmen Makir Sanusi at right guard, Isiah Hayden at left tackle, Caleb Sun Eagle, tight end and Deonte Lindsay at receiver.

Come game time, a few may not start but every one of them will get into the game.

“It’s competition. Every job is open every day. They’re definitely going to play. They’ve earned the playing time. Those guys are working hard and coming off the ball,” O’Steen said.

The Cougars will need all hands on deck against a Cushing club that is coming off a 27-13 win over No. 10 Blanchard.

O’Steen said while the pass-happy Tigers will present their own type of challenge, it will be different than lining up against Tuttle, which ran away from the Cougars for a 53-6 victory in Week 8.

“Cushing’s a very good ballclub, but they aren’t Tuttle. Tuttle wows you,” he said.

“They throw the ball really, really well. They have a good quarterback, a good running back and have several guys that can go catch it. They’re a solid ballclub,” O’Steen continued. “They just don’t have those wow-you kids like Tuttle does.”

The Cushing offense is centered around junior quarterback Blaze Berlowitz, who has been fantastic so far this season. He has completed 158-of-250 passes for 2,343 yards and 25 touchdowns and nine interceptions. Berlowitz has Cushing averaging 26.5 points per game.

Junior running back Noah Jones leads the CHS ground attack with 672 yards and six TDs on 83 carries. Berlowitz can also take off and run. He has 199 yards rushing on 28 carries and a pair of scores.

Junior linebacker Riley Matheson leads the Cushing defense with 116 total tackles. Lane Yaunt is next with 63 stops and four interceptions.

“Defensively, they have one of the most basic defenses you play,” O’Steen said. “They just don’t make a lot of mistakes and keep everything in front. They make you be consistent on offense. They’re not going to give up big plays. They’re just going to play good, fundamental defense.”

Ada started well enough against the top-ranked Tigers in Week 8, moving down the field and scoring a touchdown on the first possession of the game.

But back-to-back Ada turnovers — one during a kickoff and a lost fumble on the first play of Ada’s second drive of the game — gave Tuttle all the momentum.

“The kids came out and I thought we were mentally and physically ready to go play. We came out of the gate and went and scored on the No. 1 team in the state,” O’Steen said.

“Then we turned over the ball twice. You had some positive things happen and then those two things happened,” he continued. “If we could have kept ourselves in the ballgame at halftime you never know what might happen in the second half. You just can’t turn the ball over like that and give the No. 1 team in the state two easy possession right there.”

O’Steen said his team kept battling against Tuttle despite the lopsided score.

“At one time I stepped back and looked in the second half when we were on defense and every one of my coaches were coaching hard and there were a lot of positive things happening,” he said. “We’re going to build off the positive things.”

O’Steen said his young and inexperienced club simply isn’t ready to go toe-to-toe with a team the caliber of Tuttle.

“We’re winning a lot of small battles that people don’t see. They just see the end result on the scoreboard. As a program, we’re just not ready to compete at Tuttle’s level yet,” O’Steen explained. “But we’ll get there. Suiting up close to 60 kids is a big positive. I think they ended last year at around 25-30 and graduated 13 of those.”

O’Steen said at one point against the Tigers, Ada had four freshmen roaming around the field on defense.

“That’s huge for those guys. They’ve seen the lights and played against the No. 1 team in the state. That’s a pretty big stage for a freshman. I was proud of them,” he said. “We are playing a lot of guys who simply aren’t physically developed strength-wise. It just takes time.”

O’Steen said he and his coaching staff used the loss to Tuttle as a learning tool.

“We learned a lot from them. We showed our kids how they use their hands and where we have to go,” he said.

One this is for sure. O’Steen’s troops will continue to work hard and battle through Ada’s final two games of the 2021 season — Friday at Cushing and at home in Week 10 against Classen SAS.

“I’m proud of our kids and our coaches. They show up every day and have a good attitude. The kids are ready to learn and get better and as long as they keep doing that we’re going to be fine,” he said.

“We’ve cranked it up even harder in the weight room. I usually don’t lift this heavy this late in the season but we’re cranking it up,” O’Steen continued. “When you’re out of the playoff picture, it’s time to start preparing for 2022.”

COUGAR NOTES: Ada sophomore linebacker-fullback Fisher Marr is expected to return to the Ada lineup after sitting out a game with an injury. ... Ada junior linemen Caden Whitehead missed Ada’s first two practices of the week due to an injury and illness but O’Steen believes he should be able to play Friday night. ... Through eight games, sophomore linebacker George Maddox leads the Ada defense with 46.5 tackles. He also made his debut at punter last week against Tuttle and had four kicks for an average of 35.8 yards per punt. His longest punt went for 46 yards.