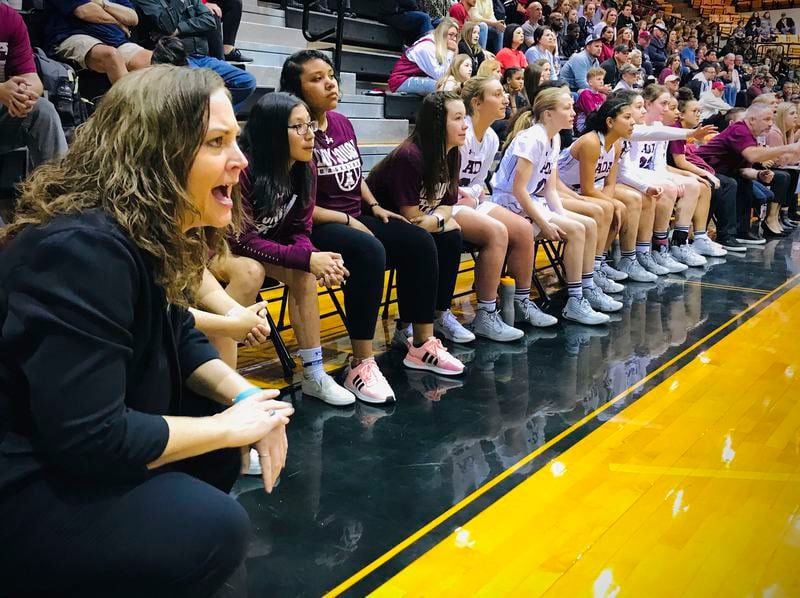 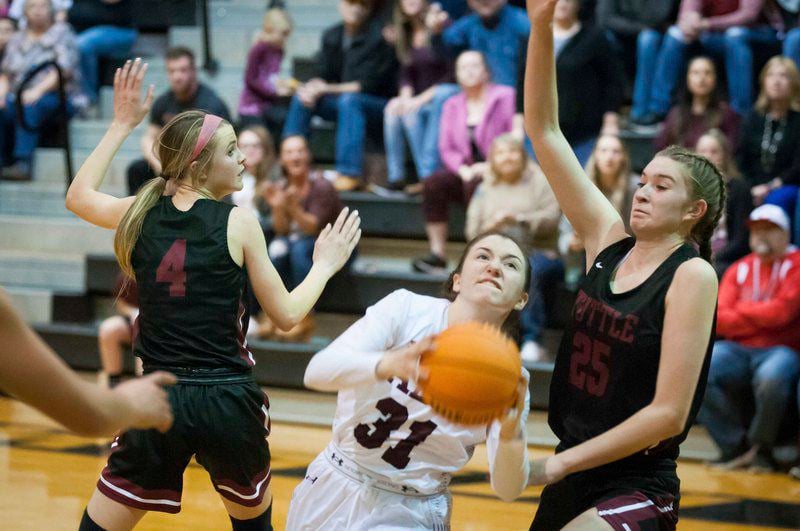 Ada junior Landyn Owens (31) splits two defenders on the way to the basket during a Class 4A Area Tournament contest. Owens admitted she’s having trouble finding places to shoot the basketball nowadays.

Ada junior Landyn Owens (31) splits two defenders on the way to the basket during a Class 4A Area Tournament contest. Owens admitted she’s having trouble finding places to shoot the basketball nowadays.

Ada High girls basketball coach Christie Jennings is used to being on the go all the time.

Like many others, her get up and go has come to almost a screeching halt thanks to the new coronavirus pandemic.

“I’m used to a go, go, go life. This has been pretty strange and hard to get adjusted to,” Jennings said.

Jennings hasn’t been with her team as a whole since March 11. The Lady Cougars just missed out on earning a Class 4A State Tournament berth. Jennings had gone to the Oklahoma City area only hours before learning the state tournaments for Classes 2A-6A had been postponed.

School was out the next day (March 13), and then state schools were shut down. Usually, this is a busy week for the Lady Cougars.

“Typically, what we do after spring break is start with our exit interviews. We talk a lot about their strengths and weakness from the season. After we do that, we come up with a plan for each player to improve individually. We also start our toughest strength and conditioning program of the year. This lasts six weeks before we change up the program,” Jennings explained.

Jennings said some of her players are looking farther ahead in hopes that summer basketball isn’t canceled. Some are concerned they can’t improve their games during this time of shutdowns.

“I have had some texts from my kids worried about AAU and summer basketball. I have several junior high and high school kids who were supposed to be playing in a few weeks. They are concerned about regressing and not getting better,” she said. “I’ve assured them that everyone is in the same boat. I’ve tried to ease their worries and give them something productive to do. I’ve suggested that they update their highlight videos, or that they go watch each game of the season and note it like their coaches would. They may not be able to physically get better, but they can become smarter basketball players during this time. They are scared and worried. The kids that know they want to play at the next level are worried it may hurt them bad in the long run. “

Ada junior Landyn Owens, one of the top playmakers in the area, said she’s had a tough time finding places to put up some much-wanted shots.

“It’s pretty tough for me right now because every gym I try to go to has been closed. I’m fixing to start just going to shoot at a neighbor’s goal,” she said.

Jennings said backyard basketball, especially when the weather cooperates, may be the new norm for a while.

“Not to be a pessimist, but realistically this could be ongoing for quite some time. We could potentially miss summer basketball. We may start seeing more kids out in their driveways putting up jumpers,” she said.

Jennings said she and assistant coach Leslie Landrum are currently planning some things their players can do at home to replace the six-week offseason workouts they will miss. The new workout should be available next week.

“As far as sending at-home workouts, I have sent some free resources out that trainers are releasing on social media,” Jennings said.

Jennings said it’s for sure unique to be looking for things to do in late March and early April. For the past number of years, she has always attended the NCAA Division I Women’s Basketball Final Four. That event was canceled two weeks ago.

“I have been cleaning and decluttering. There also have been some good free coaching resources on social media. I’ve been looking through all of it,” she said. “I have tried to stay home and away from everyone, with the exception of checking on my mom. She lives next door, and I’ve been checking on her every day. It’s been a long week.”